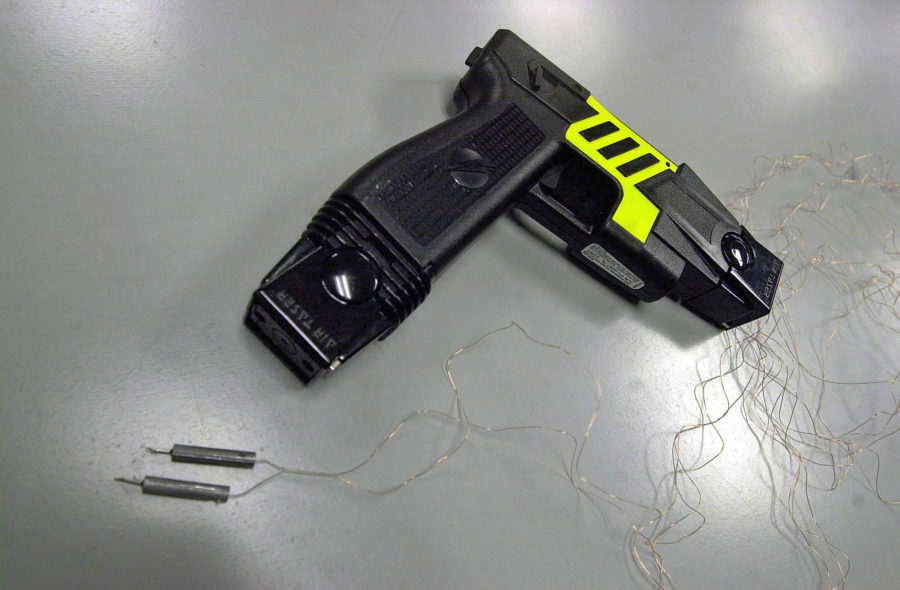 In 2004, unsteady relations between the Champaign Police Department and the community showed as a proposal from the police for Tasers was met with a hostile reaction and negativity. Eleven years later, the Champaign Police are requesting Tasers once again. This time, things are a little different.

Champaign Police Chief Anthony Cobb appeared along with three other representatives from the force in front of the Champaign City Council on Tuesday to seek approval for the department to draft an official bill for Tasers. The Champaign Police attained a 6-3 vote, giving them approval to draft a bill.

Council member Clarissa Nickerson Fourman said that community attendance for the meeting was low compared to 2004, citing improved relations between the Champaign Police and the community and their work with the Champaign Community Coalition as a big reason for a calmer community response.

CPD offered several different reasons for the necessity of Tasers, but reducing officer and citizen injuries was one of their major rationales. In the presentation, the Champaign Police provided a 2009 study by the National Institute of Justice and the Police Executive Research Forum that shows how Taser implementation has affected injury numbers with departments similar to Champaign. The study found that Tasers reduce 40 percent of citizen injuries and 70 percent of officer injuries.

In 2014, almost 13 percent of Champaign Police officers were unserviceable due to injury.

“We believe that in many of the injuries reported, many could have been prevented with a Taser,” Deputy Chief Joe Gallo said in the council meeting.

Council member Michael La Due was one of the six approvers of the motion. He believes Tasers are a valuable tool to help reduce physical altercations and possible injury.

“There was one incident in Urbana where there was a suicidal subject who had a knife, who wouldn’t drop it, and he was going to harm himself with it,” LaDue said. “They used a Taser, and that ended the crisis.”.

Fourman was one of the dissenters for the case. Though Fourman understands the benefits of implementing Taser use, she worries that it won’t improve community relations with the police.

“The police are here to protect, we want people to feel that the police are there for them,” Fourman said. “I just don’t want the public to think the police are asking for Tasers in order to have more control.”

The proposed Taser technology will make sure of the transparency of every incident. When the safety switch is turned off, the Taser will immediately start recording audio and video. The Taser is also limited to only five-second bursts.

“Our department is becoming more transparent,” Cobb said in the meeting.

La Due believes that the technology and accountability with the new Tasers sets it completely apart from the 2004 proposition.

The request from the Champaign Police is for 25 Tasers, only assigned to select officers by Cobb, as opposed to the six Tasers the Urbana Police Department received.

This compares to 33 cases involving chemical spray and 184 cases in which officers drew their weapons and pointed.

La Due cites the Taser as a necessary “rung in the ladder” between physical altercation and weapon use.

“You have an increment that you can reach for that doesn’t include striking someone with a baton,” La Due said. “Any use of force has a risk. It’s best having to avoid to use force, and I think that generally the police, particularly now with our new policies, have to pass a fairly high bar to justify the use of force.”

Fourman and La Due both believe the request for Tasers will not make any drastic changes to campus safety and force for University students.

“I feel that when the kids come down, they’re down in Champaign, they’re enjoying themselves, I don’t want them to be deterred from coming because they think they’re going to get tased. I don’t think the students would have that fear,” Fourman said.