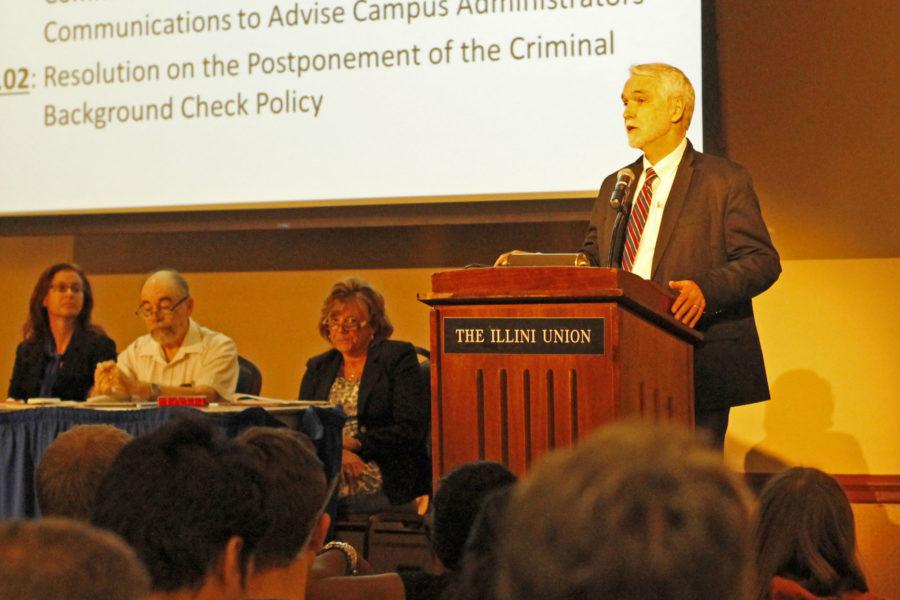 Nick Burbules isn’t afraid of an investigation into his behavior. So long as it’s fair.

In August, Burbules, senate member and general educational policy professor, was implicated as an advisor to former chancellor Phyllis Wise when the University released over 1,100 emails between University administrators, professors and external consultants.

Burbules and Joyce Tolliver, fellow senate member and associate professor in Spanish, were frequently involved in communications with Wise and other administrators. Their involvement raised concerns among the senate and Senate Executive Committee.

As a result, a group of senators led by Mark Steinberg, history professor, proposed a resolution “concerning the formation of an ad hoc committee concerning senators’ in use of non-official communications to advise campus administrators” at the Monday Academic Senate meeting. The resolution called for a senate committee to be formed to determine what, if any, senate “procedures, ethical norms or best practices of shared governance,” were violated and to determine what steps should be taken to reinforce and maintain those procedures.

Before the senate could begin a discussion about the resolution, Tolliver proposed a motion to move the recommendation to the committee on University Statues and Senate Procedures who would investigate and report findings to the senate. Tolliver argued the use of personal email is not against University procedures; additionally, she questioned whether the senate has the authority to create such a committee to investigate the use of personal email.

If so, Tolliver said USSP still determine what the scope of the investigation should be and ensure that it is consistent with state law and University rules.

Senators raised concerns about taking the issue out of the public eye and delaying the process. William Maher, University library, informed the senate that USSP is not an ethics committee and is not versed in evaluating ethical issues,

Mark Steinberg, professor in history, reiterated Interim Chancellor Barbara Wilson’s earlier statement that the University administration needs to reestablish itself as trustworthy. He said the establishment of an ad hoc committee was a good start to increased transparency and trustworthiness and urged senators not to approve Tolliver’s motion.

“I am not afraid in anyway of a fair investigation of my behavior in any venue, whatsoever,” Burbules said.

However, he questioned whether the investigation would be fair and noted that he was not named in the resolution but is “certainly” one of the people the ad hoc committee would look at.

The senate voted not to send the recommendation to USSP and voted against the resolution itself.