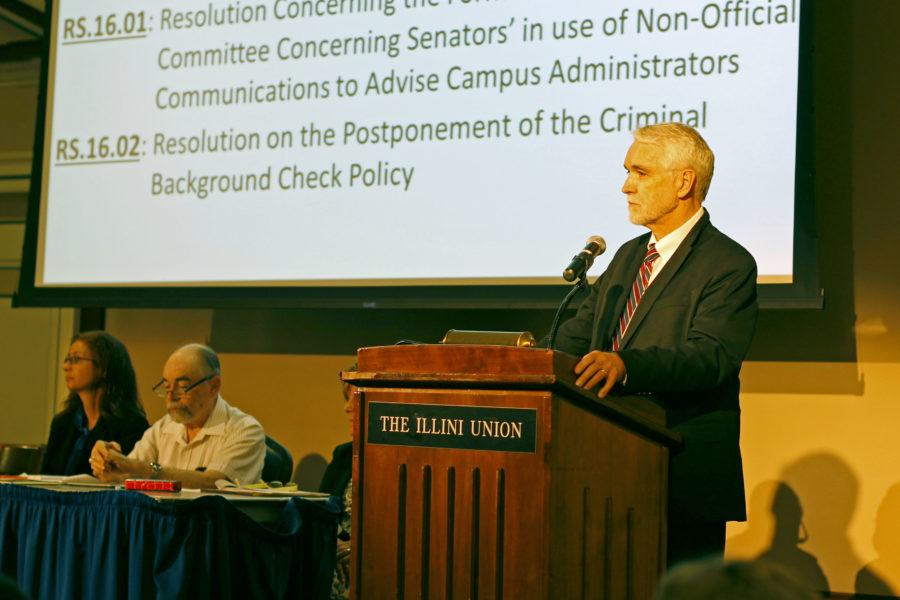 The Academic Senate approved a chancellor search process Monday but whether that will include an external search firm remains undecided.

Killeen said he’s open minded to whether the University needs to hire a search firm for what he described as an “incredibly important leadership role.” He said he’s seen firms used successfully and times when it hasn’t worked out. Additionally he said he knows there is some concern amongst University members about “who might want to come into a situation where there’s obviously been a little bit of churn,” but he believes the University will be able to secure the chancellor it needs.

“If we don’t find the right match we will proceed, but I’m confident we will find a group that will be able to tailor their process to what we need on this campus,” he said.

Kathryn Oberdeck, history professor, said executive search firms also make her ancy and asked Killeen if he would be open to a written understanding about the role and limits of an external firm’s participation in the search process. Killeen said he would be open to it but does not expect a search firm to be limited too much.

He said he is also interested in hearing from external stakeholders such as donors and even Gov. Bruce Rauner, who he said he knows “first-hand” is interested in the process.

Jay Rosenstein, professor in media, raised concerns about how University candidates would be elected, regardless of a firm’s involvement, and information about them disseminated. The senators agreed to amend the recommended search firm election process to include information about the candidates as well. The full list of candidates and biographies, submitted to the Committee on Committees or nominated on the senate floor, will now be provided to the Academic Senate.

The search committee will be composed of one faculty chair, eight faculty members, three students, one academic professional and one staff member.

Shared governance was stressed at the Monday meeting, and Killeen said it should be stressed in the creation of the search committee as well as by the chosen chancellor. He said he is hopeful the new chancellor will be a “team player” who can both lead and represent the University.

“When it comes down to it we exist to support the students,” Killeen said.