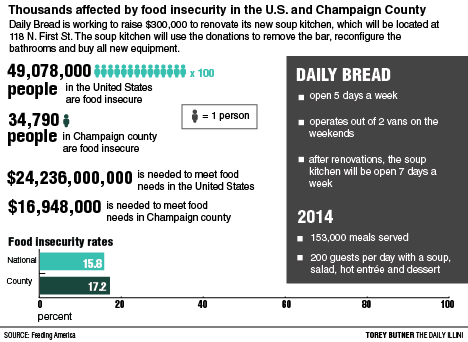 The Daily Bread Soup Kitchen is raising money for a new location to help those that need their services.

After the St. Jude’s Catholic Worker House soup kitchen closed in 2009, many volunteers of the house stayed committed to feeding the hungry in Champaign-Urbana and came together to create the Daily Bread Soup Kitchen, according to the kitchen’s website.

The soup kitchen owners recently purchased what was formerly the Emerald City Lounge, 118 N. First St., and hope to fundraise $300,000 to remove the bar, reconfigure the bathrooms and buy all new equipment. Right now they are renting equipment from the New Covenant Fellowship, where the kitchen is currently located at 124 W. White St.

There they have evolved from handing out 30 sack lunches from New Covenant to serving an average of 200 guests a day with a soup, salad, hot entrée and dessert, according to the website. Last year, the kitchen served over 153,000 meals to their guests.

Karen Pickard, a Tuesday volunteer at the kitchen, said Daily Bread is asking people for donations, and are talking about their fundraising efforts on their Facebook page and website.

“We’re getting the word out, and hoping that the response will be what we need to get the renovations completed,” she said.

Pickard said the kitchen does more than just feed its visitors.

“We help them out in getting a bus pass, getting a state ID and a copy of their birth certificate,” Pickard said. “These are documents that people need so they can go out and look for a job.”

She said Daily Bread is working with an architect to create the best design for their new space. The goal is to transform the dark lounge-like bar, into a welcoming soup kitchen that remains open seven days a week.

The kitchen serves meals at the building location five days a week and serves sack lunches out of their two vans on the weekends, according to the website. After the renovations, the new kitchen will be open seven days a week and replace the two vans they use today.

Not only are the servers volunteers, but the cooks at Daily Bread are, too. Andrew Sofranko, a current cook who has volunteered at the kitchen for 12 years, was volunteering even when the kitchen was at St. Jude’s Catholic Worker House.

Sofranko said he likes cooking and interacting with the people who work there, including University students who volunteer.

He said the kitchen has about 20 people working in the soup kitchen at a time, adding cooperation is important when working with so many people. He said everyone volunteering knows their job and fills in where help is needed.

“At the end of the day you can go home and say I accomplished something,” Sofranko said.

Karen Kane, a board member of the soup kitchen for five years, said the kitchen is “important in the community because we’re the only location where people can walk in and have a nutritious meal without a charge in the Champaign-Urbana area.”

She said some people come from Rantoul or Danville as well.

Kane emphasized the homeless are not the only people who need a free meal. Senior citizens, families with children and disabled individuals also visit the kitchen, and will never be refused at Daily Bread.

“I can’t even really imagine where so many people would find a meal in our community (without Daily Bread),” Kane said. “A lot of people would go hungry.”