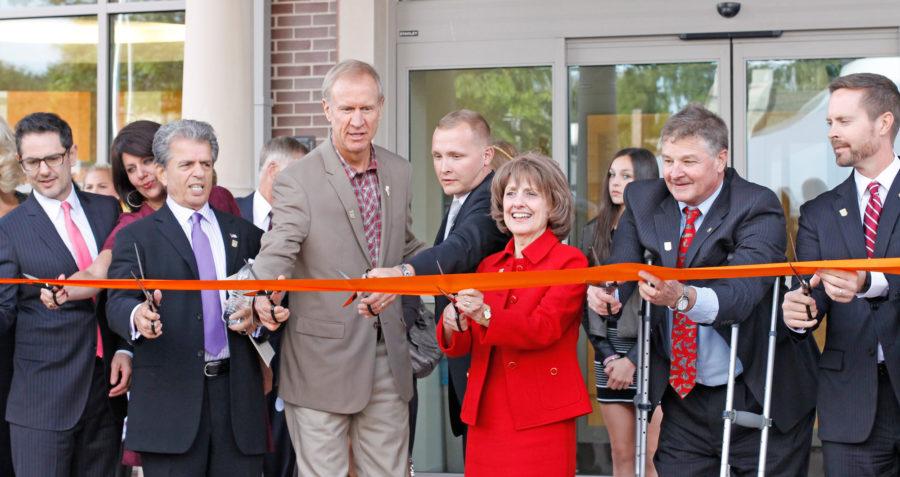 Illinois Governor Bruce Rauner attends the Dedication Ceremony and ribbon cutting for the Center for Wounded Veterans in Higher Education in Urbana on October 2.

Noted as the first of its kind, the University officially dedicated the Chez Family Foundation Center for Wounded Veterans in Higher Education Friday.

Ron L. Chez, president of the foundation for which the center is named, spoke at the ceremony and noted how the efforts of Tim Nugent — Disability Resources and Educational Services founder — gave way to the center’s creation.

“Somebody has to have the doggone pursuit of wanting to get something done and Tim Nugent started that,” Chez said.

The $14 million dollar building provides resources for veterans with disabilities pursuing college degrees and transitioning from military to civilian life.

Gov. Bruce Rauner was also in attendance and spoke to the importance of the center, just as Gov. Pat Quinn did at the groundbreaking in 2013. The center was partly funded through a $4 million investment from Quinn’s Illinois Jobs Now! capital construction program.

Rauner also took the opportunity to thank the veterans directly.

“We are the greatest nation on earth because of the service, the dedication, the commitment and the sacrifice of our service men and women who defended our freedom and democracy,” he said. “For that I thank you.”

Interim Chancellor Wilson noted how the University has long been a pioneer with establishing disability resources and also remembered Nugent’s contributions to veteran and disability centers. Nugent founded DRES in 1948. It has since expanded to serve all students with disabilities.

“Today marks another chapter in that storied history,” Wilson said.

Garrett Anderson, retired U.S. Army Sergeant and Graduate Assistant for the center spoke about how exciting the creation of the center was.

“Today’s been awesome. This morning I woke up, walked downstairs, and the Stanley Cup is sitting in our front room. I touch the Stanley Cup, then of all things, Lou Henson walks in. I was like, ‘Gah! This is great!’ It wasn’t even 11 o’clock yet,” Anderson said.

Carol Owen, who is married to a student veteran, shared in Anderson’s excitement. Owen said it was “wonderful” to have everyone involved in creating the center — be it administrators, donors or veterans — there to celebrate the dedication.

“It’s no mystery why this campus is regarded as one of the best campuses in America for veterans,” Rauner said.”This is a campus, this is a university that cares about people. Its an extraordinary place,” Rauner said.