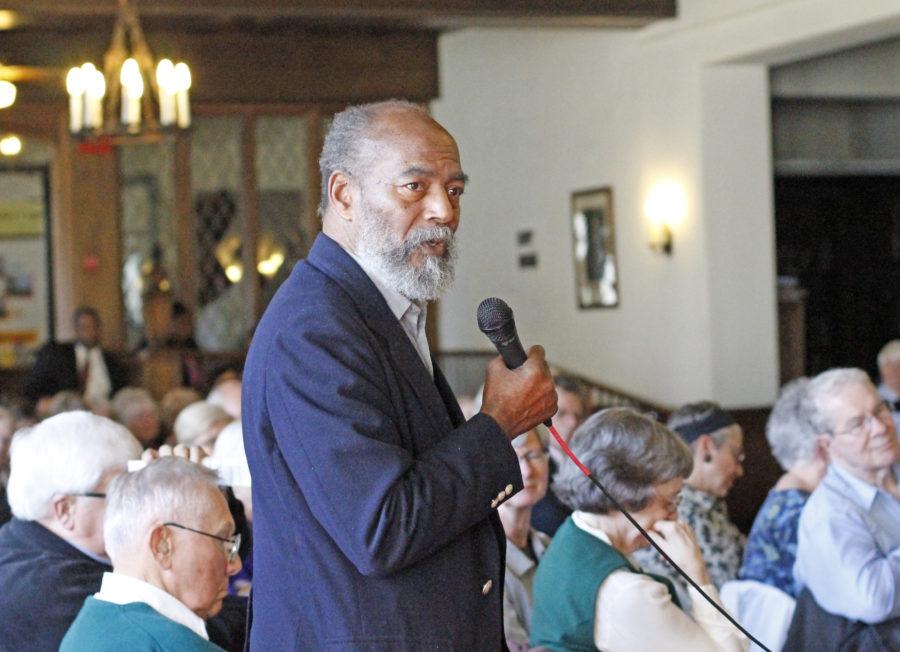 A member of the seminar audience voicing his opinion on the information that has been presented by the panel at Wesley United Methodist Church on October 4th.

The seminar titled “Black and White in America: A Look at Racial Relations and Violence” was held at the Wesley United Methodist Church, Urbana, including a panel of speakers and members of the local community.

“I thought it was exceptionally well-done,” said Judith Unger, a member of the United Methodist Women. “I was really impressed with the number of people that came, getting the conversation going is critical.”

“One of the great things about events like this is that we are all coming together,” McDermott said. “There is a diverse range of perspectives.”

McDermott began the discussion by stating stereotypes of African-Americans are a major obstacle in ending inequality and violence.

“The murders in Charleston this past summer is a clear indicator that we have not transcended our violent past,” she said.

McDermott said the Confederate flag’s removal mirrors progress made in the country since the 1960s, despite a range of inequality still found between the races in the areas of health, education and wealth.

“We cannot just state race doesn’t matter,” she said. “We must commit to goals.”

McDermott spoke of research she had done while working in a discount store in rural South Carolina. She said while working, a white man in the store mentioned a robbery that happened.

Looking around to make sure nobody could hear him but her, he whispered, “He was black, it’s those blacks. They are ruining this country.” However, as soon as a black coworker entered the scene, the man quickly dispersed.

McDermott said this is a demonstration of the unwillingness of differing races to talk about issues together as well as prevailing stereotypes still found in the country.

“Attitudes and stereotypes can change over time,” she said. “We just have a lot more work to do.”

Dixon then spoke primarily about stereotypes and the effect of media.

“The media helps create and reproduce part of our stereotypes,” he said.

He asked the audience to name three prominent African-Americans who are in history books. After three name were announced by the audience, he asked for three Asians and Latinos, but the audience came up dry.

“Our history books tell us who’s important. We learn from institutions,” he said. “Television is supposed to tell us the truth, but it doesn’t,” he said.

http://mediamatters.org/research/2015/03/23/report-new-york-city-television-stations-contin/202553 “Racial bias is systematic and cultural; it’s interwoven in society,” he said. “You should regularly be checking unconscious bias. It’s an active, lifelong process.”

Feinen mentioned the attitude and actions of the community as potential barriers to progress in race relations.

“As a community and society, we need to change and grow,” Feinen said. “If we expect race relations to improve, the city can’t do it by itself.”

Still, Feinen stressed multiple programs in place geared toward the progression of minorities in the community, such as Champaign’s Minority and Women Business Development Program.

“In the last four to five years, our council has worked very hard on opening up contracting and bidding opportunities for minority owned and small businesses,” Feinen said.

She said the non-white population in Champaign is about 20 percent, and nine percent of all city contracts are with minorities. The city council has three African-Americans on its council, one of whom is a woman.

“I see people listening to each other and I see community and police working together in ways I didn’t think possible,” she said.

Cobb spoke about his experiences as both a police officer and an African-American.

“The scrutiny of law enforcement, my profession, is at an all-time high,” Cobb said.

He mentioned the popularity of the Black Lives Matter movement and the nation’s obsession with crime dramas and reality TV.

“The point is, our community is curious about what police officers do, why they do it and how they do it,” Cobb said.

“I was shocked when I got into the profession. I came across a lot of caring men and women who truly want to serve all citizens,” he said. “I did find ignorance when it came to racial differences, but there were good people.”

Cobb said all people have unconscious bias and the problem of bias affects everyone.

“It is my challenge to all of you to know your bias,” he said.

During a question and answer session, one speaker asked the panel how to improve race relations in the community.

McDermott said the community needs to reach out to all of its members, including those uninvolved in the conversation, such as the wealthy and poor.

“The thing about this event is that it is for people who already care about the issue,” she said. “The big question is how do we connect with the people that would never come to an event like this. That’s a really important piece.”

Colin Michels, freshman in ACES, was one of the University students also in attendance at the Sunday seminar.

“I thought it was interesting how media misinterpreted information,” he said. “It’s all about stereotypes and misinterpreting situations.”