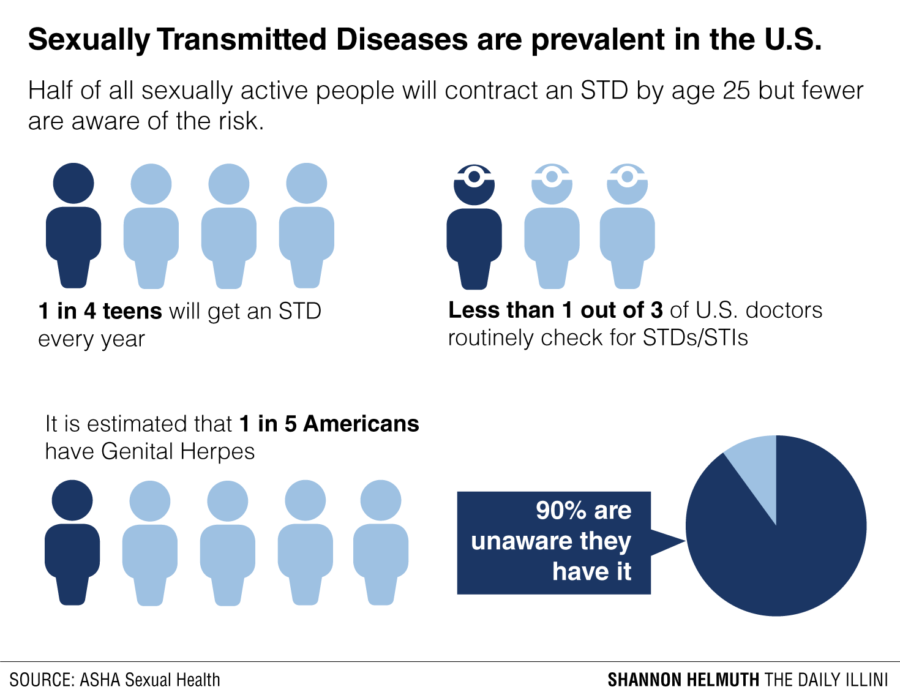 One half of all sexually active people will get a sexually transmitted disease (STD) by age 25, according to the American Sexual Health Association.SO

Pryde feels her district will be able to continue their testing, but she’s uncertain about the future for other counties.

“The difference is just where the cost has been shifted,” she said. “It used to be the cost for the testing was borne by the state of Illinois through the Illinois Department of Public Health. Now, we at the local levels have to do that.”

The Champaign-Urbana Public Health District adapted to the change by redirecting their STD specimens to the University of Illinois Reference Lab in Chicago instead of state labs. The health district had used the lab’s resources in the past, and Pryde said it has been a “relatively easy transition.”

“We’re used to weathering these storms, and we’re able to,” she said. “It’s frustrating, and I get tired of doing it, but we’re prepared for it. What’s frustrating and upsetting is that this kind of budget impasse, it hurts all of the allied services around us; the mental health services, the services to the homeless, things that some of our clients rely on.”

Pryde said she believes the general public will not realize the new changes. The district accepts Medicaid, Medicare and health insurance but they will never turn anyone away for their inability to pay. The effects of the cost will only be noticed on the health district’s bill.

She said the Chicago research lab is more time effective than state labs. With their help, the health district can get their results on chlamydia, HIV, gonorrhea and herpes quicker than before the change.

Additionally, Carle Foundation Hospital will still provide STD testing. Laura Mabry, public relations specialist at Carle, said Carle does all of its own STD testing and does not send any specimens out for testing by the state.

However, Pryde is concerned about other poorer, nearby counties that might struggle without state support. She expects more people to travel from DeWitt, Piatt, Ford and Iroquois counties to the Champaign-Urbana district to receive STD tests.

“I think we’ve seen that over the past years, that because other health departments around us don’t do the testing, undoubtedly we’ll see more people,” she said.

Some students involved in healthcare disagree with the disadvantages this change has put on other county health clinics.

Samantha George, senior in LAS, works for Special Populations in McKinley’s Health Education Department. She said she feels poorer counties will be hindered by this change.

“That’s probably the places that need the funding the most because they’re catering to people who probably don’t have the resources by themselves to get access to that,” George said.