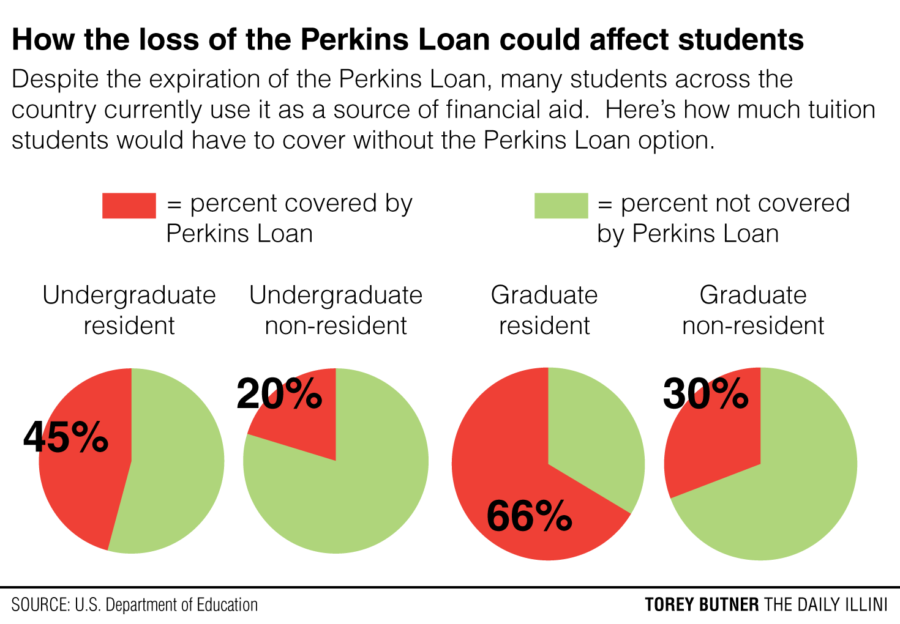 Carla Stelsel, freshman in LAS, took out a Perkins Loan in late May, but future students may not have the same opportunity.

The Federal Perkins Loan Program, a need-based student loan offered by the U.S. Department of Education, expired on Oct. 1 when Congress didn’t renew the program, according to the American Association of Collegiate Registrars and Admissions Officers’ website.SO

Stelsel said she chose the loan option because it seemed like the smartest decision.

“It has a lower interest rate, and it’s designed in a way where it’s forgiving if something goes wrong,” she said. “It’s better than third party loans or unsubsidized loans.”

Stelsel will be able to renew her loan for up to five years, but incoming college students in search of financial aid may now have one less option.

The Perkins Loan is the oldest federal student loan program in the country, according to the American Association of Collegiate Registrars and Admissions Officers’ website.

For the past 57 years, the loan has provided college students with a fixed 5-percent interest rate if the participant is at least a half-time student, according to a Congressional Record from Sept. 29. SO

Students who received the loan were also given a nine-month grace period following graduation, during which they did not have to pay back the loan, according to the U.S. Department of Education.

Once repayment begins, recipients are given ten years to pay back their loans,according to Student Legal Service, a program of the Office of Dean of Students. SO

“So if we have to have debt, it’s one of the best options for paying it back,” Stelsel said.

Mann said there are 762 Perkins Loan recipients at the University who have been awarded a total of $1,562,376 in Federal Perkins Loans for the current school year.

“Most students are not awarded a Federal Perkins Loan and will not be impacted by the elimination of this program,” Mann said.

Still, some protest its elimination.

“I’m somebody that wholeheartedly believes that education is a universal right. If you’re not going to pay for free education, you need to meet students half way,” said Brian Wilens, freshman in Engineering.

“Taking away the program is a direct attack on students, especially people that don’t make ends meet in the first place,” he said.

While universities will no longer be able to authorize new loans through the Perkins Loan program, students who received the loan before June 30 can renew it for up to five years, according to the U.S. Department of Education. SO

Mann said there are continual changes to financial aid programs.