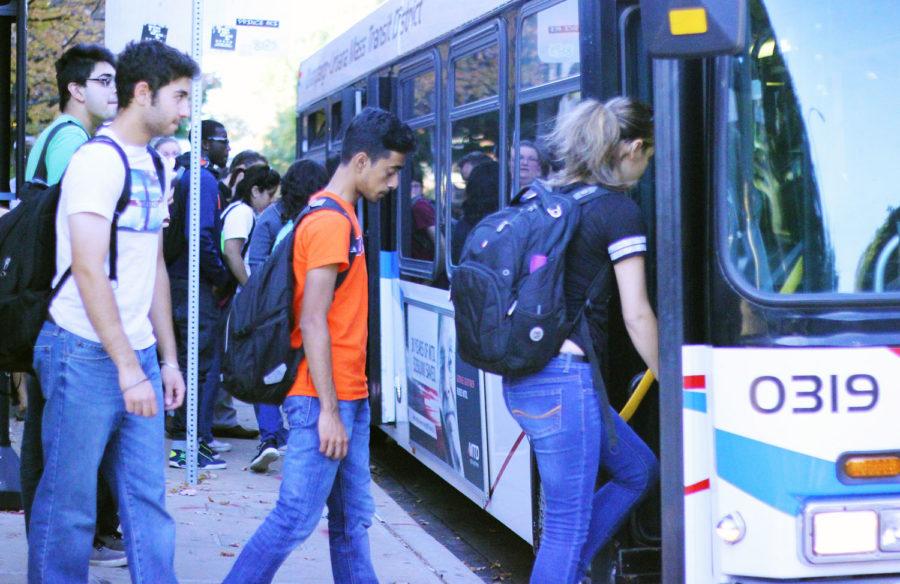 Students getting on a MTD bus at the bus stop in front of Illini Union Bookstore on October 12, 2015.

Any student who has ever missed the 22 Illini before an 8 a.m. class will appreciate the addition of new buses to the Champaign-Urbana Mass Transit District’s fleet.

CUMTD was granted $7.8 million from the Federal Transit Authority, FTA, to purchase up to 42 new buses over the next five years, said Jane Sullivan, grant manager and sustainability planner for CUMTD.

“We receive formula funding from the FTA that is an annual apportionment that is generally used for capital products,” said Karl Gnadt, managing director of CUMTD.

“We are identifying the need to expand our fleet as ridership is increasing and we’d like to increase the spare ratio of buses not in use,” Sullivan said.

CUMTD has 102 buses in its fleet. 43 percent of those buses, however, are over 12 years old — which is a problem as the FTA defines buses over 12 years as aging buses that should be replaced, Sullivan said.

“It’s critical for our residents, our visitors and students without a car to be able to get around our community,” said Jeff Hamilton, communications manager for the city of Champaign. “For a certain number of people who don’t have access, public transportation is very, very important.”

The first order of buses CUMTD will make will be for 12 new 40-foot diesel electric buses. Out of the three sizes of buses used by the CUMTD — 30 feet, 40 feet and 60 feet — the 40-foot buses are the most commonly used. The buses are expected to arrive some time during summer 2016 Sullivan said CUMTD hopes to put the buses in use by fall 2016.

“It might be good to mix the technologies and have the diversity in our fleet,” Sullivan said. “It’s healthier to have a different type of technology in the fleet.”

“In theory, the (BAE) series system gives you more of an opportunity for more fuel savings,” said Gnadt.

It is unclear yet whether or not the addition of these new buses will lead to more bus routes, Sullivan said.

“We will be evaluating if we need new routes, but we will have more opportunity to increase frequency or to add routes,” she said. “Those are separate decisions.”

Hamilton said the new buses will have several benefits, including helping to keep bus fares low and providing reliable service for the Champaign-Urbana community. Having new buses decreases maintenance and operating costs, meaning they can keep their fares low. The new buses will also be more environmentally friendly.

“They will have less carbon emissions, which means less exhaust fumes in the community,” Hamilton said. “These are all part of sustainability efforts that the City Council is very supportive of, and the fact that CUMTD is making that investment in sustainability is also good for the community.”