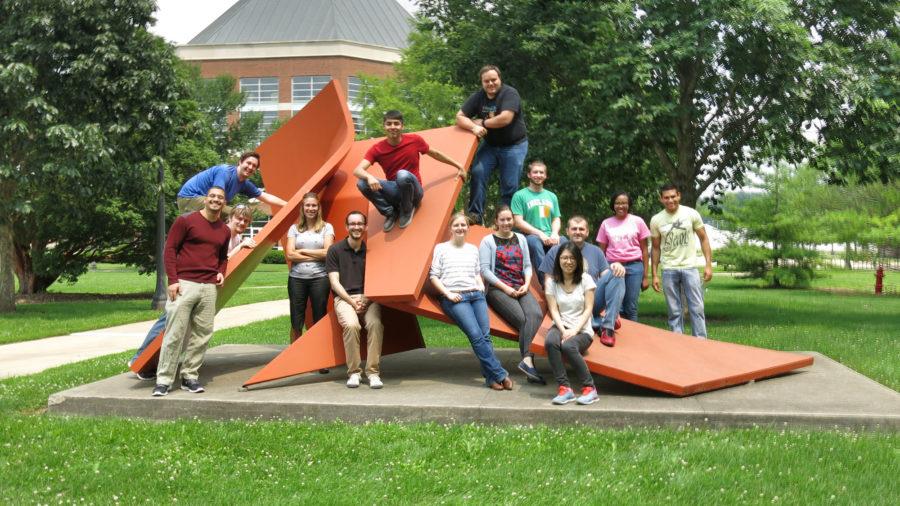 The Fout Group is a chemical research group committed to molecule work. Faut (fourth from left) and her group will now be working on an investigation on nitrite reduction, a process that can reduce blood pressure.

Fout received a Marion Milligan Mason Award for Women in Chemical Sciences, a research grant given to female scientists who are just starting their careers. On Thursday, Fout and the three other winners were recognized at an awards ceremony in Washington D.C. hosted by the American Association for the Advancement in Science.

Fout will use the grant for her project, “Nitrite Reduction in a Non-Heme System: Evidence for an Alternative Mechanism,” which will research nitrite reduction in humans and its effects on blood pressure.

She will be conducting the research with her own program, The Fout Group — founded in 2013, one year after Fout joined the University faculty. The group focuses on molecule research and is comprised of three undergraduate students and nine graduate students.

The work the Fout Group does — and will do with the new project — is “similar to that of an architect,” Fout said.

“Before an architect breaks ground on a new building he/she builds a model of that building. This model will contain all the fine details of the building, from the placement of windows and doors to the park benches that people will sit on to enjoy a sunny day,” she said. “This is very similar to how we build our molecules, a smaller model of a larger system that still contains the intricacies found in the larger molecule.”

“As an early-career scientist, this is very difficult at times, to get the funding for high-risk research,” Fout said at the ceremony. “We need preliminary results, we need data, we need publications, and then we need to get that funding. And as you can imagine, all that takes time, and time costs money.” http://www.aaas.org/news/first-aaas-marion-milligan-mason-awards-go-four-outstanding-women-chemical-sciences

Fout was selected out of 190 applicants from 123 schools and progressed through two stages. First, the initial applicant pool was narrowed down to the top 20 to 25 finalists. In the second stage, a jury of four members of the chemical sciences community decided the final award recipients, said Gavin Stern, AAAS director of news and information.

The grant was not the first award Fout has received in her career.

In 2014, she was awarded with the National Science Foundation Faculty Early Career Development Award, and in 2010 she was given the American Chemical Society Division of Inorganic Chemistry Young Investigators Award. http://www.chemistry.illinois.edu/faculty/Alison_Fout.html

Simran Rijhwani, a freshman in animal sciences, said she appreciates the value jumpstart grants could have to a student early in their career.

“The earlier students have an opportunity to apply what their learning into research, the better,” Rijhwani said.

Fout said the grant opened the door for her. in terms of further funding for future projects. As a result of the award, she said being able to collect data from this project will allow her to apply for funding from other agencies.

“This truly facilitates an early career scientist and research group in obtaining research results fast,” she said. “Another aspect of this award, which is unique, is the leadership development component. With this my research group and myself will become better future scientific leaders.”