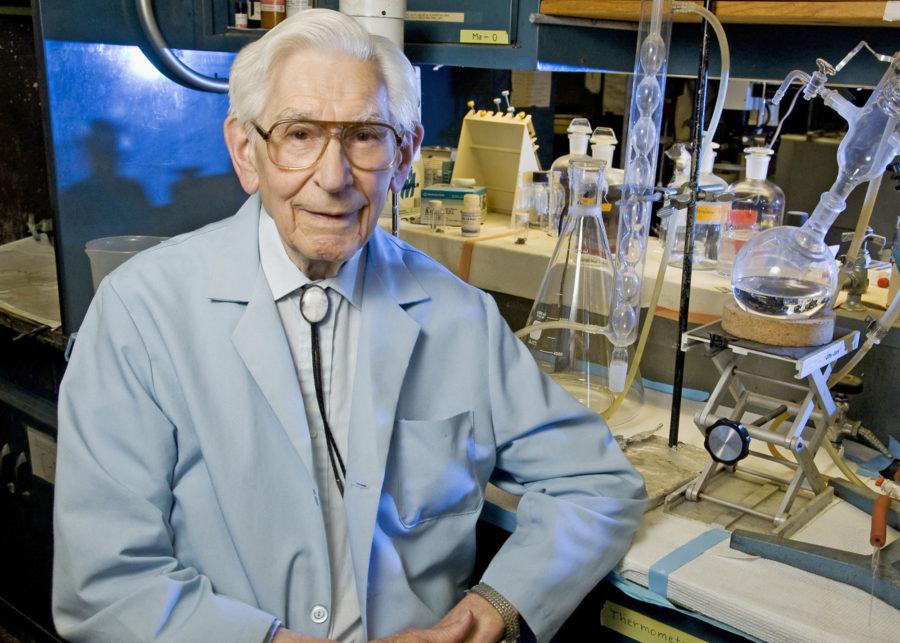 The work of University professor Fred Kummerow is set to be archived by the Main Library.

Forty-four million people worldwide have Alzheimer’s disease. According to Alzhemiers.net, the disease costs just over $600 billion to care for these patients each year.

Scientists believe the disease is caused by certain environmental or genetic factors. The exact causes, however, have not been pinpointed.

But at 101 years old, one scientist is trying to change that.

Dr. Fred Kummerow, a professor emeritus at the University, became acquainted with science as a 12 year old, when he received a chemistry set from a friend. But his interest didn’t start until a little later.

“When I got to high school, I took a three year chemistry course,” he explained.

After receiving his Bachelor and Master’s degrees from the University of Wisconsin-Madison, he began his first research project, which drastically changed the food industry.

“I had a next door neighbor who was a doctor at Carle Hospital,” Kummerow said. “He got me samples of autopsies of people who had died of heart disease. I gave these samples to my two students, and they analyzed them for fatty acid content, and he found trans fats. I published that paper in science magazine, and that got things started.”

He found that people who ate trans fats had an increased risk of developing blood clots.

After making this discovery, he wrote to the FDA about removing trans fats out of foods. After three long years of not hearing a reply, his docket was finally accepted in 2013.

Kummerow is primarily known for his research on trans fatshttps://www.dailyillini.com/article/2013/12/the-man-behind-the-trans-fat-ban, but now, he is trying to tackle Alzheimer’s disease.

When his sister-in-law passed away from Alzheimer’s, he decided to use his knowledge in the chemistry field to start research on the disease. But he’s encountering one major block.

Kummerow cannot begin his research until he receives money to fund it, explained his assistant and caretaker Lou Ann Carper, a CNA that helps him with small tasks like typing and researching on the internet.

“We actually just sent the papers in for it, and we won’t know until next spring at the earliest whether we have it or not, so he’s still trying to find funding other places because we don’t know for sure if this grant will come through,” Carper said.

Kummerow believes prescription drugs are not the solution and thinks the causes are related to an individual’s diet.

As Carper explained, he would use the grant money to prove that belief.

“He’s going to show that the diet is a cause of Alzheimer’s disease. It’s mostly based on the fats being consumed,” Carper said.

Jean Kummerow, one of Kummerow’s daughters who also helps her father with small research tasks, also believes this link may be true.

“We do know the brain is made up of fat. His hypothesis very may well be right, and he needs to check it out,” Jean Kummerow said. “So I’m all for him doing it. He’s got good ideas about things, and it would be nice to get them checked out.”

Fred Kummerow is very hopeful that his research will be successful. Although he doesn’t expect to find a definitive cure, he does expect to pinpoint links that cause the disease.

“I’m going to find a link to find what causes it and how to prevent it,” Fred Kummerow said.

Carper believes he has a good chance.

“I really think that he is onto something here and can make it happen if we can get this grant to do the research,” Carper said.

Aside from being his assistant and caretaker, Carper also volunteers at Amber Glenn, an Alzheimer’s facility in Urbana, where she takes care of a 93-year-old resident with Alzheimer’s. Therefore, her personal connection to the disease makes her involvement in Fred Kummerow’s research much more unique.

On her visits to the facility, Carper said, “You just see how it affects everyone, and you just see the decline each time you go in. I think this is important research.”

Despite surpassing the 100-year-old mark, Fred Kummerow does not see his age as an obstacle. He follows what he believes is healthy based on his research, which of course includes taking all trans fats out of his diet.

Jean Kummerow sees his success, as a healthy individual and as a renown professor, as a result from the perseverance he possesses.

“He just keeps going and going. He also really is an optimist. He may have a setback, but it doesn’t stop him for very long,” she said. “He figures out another way to get things done. He’s just remarkable in how he gets stuff done.”