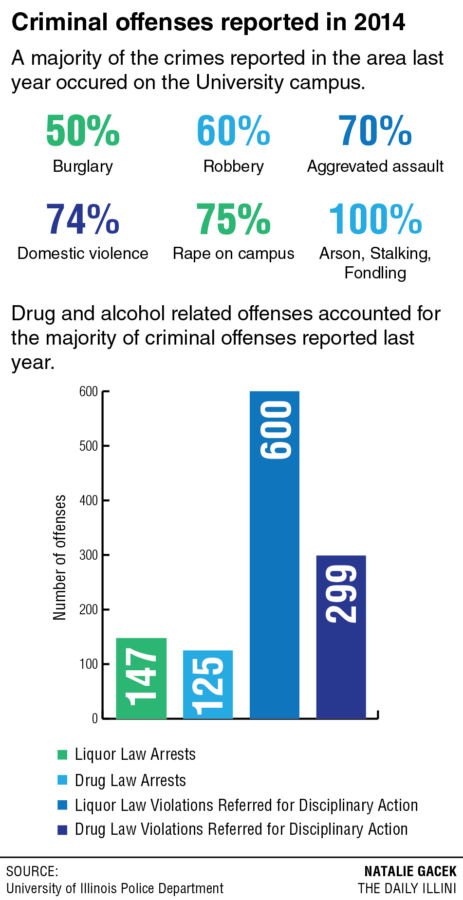 The Division of Public Safety along with Campus Code Compliance and Fire Safety recently released the Annual Security and Fire Safety Report. Reviewing campus-wide rules and regulations, the report also detailed statistics about safety and fire incidents that have occurred on campus over the past three years.

The 2015 report was the first year in which the Security and Fire safety report combined into one holistic record, according to Police Captain of the University of Illinois Police Department Tony Brown.

Aside from a reduction in violent crimes, the report depicts what the Division of Public Safety expected.

“The trend has stayed pretty consistent for the last several years,” Brown said. “They’re pretty much in the range of what we see in the past.”

The report found overall aggravated assault was down from 2012 and 2013, but the number of reported cases on campus increased. In 2012 on campus, there were six reported cases, 10 in 2013 and 14 in 2014. http://publicsafety.illinois.edu/universitypolice/CurrentASR.pdf

A major project for division has been the expansion of safety cameras.

By the end of 2014, 1,028 cameras were in place across Champaign. Along with Technology Services, the division completed a proposal to install camera coverage into the greater campustown area, specifically along the Green Street corridor and Sixth Street between Daniel Street and Green Street. http://publicsafety.illinois.edu/universitypolice/CurrentASR.pdf

“This has been at least a five- year project now of adding security cameras to the campus. We feel it makes the campus safer,” Brown said.

He noted that with access to video evidence of a suspect, the division is able to solve a crime an estimated 60 percent of the time.

As mandated by the Violence Against Women Reauthorization Act of 2013, the annual report now includes definitions of terms domestic violence, dating violence and stalking.

“Last year we added the information and crime statistics about those, but we had to make a good faith effort because (in) the final regulations, the definitions weren’t available yet,” Brown said. “There has been significant effort to raise awareness and prevent sexual misconduct crimes from occurring on campus.”

For Brown, the report provides critical insight for not only division but also the general community.

“The annual report allows people again to get that information and make decisions in their best interest, so that they’re not a victim of crime,” Brown said.