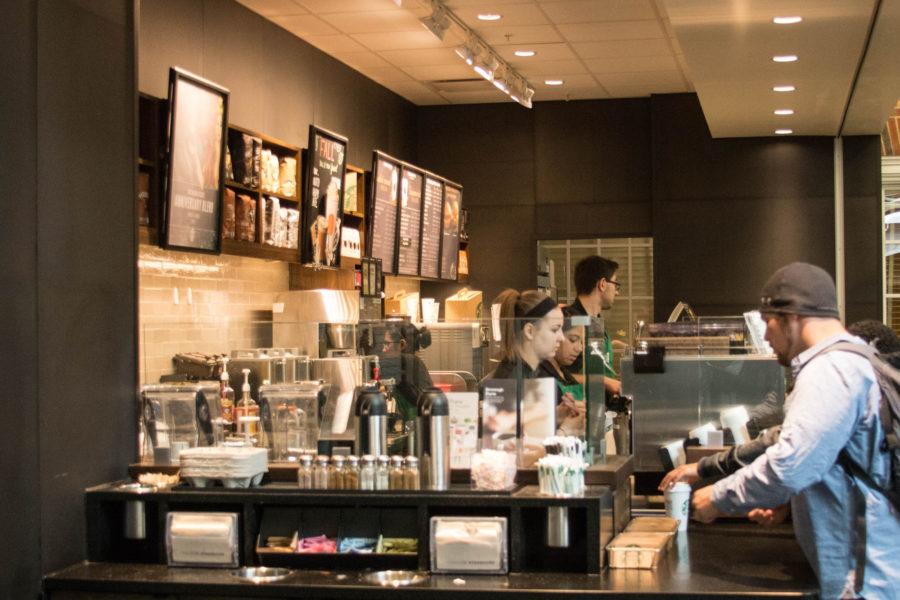 Starbucks at the Courtyard Cafe in the Union.

The complaints, which have also been filed to the coffee shop itself, state the noise made by the baristas and machines interferes with people’s enjoyment of courtyard performances.

Gregory Fabry, junior in Engineering said he was distracted when he saw “The Ginger and Spice Show,” a performance put on by a pair of harpists from the College of Music.

“During a silent moment in the performance a barista yelled out, ‘banana nut!’ which led the crowd to snicker and the performer to respond jokingly,” Fabry said.

He said that he doesn’t recall any similar incidents occurring before Starbucks opened its new location.

“I went to a couple performances when it was Espresso Royale and I don’t remember any interruptions,” Fabry said. “If they were noisy, it was never at one of the shows I went to.”

The two stops have a similar function, as both provide coffee and other snacks and pastries. Architecturally, however, there are differences in the layout of the coffee shops.

Espresso Royale’s store was built into the wall in the southeast corner of the cafe — sharing the same side of the room as the stage — where RSOs and other artists can host events such as a guest performer or open mic nights.

Starbucks is located on the wall opposite the stage and is built out of the wall, intended to provide “a more open concept,” said Rebecca Seymour, overseer of all Starbucks operations on campus.

“In order to allow ample space for the students to congregate as well as enjoy courtyard performances , the Illini Union recently leveled the elevated section of the east side of the courtyard, moving the café out into the courtyard as well,” Seymour said.

Additionally, the differing acoustic set-ups of the shops could have an effect on noise volume, said Douglas McCarver, regional operations manager of Espresso Royale in Illinois.

“My guess is that because Espresso was located in a much smaller, enclosed space near the side entrance — it is now the Starbucks storage closet — the sounds were more muffled and not as intrusive,” McCarver said. “Since the Starbucks is now a third of the courtyard cafe with a very open air design, I would imagine the sounds would travel and be much louder; it is essentially in the performance space.”

“On occasion there are complaints that are brought up after the event,” Andruczyk said. “But there seems to be no difference in complaints now from when Espresso Royale was in that space previous to Starbucks being there now.

“(They) meet with the Courtyard programming manager to anticipate upcoming performance venues. Starbucks typically turns off their music during performances and tries to staff accordingly to best serve attendance needs,” Seymour said.

McCarver said the chaos and noise of any coffee shop is just part of the business.

“(The) Espresso Royale in the Illini Union was always open and served all of the drinks during performances,” he said. “Cafes are loud, with the grinders, the tapping, the banging, and the steaming.”

When artists perform, they are told the cafe is an open and public space, and there are possibilities for sound to bleed over, Andruczyk said.

The layout, despite recent complaints, is still being utilized by RSOs and performers. According to the Illini Union calendar, there are 14 events scheduled in the Courtyard Cafe in October. ( http://union.illinois.edu/see-and-do/events/calendar )

“A big goal would be to have an event in the Courtyard Café every available day, no matter how big or small,” Andruczyk said. “It really is a great space in a central location that groups can utilize.”

However, some performance attendees are still bothered by the noise.

“It’s just not appropriate for the vibe of some of the shows there, in my opinion,” Fabry said. fm