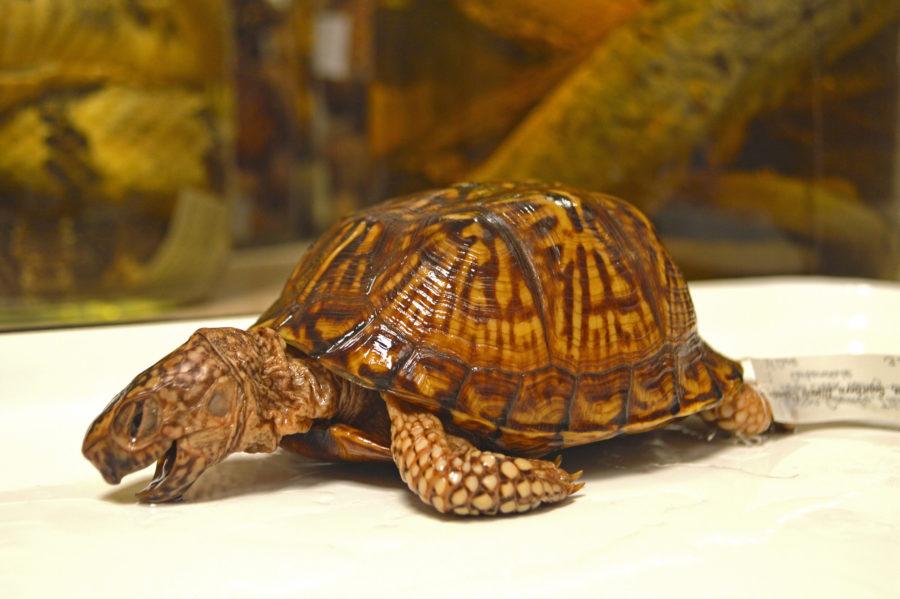 This species of turtle is the Terrapene carolina, otherwise known as the common box turtle. This specimen was collected in Jackson County, Illinois over 75 years ago and is part of a collection from Southern Illinois University Carbondale.

The Illinois Natural History Survey has described itself as the guardian and recorder of biological specimens of Illinois since 1858. And recently the collection got even bigger.

Although the specimens were donated, they did not come without a cost. The survey received a $141,889 Rapid Response Research grant from the National Science Foundation to bring the specimens to Champaign.

The grant started on May 15, covering the cost of transportation and the man hours it took to pack and label the collections. Without the grant, Phillips said the survey wouldn’t have been able to get the specimens.

According to the grant’s abstract, if the specimens weren’t transported to the University, SIUC would pack and move the specimens off-campus without a trained staff to maintain the collections. The collections would have been “stored indefinitely at that off-campus location and not curated or monitored.”

If SIUC had boxed and stored the collections, it’s unclear what could have happened to the specimens. Phillips said it depended on how long the storage was going to be for and the conditions involved. He said wet collections need to have their fluid levels checked on a regular basis, which wouldn’t have been possible had the collections been stored.

So, why are natural history collections important?

To understand the world, there needs to be collections for people to perform continuous studies of natural history specimens, according to The Society for the Preservation of Natural History Collections.

The survey has more than 9.5 million specimens, according to its website. The collections work as a resource for documenting changes “in species distributions,” and the survey’s collections are “the most complete record of Illinois biota anywhere.” Specimens include fish, fungi, insects, fossils, mammals, birds, crustaceans, mollusks, amphibians and reptiles, annelids and plants.

The documented information is used to recognize threatened and endangered species, see effects of climate change, unearth new species, learn information of invasive species and learn about the quality of habitats over time.

“Research collections, like Southern Illinois University’s fluid vertebrates collection, are crucial storehouses of biological information,”said Reed Beaman, program manager for the survey’s grant at the National Science Foundation, in an email. “Transferring this collection to the Illinois Natural History Survey will ensure the specimens are protected and preserved, allowing researchers continued use of the collection to make discoveries about our world.”

“This is happening nationwide. Collections are being lost all the time,” said Brian Anderson, senior deputy executive director of the Prairie Research Institute.

He said many colleges and universities have been divesting themselves of collections in recent years.

He said some organizations choose to get rid of collections because of the cost to maintenance and the limited space for storage. But Anderson said specimens are still very important. If researchers don’t support their reports with actual specimens, the reports can be challenged legally.

Anderson said although the survey has an obligation to salvage collections, it has to be conservative of the collections it takes in with space and money in consideration.

He believes in the importance of the collections, and compared destroying collections to burning books, or pieces of history.

“If you lose them, they can’t be replaced,” Anderson said.

Phillips said there’s a trend of studying organismal biology less and turning toward the study of cellular and molecular biology. He said there’s the idea that humans already know everything worth learning about whole organisms.

“Which of course is not true,” Phillips said. “We hardly know anything about invertebrate biodiversity on this planet.”

Phillips said the survey has a grant pending with the National Science Foundation to fund the integration of the collections into the survey, which includes unpacking, putting them onto shelves, re-cataloging them and making labels. The pending grant would also include money to hire an IT employee for a year to handle the transfer of data from the current database to a more powerful database.

Phillips said the survey can’t afford to integrate the collections without help. He believes the survey has a good chance of getting the second grant, as the foundation funded the transportation of the collection and doesn’t want the specimens to sit in boxes.

SIUC could not be reached for press time.