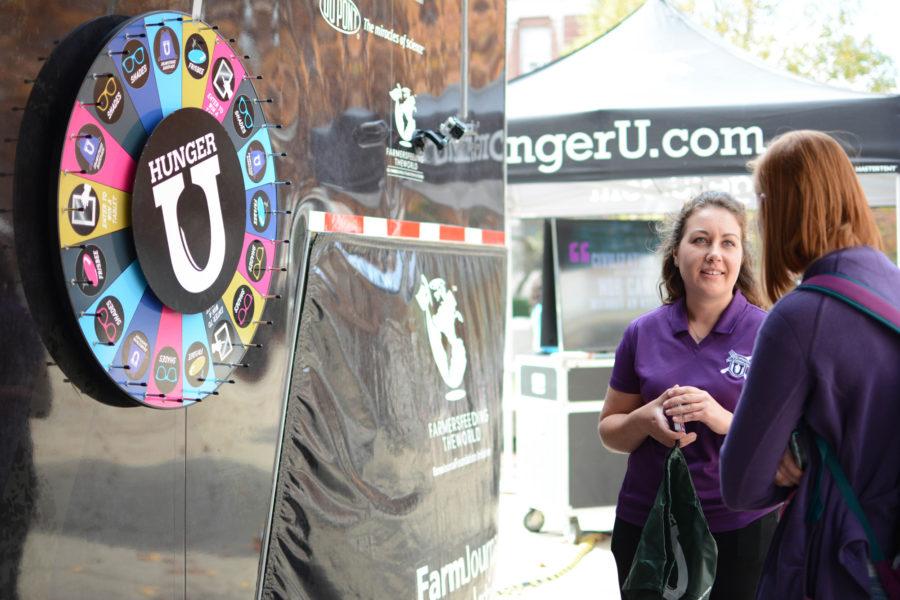 Madeline Skellie, a HungerU crew member tells students what the organization's goals are and how students can help on the quad on Nov. 4, 2015.

A banner reading “let’s give hunger an expiration date” greeted students outside of the Illini Union Wednesday, encouraging passers by to visit the mobile HungerU RV that was parked on Anniversary Plaza for the day.ch

The University was the last of eight stops on HungerU’s semester-long campaign to educate students about hunger and global food security.

“Our goal is to get students more aware of these issues, to talk about them — with the role that modern agriculture plays in solving them — and to get them more engaged, whether in their community, or with their major,” said Fiona Coleman, a HungerU crew member.

The HungerU RV housed three digital screens that displayed statistics on global food security and a prize wheel, which gave students who took a short quiz about international food security a chance to win frisbees and backpacks. For every quiz taken, HungerU donated funds to local campus kitchens to help provide meals.

“Illinois is on our list, being that it has a big agriculture program and also that it’s a really big, bustling, active campus,” Coleman said. “We know that we can engage a lot of students here.”

She said there are several ways students can get involved in ending food security, on and off campus. HungerU’s goal is to start a campus conversation about food security and to urge students to think about how problems surrounding global food security problems can be solved.

The Farm Journal Foundation educates legislators about the Global Food Security Act and ways to ensure that money is spent improving agriculture infrastructure in other countries, rather than only supplying food, she said.

Coleman said it’s likely HungerU will visit the University again within the next couple of years.

“We’ve had such an amazing outcome here on this campus, it’s been our busiest campus yet,” Coleman said. “A lot of students really want to know what they can do.”