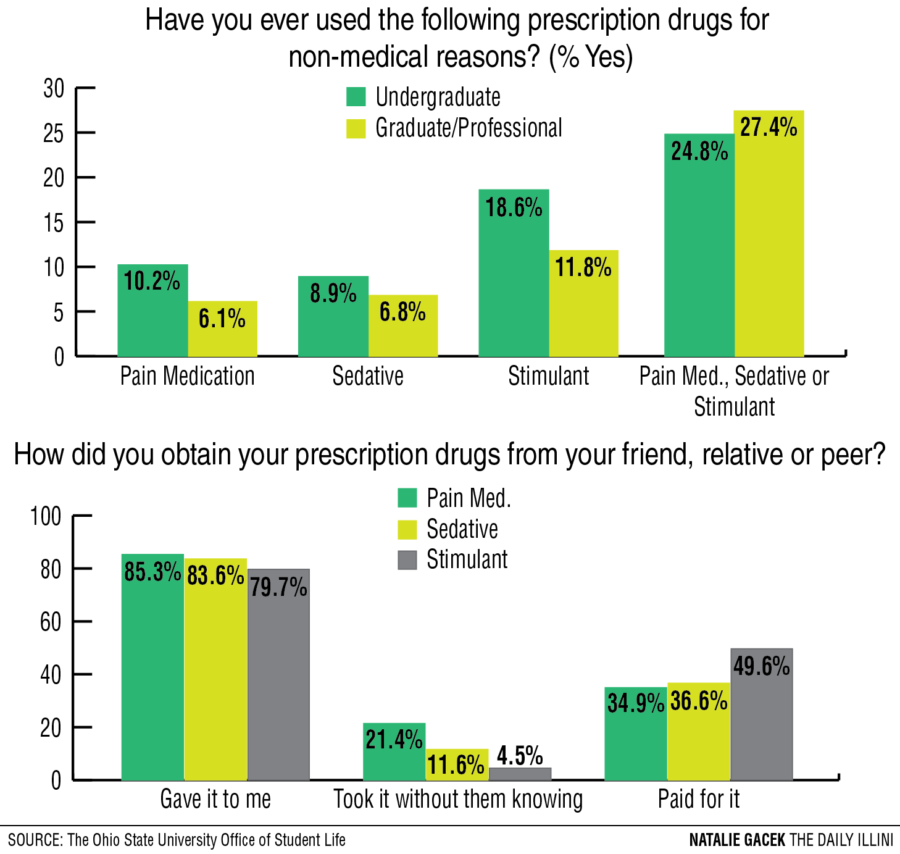 One in four undergraduate students reportedly misuse prescription drugs, according to a study by Ohio State University.

The study, conducted by a center at Ohio State University (http://hecaod.osu.edu/), notes prescription drug abuse is rampant on college campuses. 18.6 percent of students reported using stimulants, primarily to boost their grades. About half of students who reported using non-prescription pain medication said that they used the drugs to get high.

University of Illinois Police Department Sgt. Joe McCullough said that most University students charged with misuse or abuse of prescription drugs are misinformed about the seriousness of the offense.

About 53 percent of undergraduate students reported using illegal drugs like marijuana, cocaine or hallucinogens in place of their non-medical use of prescription drugs.

Students across the board overstated the percentage of students who use non-prescription drugs, estimating that a third of students used stimulants.

Two similar studies on prescription drug misuse were conducted at Ohio State in 2008 and 2001. According to Anne McDaniel, associate director of research and data management at The Ohio State University’s Center for the Study of Student Life and author of the study, trends are consistent across the various studies.

“We did see a lot of the same findings when we looked at other institutions. Ohio State wasn’t an outlier in anyway,” McDaniel said.

The 2015 study included eight different universities by way of an anonymous online survey. Undergraduate, graduate and professional students were all extensively surveyed as part of the study.

“This is the type of issue we have some basic descriptive data on, but this is the first study that’s really more comprehensive and looking at more in-depth reasons on why they misuse prescription drugs,” she said.

McDaniel said the study has a twofold purpose: to inform and to educate universities.

“We will do research and hopefully publish a manuscript off of the study,” she said. “But the primary purpose is for institutions to have data about their students so they can appropriately tailor educational efforts.”

“We generally use it for an educational opportunity — from a policy standpoint, because the university is going to deal with it pretty strictly,” he said. “However when we find somebody who is selling it, we will make a criminal arrest on that. They know what they’re doing. They’re trying to put drugs on the street.”