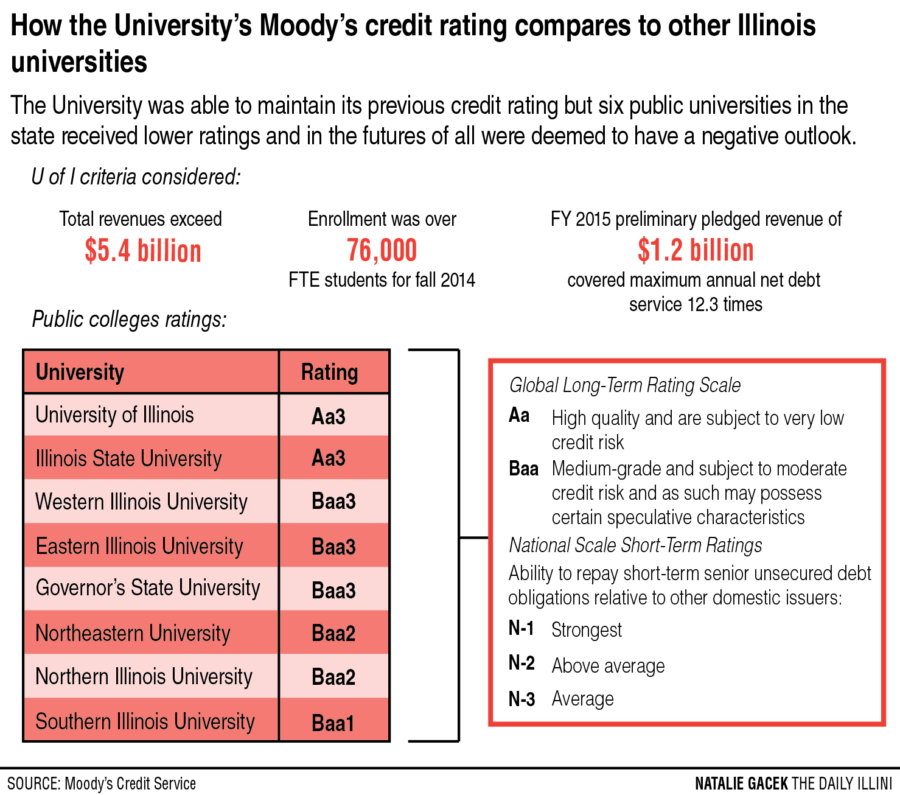 Moody’s Investor Service rates organizations such as countries, states and universities on a scale from Aaa to C. Baa3 is the lowest prime rating an organization can receive.

The University and ISU avoided credit downgrades but Moody’s still reported that the outlook is negative. According to Moody’s, the relatively high amount of available or liquid assets the University has access to was one of the reasons its Aa3 credit rating was maintained.

However, the lack of a state budget caused Moody’s to rate the University’s future outlook as negative.

Dr. Dorothee Schneider, a lecturer in history and communications chair for the Non-Tenured Faculty Coalition, pointed to the University’s ample endowments, “fantastic research” and rising applicant rate as reasons Moody’s did not downgrade the school’s ratings.

“The University has squirreled away enough money to keep its operations running for one year without help from the state,” Schneider said. “The U of I has a rising number of applicants ready to pay full tuition. For example, the number of international students has doubled in the last ten years.”

Schneider also said the University only derives 15 percent of its operating budget from the state, compared to Eastern Illinois University’s 45 percent.

Schneider said the effects of the state budget standoff can already be seen in the freezing of across-the-board pay raises.

Dana Rabin, associate professor of history, said she is concerned with the state of the University’s fiscal outlook and its effect on employees.

“It’s got me very worried,” said Rabin. “There’s a great deal of uncertainty at the moment.”

Students have also expressed concern about the state of the University’s finances. Kevin Riordan, a sophomore in LAS, said he is surprised that the topic has not been made a bigger issue among students on campus.

Riordan said he hopes the budget issues can be resolved, ideally without increased privatization of the University or an increase in tution.

Wyatt Beaty, a junior in LAS, said he looks forward to seeing the budget issues resolved quickly. He said he worries that the scholarships that allow him to attend the University will not be available to students in the future.

Despite the credit rating remaining constant, Moody’s said the outlook for the University is negative because of “the potential of continued reduced or delayed state funding.”

The futures of all six universities have “negative outlooks,” according to a report by Moody’s.

The drops in ratings for these universities have varying causes, but the most common and prominent reason is the lack of a state budget and projected cuts to state spending on Illinois universities.

According to a report about Northeastern University, Moody’s research service said that, “Given expected state funding cuts and the lack of appropriations thus far through fiscal 2016, the university’s reliance on the state will place a strain on operations and liquidity”.