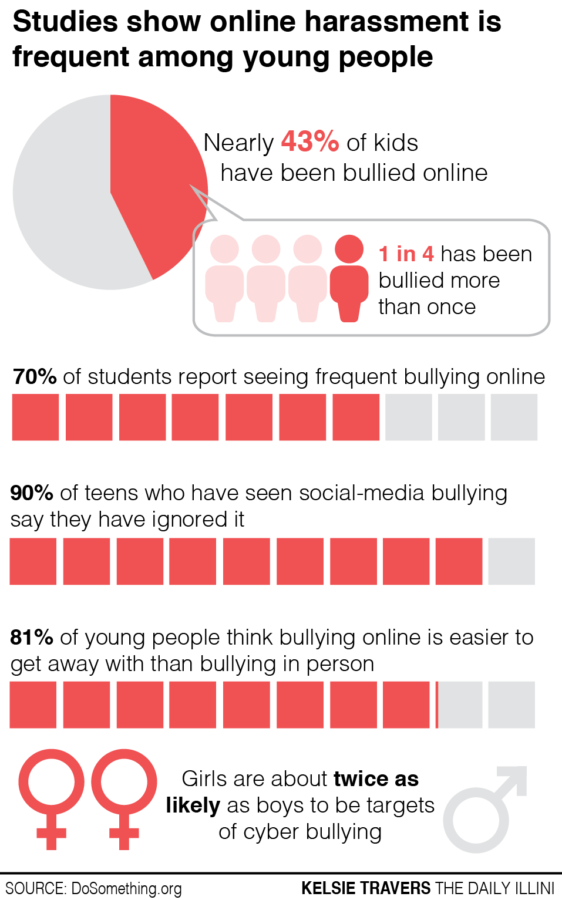 On Oct. 21, 72 women’s and civil rights organizations gathered in Washington D.C. to advocate for the U.S. Department of Education to insist that colleges monitor anonymous social media for racist and sexual comments to protect students who are identifiable.

However, the University is not monitoring or banning the app to prevent offensive comments.

“Hate always finds a way to be heard,” he said. “Our goal should be to undermine the ideology itself, not its voice.”

Rachel Storm, Assistant Director at the Women’s Resource CenterJT, said social media can be used for social justice as much as it can be used to exploit or harass others.

“Social media has been a tremendous space for calling out racism, sexism, trans-phobia and other systems of oppression,” she said. “If you see something oppressive online, speak up and if someone is harassing you or someone you know, reach out for help.”

In an effort to protect students against harmful posts Yik Yak has “geofenced” middle and high school campuses so students cannot open the app. The app is intended for people 18 and older.

In April, over 500 students protested against racist comments on Yik Yak at Colby College in MaineJT. In May, female students at University of Mary Washington in Virginia complained to the U.S. government about the failure of their school to protect them after they reported assault and death threats made on Yik Yak.

Storm said there are a number of resources at the University aimed to protect students facing threats.

“If a student is experiencing harassment on social media, they definitely can reach out to the Women’s Resources Center, as well as the other cultural centers on campus, for supportive services,” said Molly McLay, assistant director at the Women’s Resource CenterJT.

Brown encourages victims of prejudice-based harassment to contact the police and the Office for Student Conflict Resolution. The Office of Diversity, Equity and Access also recommends that victims of gender-based or sexual harassment contact their office or use the We Care website.

Speaking out and alerting others to instances of discrimination is also a feature adopted by the app itself. When encountering an offensive Yak, users can tap the post and hit the flag on the top right-hand corner of the screen. Brown said preventing abusive behavior on social media requires a “holistic societal effort.”

Correction: A previous version of this article incorrectly stated Yik Yak is banned on middle school and high school campuses. The article should have stated Yik Yak does not allow the app to be opened on campuses where students may be 18 years-old or younger. The Daily Illini regrets the error.