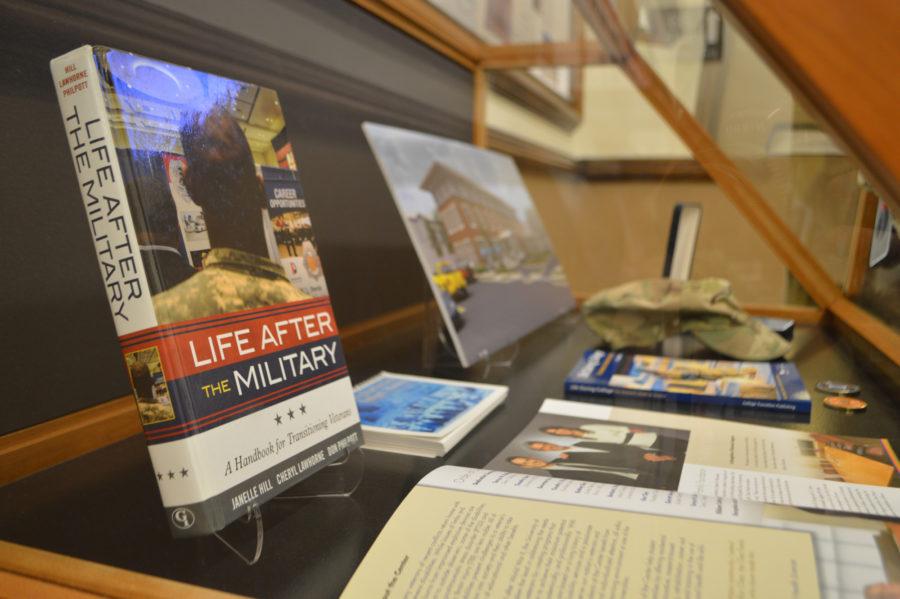 In honor of Veterans’ Day, a display called “A Continuum of Pioneering Service: A History of Military Support at the University of Illinois” was shown at the Main Library on Nov. 10, 2015.

For many students, Veterans Day is a time to salute veterans and show appreciation for all they have done for the U.S. However, for veterans themselves, the day takes on a different meaning.

Patricia Starks, National Guard veteran and president of Illini Veterans, said she has seen “a sense of pride and honor” in her colleagues over the past week.

“You get a huge sense of American pride among a lot of the veterans around this time,” she said. “We’re not patting ourselves on the back, we’re honoring those people who have made great sacrifices before us, in previous generations.”

Veterans Day — annually recognized on Nov. 11 — is a day where Americans recognize veterans for their life-long service to the nation. However, Starks said she doesn’t think it should be a day for handouts or special charity work. Starks said veterans are human and appreciate when people thank them for their service.

There are various events going on around campus this month in honor of veterans, where students can show their respect.

During the Nov. 14 football game, Starks said veterans will walk out onto the field, and an AC-130 will fly over, piloted by University alumni veterans from the 182nd AirLift Wing.

The Native American House will host a ceremony at 8 a.m. Wednesday to honor veterans.

“It’s mostly an opportunity for us to honor veterans,” said Hattie Holtapp, office support specialist at the Native American House. “Within American Indian culture, generally, veterans have a very special place. So this is our effort to recognize that.”

Holtapp said the event is not specifically for Native American veterans.

Nicholas Osborne, interim director of the Center for Wounded Veterans in Higher Education, said the main library will showcase a display that illustrates the rich history of military connection to the University.

“It specifically looks at our relationship with creating disability services for World War II veterans, all the way through the development of the (Center for Wounded Veterans),” Osborne said.

Osborne said he thinks it’s more accurate to call students who have served, ‘military connected students,’ rather than veterans.

“What that can mean is those who served in the military and essentially did their time and got out and are now full time civilians,” he said. “But it could also mean someone who is in the reserves or national guard or (is) going to school here and still on active duty, or even a dependent like a spouse or child of a service member.”

Obsborne said the ideas behind Veterans Day — honoring and thanking service members — last for more than just one day.

“It is something that has a lot of events taking place both on campus and within the community,” he said. “I think that that shows both the campus community and larger community have a very deep sense of appreciation and support for service members.”

“I think it’s important that we have a recognition and appreciation for how diverse our campus is and that veterans contribute to that diversity,” he said. “To see the communities support on campus shows that we have a very dedicated commitment to serving a diverse population of students … I think that’s a beautiful thing.”