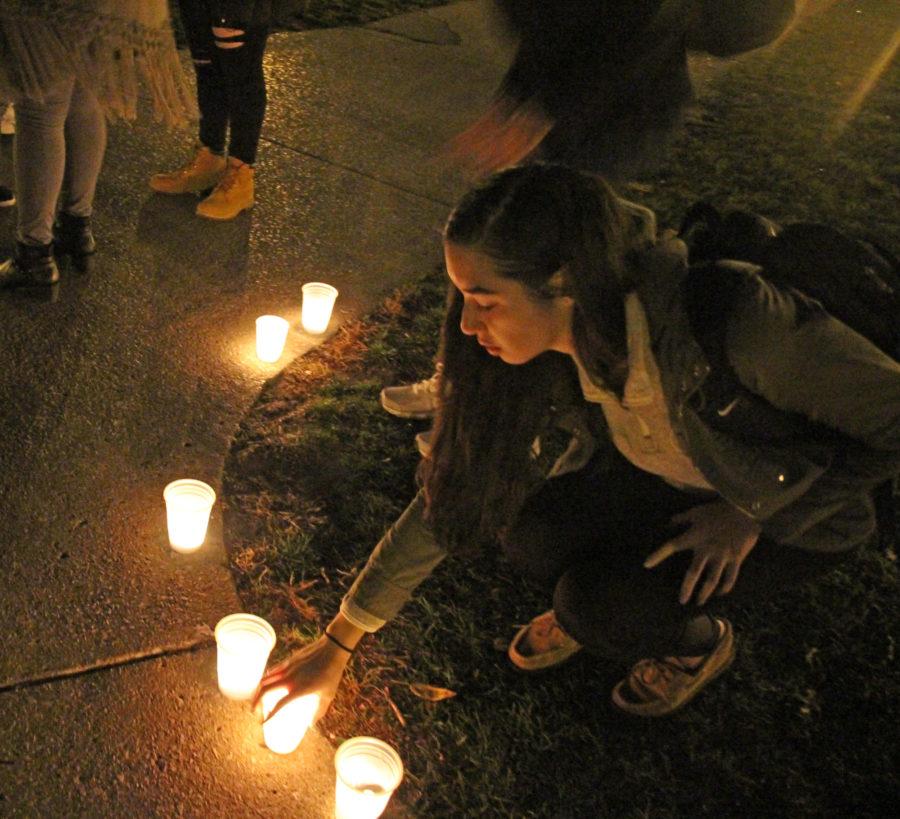 Students light candles during a vigil in support of those affected by the recent tragedies in Paris.

Saturday evening, around 40 students huddled on the steps of the Union in near silence as everyone waited for the arrival of clear, plastic cups that could shield their candles from the windy night.

Once the stack arrived, people began quietly conversing as lighters were shared.

Even with the make-shift protection, the candles would often burnout, prompting strangers to help one another keep the flames lit.

Once all the candles were lit, the students gathered in the center of the the Quad to show support for France, following the terrorist attacks in Paris on Friday that left 129 dead and 352 wounded.JT(http://www.nytimes.com/2015/11/15/world/europe/paris-terrorist-attacks.html?_r=0)

“It just shows how fear and danger can’t cancel out the human spirit,” said Amrutha Prasad, senior in LASJT. “We will rally together always.”

Among the solemn crowd was Vincent Cailliot, a French exchange studentJT.

“When it happened, I was shocked,” he said. “I was watching the news every second.”

Cailliot said he attends school in Paris and has friends that were in the area when the attacks occurred.

“It doesn’t touch you the same way when it’s not your country,” he said. “Because I’m French, I’m devastated.”

The attacks began at 9:20 p.m. on Friday when a bomb went off at the Stade de France, the country’s national soccer stadium. The attacks continued throughout the night in various locations throughout the city including several restaurants and the Bataclan concert hall.(http://www.nbcnews.com/storyline/paris-terror-attacks/timeline-terror-how-horror-unfolded-paris-n463561)JTInternational authorities are investigating the attackers and have launched a manhunt to find suspects in Belgium.

French president Francois Hollande blamed the Islamic group ISIS for organizing the attack, the BBC reported.(http://www.bbc.com/news/world-europe-34820016)JTAfter the attacks, a number of countries paid respect to their ally by lighting famous monuments with the French colors.

Cailliot said it was nice to have support and see the world mourn the dead.

Students who had never been to France also came to support the cause on the Quad.

“I came out here tonight because I just feel so sad,” said Adibah Hamzah, senior in LAS. “I want to show support for the French, even if they can’t see us.”

Even with the candles sheltered by the clear plastic cups and light-sharers, the wind still managed to diminish their flames, leaving the vigil in darkness again.

“They want us to be afraid and divided, but we have to show that we are strong,” said Cailliot. “Things will change in France, and I’m not sure if it’ll be for the good or for the bad – but I hope for the good.”

The University Study Abroad Office posted on its Facebook page on Friday, announcing that all University students studying abroad in Paris were reported safe.

The office posted a blog post on Saturday directing students, faculty and staff with plans to travel to or from Paris to contact Andrea Bordeau, the assistant director of international safety and security. (https://illinois.edu/blog/view/6208/278581)JT