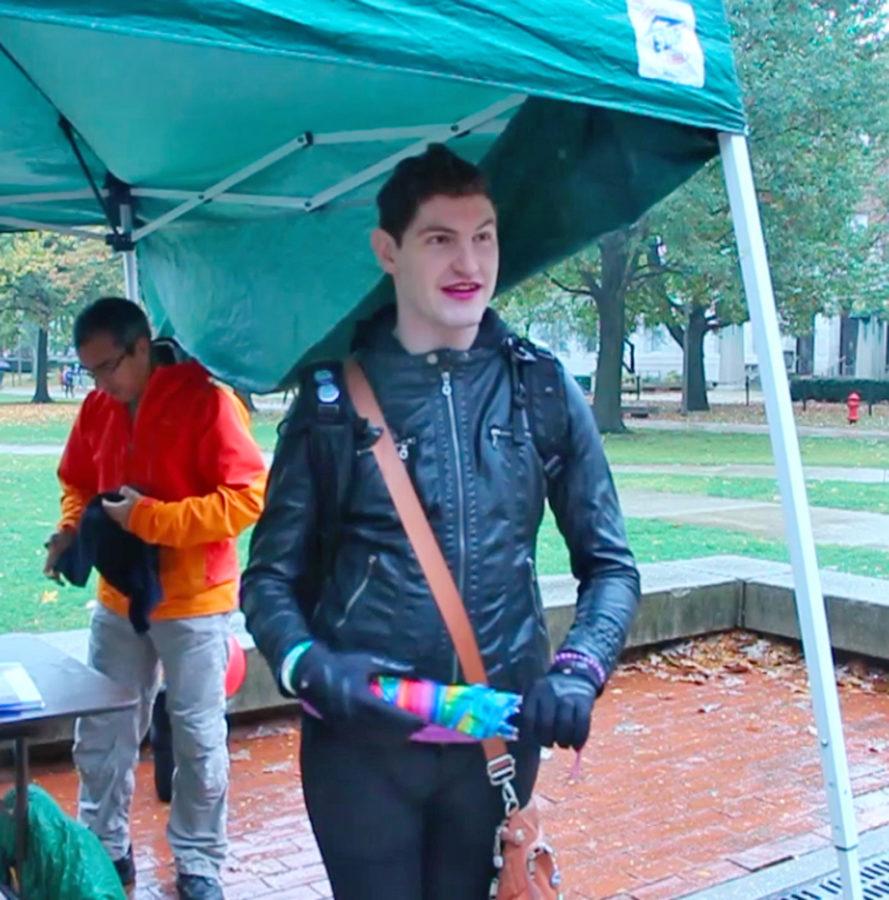 Stephanie Skora’sCC hair has been a point of issue for her. She didn’t want a short cut for fear of projecting the traditional male image, consistent with the gender she was assigned at birth, but something about growing the long tresses stereotypically expected of women didn’t fit her quite right either.

“I wanted nice, long luxurious hair, I wanted a cute little braid,” said Skora. “And then I realized, why am I trying to conform to what people tell me femininity has to be? I’m going to make my own femininity.”

Skora had gone from feeling trapped at home by her mother’s rules for how to keep her hair to feeling constrained at college by traditional notions of femininity. She had simultaneously grappled with what hairstyle and general look she thought would be fitting for her gender identity and what exactly that gender identity was.

Now a student activist in her final year at the University, Skora comfortably identifies outside of the gender binary. As a freshman, she learned surgery wasn’t a required step for her to identify as a gender other than the one she was assigned at birth, and for several years identified as a trans female. She said her Gender and Women’s Studies major has led her down a path of self-discovery.

“I started to question my own gender more,” said Skora. “I started to look at myself and think about who I was and how I identified and I decided that ‘woman’ didn’t quite fit me anymore; ‘woman’ fit me like a size 10 shoe on a size 11 foot, and so I identified from that point on, and I still do, as a genderqueer woman.”

Genderqueer-ness is an umbrella term for people who do not fit within the gender binary. While much of the western world recognizes male and female as the only genders, there are a variety of cultures throughout human existence that recognize many other genders. Sulawesi Indonesian natives called the BugisCC recognized four different genders, while indigenous Siberian Chukchi people recognized seven genders outside of the binary. Even in North America, prior to the influence of European settlers, native tribes of the Great Plains were among many peoples to interpret gender on a spectrum rather than as a binary.CC

Some would argue, Skora included, that gender binarism is inveterate in the modern western world; the first thing mentioned upon welcoming a baby into the world is often a declaration of the sex of the newborn. Job titles, like waiter or waitress, and fill-in-the-blank boxes with “male” or “female” as the only options can be seen as reinforcements of the black-and-white nature of gender binarism. Specific pronouns pertaining to gender suggest that it is ingrained into the English language, while many languages worldwide, including Estonian, Yoruba and Finnish,CC do not define gender with pronouns and instead refer to people in gender-neutral terms.

Hints of non-binary gender-inclusion are beginning to surface in the U.S.: boxes for “other” are popping up on forms where previously only “male” and “female” existed as options, and the introduction of gender neutral and inclusive pronouns such as “ze” and “hir” are changing the nature of the English language and how people are referred to. The national prominence of Caitlyn Jenner for some might suggest a movement toward general public tolerance and celebration of trans people.

However, violence against queer and trans people in the United States would suggest that the notion is not accepted nationwide.

A 2011 study reported that 78 percent of transgender and gender expansive students grades K-12 experienced harassment, 35 percent experienced physical assault and the dropout rate was nearly one-sixth. 2014 saw an 11 percent increase in anti-LGBT homicides, most of whom were people of color.

Skora keeps a death count. She said she’s not alone in her accounting of death across the queer and trans community. The numbers for death by violence differ across the board because some people aren’t identified as trans or gender expansive upon their deaths and thus are not included into studies meant to take their deaths specifically into account.

She also notes suicides should be factored in when measuring trans and queer death where they often are not addressed in studies.

In total, Skora estimates she’s participated in approximately 50 organized protests in her time at the University.

“If you’re looking at a protest as you go outside and you chant and you hold a sign and you say ‘roar roar,’ that’s a very specific definition,” said Skora. “But another way to look at a protest is when you are taking direct action to disrupt the actions of a being or an entity or multiple people who have power and trying to shape or alter their actions in a way where it can provide more access or more power or more resources to people who are being ignored. And I do that every day.”