Refugees to be refused 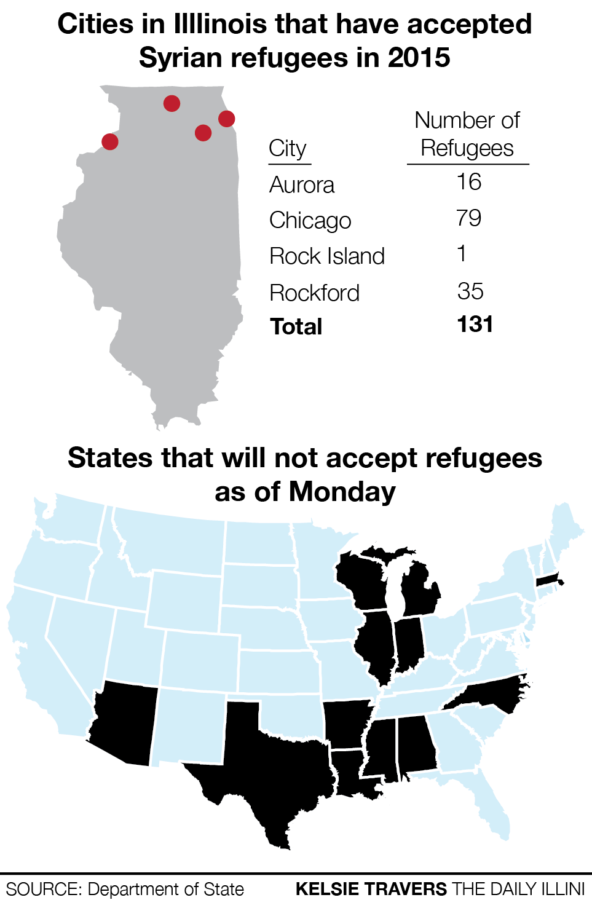 Despite Gov. Bruce Rauner’s announcement to temporarily suspend Illinois accepting new Syrian refugees, there are many people within Illinois who believe more refugees should be accepted into America and at a faster rate.

Rauner’s Monday announcement was made in regards to the Nov. 13 Paris terror attacks, according to a press release from the Governor’s office.SO The Islamic State has claimed credit for causing the Paris attacks, and various news organizations are reporting that more than 120 were killed from the terror attacks.SO

Illinois is now one of several states that is not taking in Syrian refugees. Texas, Louisiana, Massachusetts, Michigan, Alabama, Mississippi, Indiana, Florida, Arizona, North Carolina, Wisconsin and Arkansas will not accept refugees either.SO

On Sept. 16 — two months before Rauner’s announcement — in a speech on the Senate floor, U.S. Sen. Dick Durbin announced the U.S. should be prepared to accept 100,000 Syrian refugees, far outpacing the number the administration stated it would accept.SO

According to the Department of State, Illinois has accepted around 131 Syrian refugees this year.SO

Syria’s civil war has led to many Syrians fleeing the country, and as of Nov. 3, there were 4,287,293 registered Syrian refugees, according to the United Nations High Commissioner for Refugees.SO

To be resettled into the U.S., one must be residing outside of their country because of persecution or a well-founded fear, according to the U.S. embassy’s website. The applicant must be able to prove they aren’t firmly resettled in another country.SOhttp://damascus.usembassy.gov/visas/political-asylum-and-the-united-states-refugee-program.html

Most, she said, do not come over with more than a suitcase, and sometimes they come with just the clothes they’re wearing.

She said the process to be accepted for resettlement in the U.S. takes quite a long time, and those refugees jump through hoops to prove they are not a threat to the U.S.

Many refugees also face a culture shock, she said. Some of these refugees might not have had jobs in years, and refugee children might have not been in school for years either.

Hlavna believes many are traumatized, and she said most are grateful to be able to get on with their lives.

“They’re not a threat,” Hlavna said.

Marter said those who oppose accepting refugees think it would lead to opening the doors open to terrorists.

Scott Constantine, sophomore in geology and geography, has done geographic analysis on the numbers of Syrians who have been internally displaced within Syria.

He found that many Syrians over time have left areas where the Islamic State inhabits, and many of those who have been internally displaced, went to the borders of Syria.

Constantine is in favor of the U.S. accepting these refugees.

He said if he were in the situation these refugees are in, he “would want somewhere to turn.”

Rauner announced Monday in a statement that the state of Illinois will not be admitting Syrian refugees in the aftermath of the Paris attacks Friday. The attacks were made by Belgian and French nationals affiliated with ISIS.SO

Rauner was among several other governors, such as Massachusetts Gov. Jim Baker and Texas Gov. Greg Abbott, who issued statements declaring Syrian refugees will be barred entry from the states.SO

“We must find a way to balance our tradition as a state welcoming of refugees while ensuring the safety and security or our citizens,” Rauner said in the statement. “The state of Illinois will temporarily suspend accepting new Syrian refugees and consider all of our legal options pending a full review of our country’s acceptance and security processes by the U.S. Department of Homeland Security.”

Federal law gives the governor responsibility for administering and supervising the refugee resettlement programs in their states, said Catherine Kelly, press secretary for the Governor’s office.

Kelly said the governor “has simply taken the responsible and prudent step of suspending the resettlement of Syrian refugees pending this ongoing review of our participation in the refugee resettlement program.”

According to the Department of State, Illinois has taken in a total of 169 refugees from Syria from 2010-2015.SO