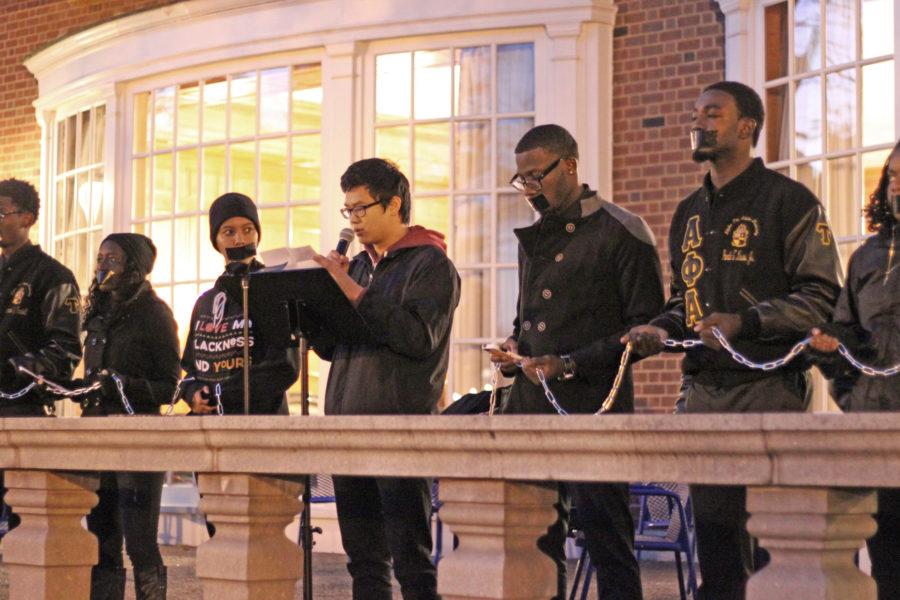 U of I Students gather on the main quad to share personal and anonymous experiences with racial discrimination on campus for the Vigil.

Interim Chancellor Barbara Wilson released a statement Monday in response to the vigil held by Alpha Phi Alpha fraternity and a number of other student organizations on the Main Quad on Thursday.

The vigil was held to discuss racism and discrimination present at the University. Students shared stories, in the form of student-written narratives and poetry, that described their experiences.

“Universities like ours must be places where all are respected, where everyone believes their voice will be heard and where views may be freely and safely expressed and debated,“ Wilson said in the release. “Our students are courageous in calling attention to the challenges we face in making this a campus that is truly welcoming to all people regardless of race, ethnicity, gender, sexual orientation or socioeconomic background.”

The vigil took place just a week after protests at the University of Missouri in Columbia heated up, when students camped out on the Missouri campus to protest racial discrimination. The student group Concerned Student 1950 called for Missouri system president Tim Wolfe’s resignation, following his failure to address issues of discrimination at the university. On Nov. 9, Wolfe resigned from his position.

http://www.cnn.com/2015/11/09/us/missouri-protest-timeline/In the press release, Wilson said that the stories that administrators heard at the vigil have encouraged the administration to implement changes at the University to eliminate racism- and discrimination-related incidents.

“It is our responsibility to take what we hear and work with the campus community as a whole,” the release said.