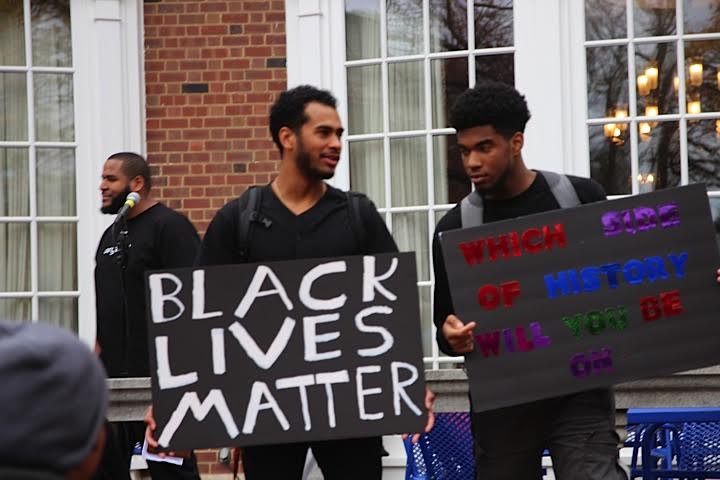 Students advocate for racial equality at a rally on the Main Quad on Nov. 18.

In the press release, the Black Students for Revolution encouraged solidarity and stressed the need for revolution and the use of “grassroots actions to restructure an oppressive system so that all people have equal distribution, rights, and opportunities to material wealth, health, and safety at the University of Illinois and other campuses across the American empire.”

A Facebook page called the Illini White Student Union was created Wednesday, hours after a Black Student Solidarity rally was held on the Main Quad. The page included racist posts and encouraged segregation and suspicion among students.

Gus Wood, a Ph.D. candidate at the University and a member of Black Students for Revolution helped organize Wednesday’s rally. Wood said he believes the White Student Union has followed the same pattern that white supremacists or “whites-only” groups have historically taken. He said believes they aren’t working to create a movement or show solidarity but to intimidate black people.

“Every time that something like a whites-only or ‘all whites matter’ thing comes about, it’s always in direct response to black people showing racial pride for themselves or getting together to celebrate or protest what they see to be injustice,” he said. “They always develop, and are constructed to respond to — or to retaliate against — black progress or black collectivity or black solidarity. That’s their purpose.”

Wood said he does not believe the University administration will be helpful with the movement because in the past it has not been extremely supportive of movements for racial equality.

“We will use political education to understand how oppression works on the campus, then we can be successful in pushing those groups off the campus because we cannot rely on the administration to shut down racism on the campus,” he said. “We just can’t. So we’re going to have to do it ourselves.”

University of Illinois Police Chief Jeff Christensen sent a Massmail shortly after Wilson, reminding students of their resources and assuring the campus community the UIPD is committed to it’s safety. Christensen said the UIPD would continue to monitor social media and investigate all credible threats.

Facebook had the original page taken down Wednesday evening but since, other versions of the page have been created. The page has also been condemned by the Office of Inclusion and Intercultural Relations and the Gender and Womens Studies department.

The University’s administration was also criticized in the press release for demonstrating a “perverse neglect for the needs, safety, and overall quality of life for black people on its campus.”

Wood called for other groups on campus to stand in solidarity with the Black Students for Revolution.

In the press release, the group cited the results of the 2015 Microagressions Report which found that 39 percent of people of color reported feeling uncomfortable on campus because of their race. Additionally, the group noted previous allegations of segregation and racist practices within the women’s basketball program at the University.

The release also addressed a number of Yik Yak posts that referred to black people as “chimps” in the wake of the rally. The White Student Union Facebook page referred to the rally and activists associated with the Black Lives Matter movement as “terrorists.”

Wood said he was especially distressed by the national media’s coverage of the recent events. He said the focus of news outlets on the White Student Union page perpetuates the racism the Black Students for Revolution have been trying to end.

“We are very disturbed by the way the national media has been using the White Student Union page as a subject for their story and they’ve been pushing us to the periphery,” he said. “That is very disheartening when we’re trying to point out racism on the campus but the national media has been sensationalizing white hate groups forming instead of showcasing the black rally or the black solidarity groups on campus forming.”

The Black Students for Revolution praised black students at the University in the press release for their “revolutionary spirit” and implored them not to be discouraged by the “explicit racism on campus today.” The group encouraged those who wanted to create change at the University to join them.

According to the release, the “next step” will take in the first week of December.