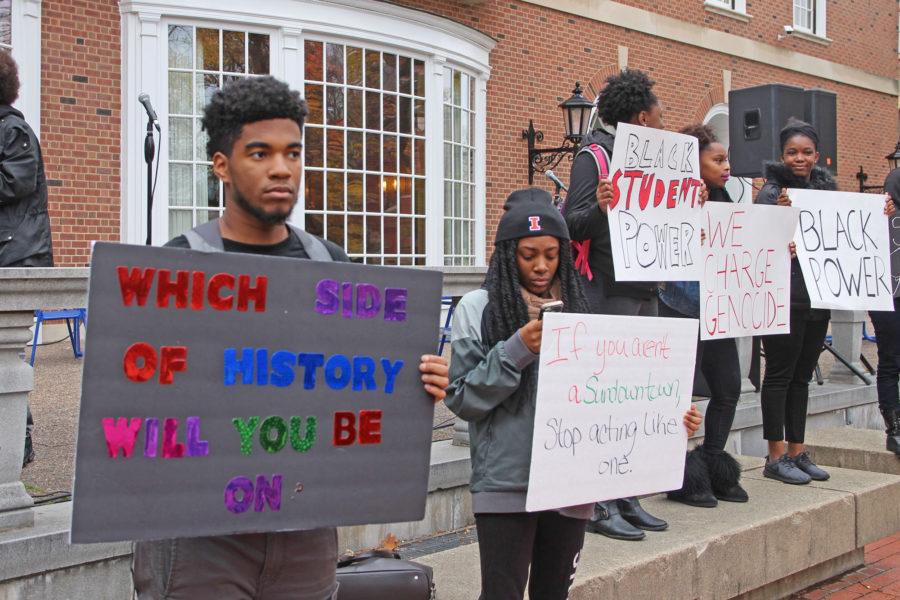 While protests at Mizzou meant to bring the issue of racism across campus to light, white student union Facebook pages created this month claim to exist for the same reason.

The Black Solidarity Rally that occurred on the Quad on Nov. 18 sparked the creation of the “Illini White Student Union” Facebook page.

The page was swiftly dismantled by Facebook and the University due to copyright infringement. Since then, white student union Facebook pages have been created under the name of the University as well as dozens of other universities across the nation.

“It’s a little bit disappointing because it shows where we’re at. Not just as a school but as a nation,” said Ron Lewis, Illinois Student Senator and co-chair of Being Black At Illinois.Currently, there are around 30 white student union Facebook pages. Most appear to be acting strictly in cyberspace, but some suggest action outside of social media.

According to a University of California Santa Barbara “White Student Walk Out” Facebook page, students will leave their classes at 12:30 p.m. on Jan. 19 to “show solidarity for our brothers and sisters of European descent.”

The page also shows multiple posts questioning the legitimacy of the event.

Currently, the “University of Illinois White Student Union” Facebook page has around 670 likes.

However, scrolling through the faces of those that like their posts and shared articles, it is unclear how many University students are involved with the page. Most of the “likers” are from the Urbana-Champaign area, but not associated with the University.

Circe Neraida is not a student or alumni of the University but “likes” the Facebook page.

“For me at least, it represents true equality. A message is sent that all whites are to blame for things in the past. And with that, it is legitimate to hate all whites and to say that whites can’t be discriminated against,” she said. “Everyone has the right to be proud of their race, culture and heritage including whites. This is what the page represents.”

Another “Illini White Student Union” Facebook page is also in existence but has significantly fewer likes.

On this page a man posted, “It’s time to stand up against anti-white discrimination.”

His profile states he is from Australia.

Despite this, the White Student Union pages claim to reflect the views of University students.

The creator of the “University of Illinois White Student Union” Facebook page said in a press release the pages are not the work of the white supremacy group that attempted to start a white student union at Towson University in Maryland. The group,TradYouth, publicly praises the efforts to protest anti-white hatred and bigotry among young college students.

“From my knowledge this has been very many discontented individuals acting 100% by themselves after being inspired by the first page,” the administrator of the TradYouth page said in the public statement.

They also said the emergence of the pages were not a centralized or coordinated effort and most administrators of the pages are in no way connected with any white supremacist groups and are anti-supremacy.

However, some pages have similar and seemingly copy-and-pasted mission statements.

“Much of the community goes looking through our pages with a mission and mindset. This mindset is find the error and hypocrisy,” said the creator of the Facebook page in a message. “The problem with this is, it leaves no room for the person to actually see what the group is here for.”

The creator said they’re a student majoring in communication at Greenlee school of journalism at Iowa State.

“Well what started as a retaliation against black lives matter turned into real concern – that anti-white was a real factor that people were scared to speak up about,” they said.

The creator said they have experienced support for the page and cites interviews with “non-white supporters” in a Facebook post.

“We’re not responding specifically to those white student unions,” said Lewis. “Our purpose is not to respond to negative people who try to weigh us down on what we’re doing. Our response is just to continue what we’re doing and try to impact as many people as possible”

Lewis said that the emergence of the pages isn’t completely negative.

“It just shows that as a movement for African Americans and allies, we are making a difference. So it’s bad, but it’s good at the same time because it shows we are making an impact,” he said.

Trustee Jaylin McClinton supported the removal of the first “Illini White Student Union” Facebook page but wrote an open letter to University President Timothy Killeen about the lack of administration concern. He said it was “disturbing” that Killeen and the board had not voiced their concern about “this extreme form of bigotry.”

Lewis said there should be some kind of conversation between administrators and students that shows that the administration supports diversity on campus and reassures the safety of students.

After the first page, Interim chancellor Barbera Wilson said the University will continue to strive to promote respect and community on campus in a Massmail.Following her statement, Jeff Christensen, University of Illinois Police Department, sent a Massmail stating the UIPD would continue to monitor the page. “We know that incidents like this create a sense of fear and shake your confidence in the safety of our campus,” Christensen said. Christensen said the University’s cultural and resource centers will be available for students who need a support or a safe space for conversation as they arrive back on campus.