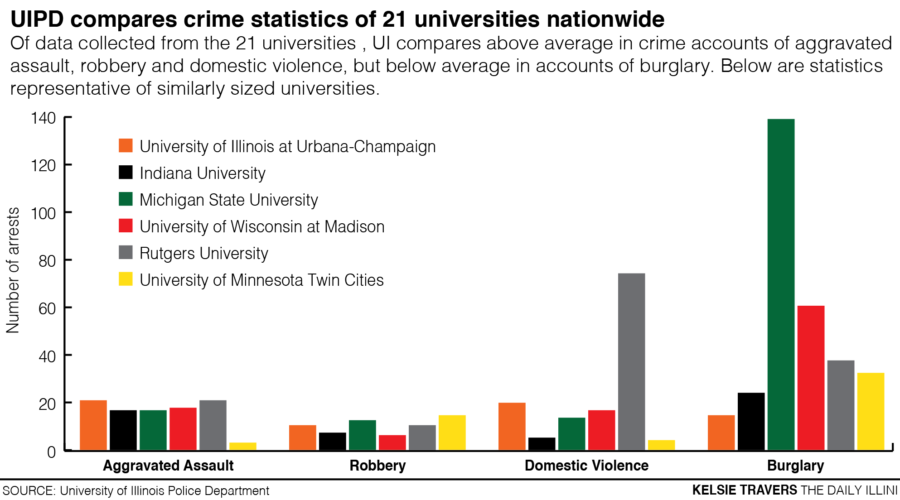 The University leads the pack in the amount of aggravated assaults that have occurred on campus when compared to 21 comparable universities, according to a report by University Police.

The information comes from the annual Jeanne Clery Disclosure of Campus Security Policy and Statistics Act, which mandates that public universities receiving federal funding must disclose crime rates and statistics.

The University, tied with Rutgers University, had the most occurrences of aggravated assault; the University reporting nearly double the average of other universities.

Both the University and Rutgers University had 20 reported cases of aggravated assault in 2014, compared to an average of about 10.7 assaults.

Pat Wade, UIPD spokesman, said the statistics provide context for the public about crime information on campus. The report marks the first time the UIPD has publically released a comparison of the University’s statistics to similar universities, following feedback on a Campus Safety Notice this past fall.

“We do a really good job of talking about public safety and crime issues on campus, but we don’t necessarily give students, faculty and staff a good picture of what that means for us,” Wade said. “We just wanted to give people a place they could go to to look at the statistics for all these different schools that are pretty comparable to us.”

Despite recent efforts by University officials to promote the It’s On Us campaign, which aims to bring awareness to sexual assault on campus, UIPD Police Captain Tony Brown said he expects reports of sexual assault to increase.

“What we would expect probably is that as more of this education and effort moves forward, we can expect the the cases of sexual assault will increase,” Brown said. “That in no way means that there are more sexual assaults occurring on campus.”

Rather, Brown said the increased reporting may reflect the efforts of educational campaigns that encourage sexual assault survivors to come forward and report assaults.

Additionally, Brown emphasized that the statistics are also subject to the geographical differences of each campus.

For example, although KAM’S is off-campus, its proximity to the Main Quad and several academic buildings makes much of the surrounding sidewalk and path reportable for on-campus police. For campuses with nightlife that takes place farther off-campus, similar crimes may be occurring but outside of the jurisdiction of campus police.

Though Wade said he is proud of the UIPD’s work in publicizing crime reports on campus, he noticed a hyper-awareness of campus crime that could distort the actual reality.

“People are super aware of crime issues here, and every time they got an email delivered directly to their inbox about a robbery it scares them,” he said.

The Clery Act mandates that college police departments inform the public of all reported crimes on campus; not all local police agencies are required to do so.

“When we can put the actual statistics into context with other places just like us and people see that ‘Oh it’s not out of control here,’ people are a little bit surprised by that,” Wade said.

“A lot of people think that if they get a less expense bike, then it won’t get stolen. That’s not the case,” said Kevin Stillwell, staff writer and author of the report. “Most bikes thefts are actually inexpensive bikes.”

According to the report, 58 percent of reported thefts occurred with bikes worth $200 or less.

Stillwell said the purpose of the report was to fill a void in information about bike theft for students on campus.

“Most people hadn’t really gotten any data about bike theft,” Stillwell said. “People were happy to see not just data on bike theft, but that data broken down, analyzed and put in a way that was easy for people to digest.”

Like Stillwell, Wade believes the statistics provide insight to further help the public make decisions regarding safety and prevention.

“That’s at the heart of why we do these things, because we want everyone to have the information and the tools they need to work with us to protect themselves,” Wade said.