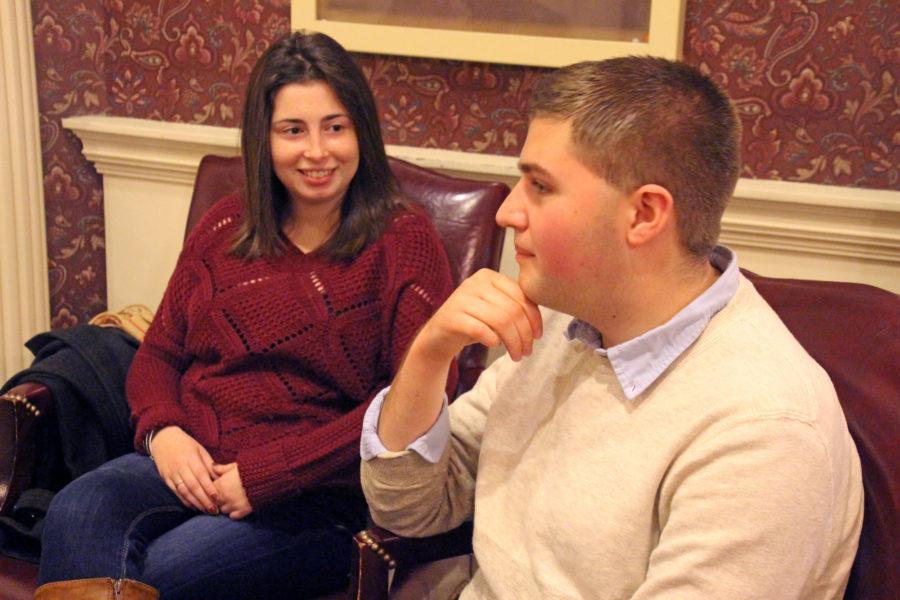 Student Senate vice-presidents (left) Sarah Hochman and Matt Hill discuss what they have done during their time in the Senate.

When asked what Matt Hill’s dream job is, Sarah Hochman jumped in before he could answer.

“I bet I could guess,” she said. “Press Secretary of the White House.”

“And yours is Secretary of Agriculture,” he guessed, correctly.

Hill and Hochman have served as the Illinois Student Senate vice presidents — external and internal — respectively, for the past three semesters.

The two will officially step-down from their positions on Wednesday due to “unforeseen circumstances and opportunities.” Hill and Hochman announced their resignations in a joint-letter in November.SO

When asked about these opportunities, Hill said that neither of them would be on campus to serve the senate.

“We are both finalizing pending opportunities,” Hill said.

Whatever opportunities await them next semester, their dream jobs serve as a reflection of their work in the student senate.

“I view myself as a connector,” said Hill.

Hill said one of his passions as vice president was connecting students on campus to the student senate’s work and campaigns.

Hochman spoke about her interest in policy — specifically those that could impact a vast majority of people.

“The biggest thing for internal (vice president) is to help things run and anticipate needs,” Hochman said. “Before student senate, I knew what hard work was — but really being able to make a difference in others’ lives besides my own — I think that’s really prepared me for any future opportunity.”

Hill said Hochman has been a “driving force” in the student senate.

Hill and Hochman were both large contributors to the “It’s On Us” sexual assault awareness campaign which drew Vice President Joe Biden to campus in AprilSO.

Despite accomplishments, the two also spoke of the challenges that come with the job.

“We’ve both learned so much about how the University works, which has been cool but also challenging,” Hill said. “Whether you’re trying to buy poster board or lead a huge campaign, there’s many different hurdles you have to overcome.”

There’s a lot of “red tape” to work around, Hochman said.

However, Hill and Hochman said building relationships across campus can help forgo some bureaucratic difficulties.

The two new vice presidents Laura Saldivar, senior in LAS and Jill Whitman, sophomore in organizational communication will be sworn in at the ISS meeting on Wednesday.

Hochman and Hill said the transition should go smoothly because the two new leaders are already familiar with each position.

When asked if the two would be upset about not working together next semester, they turned to look at each other.

Although neither Hochman or Hill could confirm what they will be doing next semester, they are not worried about the end of their run together.

“I think we’re going to be just fine,” Hochman said. “Nothing will separate us, and let’s just leave it at that.”