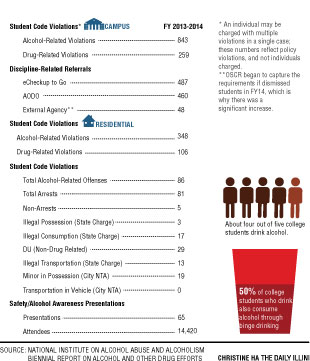 As the state of Illinois approaches its seventh month without an official, approved budget, Illinois police are starting to see consequences as cuts to programs and initiatives continue to be made.

Due to the lack of a state budget, the funds to pay young undercover buyers working for the Illinois Liquor Control Commission are currently unavailable.

While the lack of a budget has affected the resources to initiate undercover stings in towns such as Berwyn and Oak Lawn (who do these checks in cooperation with the state), Champaign rarely works with the state on liquor sale checks, said Champaign Police Sgt. Joe Ketchum.

“We at times do compliance checks in cooperation with the state but these are few and far between,” Ketchum said.

“The past two years the city received a grant through Community Elements to conduct extra compliance checks, but this year the grant is not available,” Ketchem said. “We will be conducting the same amount as if we did not have the grant before.” Checks are done by police in Champaign and Urbana, state troopers or Secretary of State police on Thursdays, Fridays and Saturdays for about five to six hours at a time, said UIPD Lieutenant Joseph McCullough.

The University of Illinois police, UIPD, contribute some officers to stings conducted by Champaign and Urbana police, though that may be a little tougher to do now.

“We’re occasionally involved in those (stings); we’ll contribute a couple of officers for that. Generally those are done more extra duty, extra time, overtime,” McCullough said. “We are very cognizant of our overtime right now.” With the budget standoff back to July 1, McCullough said the UIPD has been preparing for tight money. “You can see the writing on the wall, we’re gonna get in some times where we have to clamp on the budget and every penny is accounted for,” he said. “We’re holding off on some of our bigger projects and equipment purchases, just to see what happens with the budget.” Along with police presence, Phil Owusu, a Joe’s Brewery employee, said the bar’s ID checking system also gets the job done. “We’ve got a very good track record of our bartenders (checking) for ID from customers,” a representative from Joe’s said. “MillerCoors over the last year has done four different bar checks and our staff successfully asked for ID all four times. We’ve also been checked a dozen times in recent memory by the local and state authorities and have a similar track record. However, stings and investigations are done independent from the bar.

“As far as when the officers are inside, we don’t get involved in their investigations,” the representative said. “They are very experienced in handling those situations and they do a very good job with no help needed from us.”

UIPD officers are out every night in two shifts, 4 p.m. to 2 a.m. and 10 p.m. to 8 a.m. Most of the contact patrollers have with underage drinkers are people out doing something to “get our attention,” McCullough said.“We’re focusing on where we do tend to see more crime, most alcohol related,” McCullough said. “Normally the way our shifts are set up, we have officers out there every day anyways on regular time. Those are just regular shifts, those aren’t things we are reimbursing extra through overtime.”

Last year, the UIPD issued 147 alcohol related citations; 600 additional incidents were forwarded to be handled by the University, McCullough said.

“We try the education-based type of enforcement,” McCullough said. “There are thousands of people underage who consume alcohol out here. We’re going to contact a lot of people, when we get compliance, that’s perfect. If they become an issue or they do something that is deemed necessary for some type of intervention, we’d rather initially send them through the school as a referral.”

Despite their efforts to deter this behavior, underage drinking is also possible through transactions with fake IDs. Even on a campus with a bar-entry age of 19-years-old, McCullough says the UIPD sees these violations all the time. He said rather than charge students who are caught with a fake ID, the UIPD looks for compliance or more information on who is manufacturing the IDs.

“It is a felony to have a fake ID,” McCullough said. “A lot of our students are applying for jobs in an already hard market, when they have to answer if they have ever been convicted for a felony, employers will look at that.”

Despite the budget cuts, McCollugh said the UIPD will continue to keep the campus safe.“(The budget) is in no way affecting our man power out on patrol, having our uniformed officers out there to protect our students, staff and community,” he said. “We’ve done everything we can to make sure that is not touched. Our time on the street and enforcement will not decrease.”