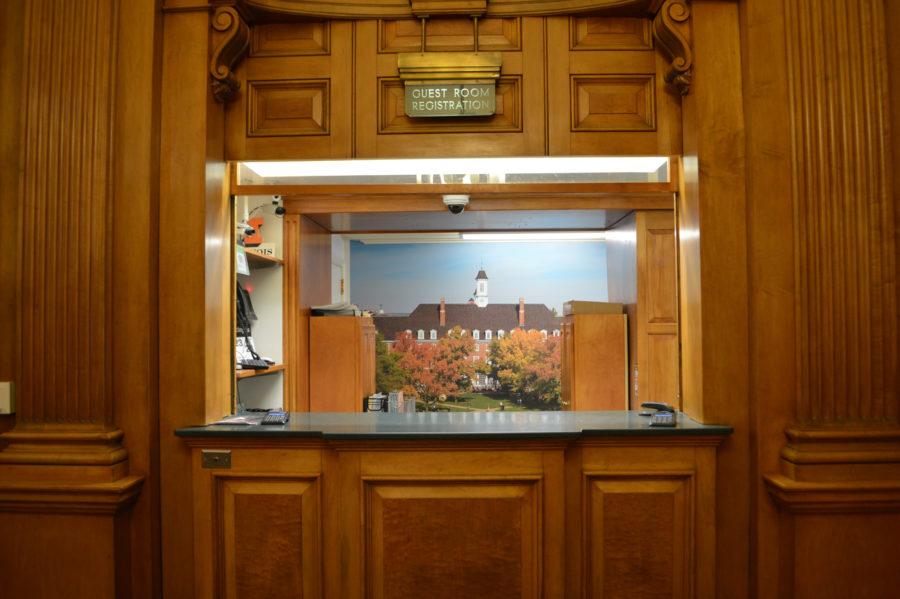 The Illini Union Hotel is a popular destination among alumni and parents who are visiting campus.

Despite the opening of new hotels like Marriott TownePlace Suites on Green Street last summer, the Illini Union Hotel continues its 74-year business on campus.

The Illini Union Hotel, located inside the Illini Union at 1401 W. Green St., has 72 rooms, including VIP suites and views overlooking the Main Quad.

According to Laurence Uphoff,ch the manager of the hotel, the original hotel was built on the fourth floor of the north side of the Illini Union, where the event rooms are now located. In 1963, an addition was built to accommodate the growing University enrollment, and the hotel was relocated to the third and fourth floors of the south side of the building overlooking the Quad.

Uphoff said the Marriott has affected business but not drastically. Primarily, the two hotels compete with each other because of their location to campus.

He said the hotel generally gets around 31,000 customers a year.

Modeled after Colonial Virginia, the hotel has a historic atmosphere, with its architecture and woodwork designs, that can set it apart from newer Green Street additions. He said people choose to stay at the Illini Union Hotel because of tradition as well.

Pooja Chirala,ch sophomore in LAS, stayed at the Illini Union Hotel after a long commute from California on a campus visit the summer before her freshman year.

Chirala said she and her Mom chose the Illini Union Hotel over others because of its centralized location.

“The hotel is right in the middle of everything, and we were going to take a tour of campus,” Chirala said. “All of the meetings I had were in the Union itself, so it was really convenient for us.”

Chirala said she enjoyed the hotel and that it felt “comfortable and homey.” Adding that her stay at the Illini Union Hotel contributed to her decision to come to the University.

“It made me like U of I more, especially since it was located in a place where all of my classes were surrounded,” Chirala said.

The new Mariott shares a similar, centralized location to the Illini Union Hotel, but exudes a modern feel, opposite of the Illini Union. It opened on July 1 above the Caffe Bene on Green Street near Sixth Street.

Sandy Overman, chMarriott TownePlace Suite’s general manager, said many of the new hotel’s customers are attracted to staying there based on brand loyalty and a familiar name.

“It’s something new. Mariott has a lot of brand loyalty, and a lot of people have Marriott rewards that they want to use,” Overman said.

Marriott TownePlace Suites also includes a full kitchen in all of their rooms, in addition to offering an extended stay for those planning on staying in town for longer than the usual weekend.

“When people come to Champaign, they’re going to say, ‘What’s within the area?’ and look at what’s within five minutes from campus,” Overman said.

Champaign-Urbana has seen a boom in the hotel industry in the past few years. Industry leaders such as Hyatt and Hilton have recently built new locations in the community, while other options such as the iHotel continue to cater to clients with a campus focus.

But regardless of the campus choice, Uphoff believes customers want a new experience.