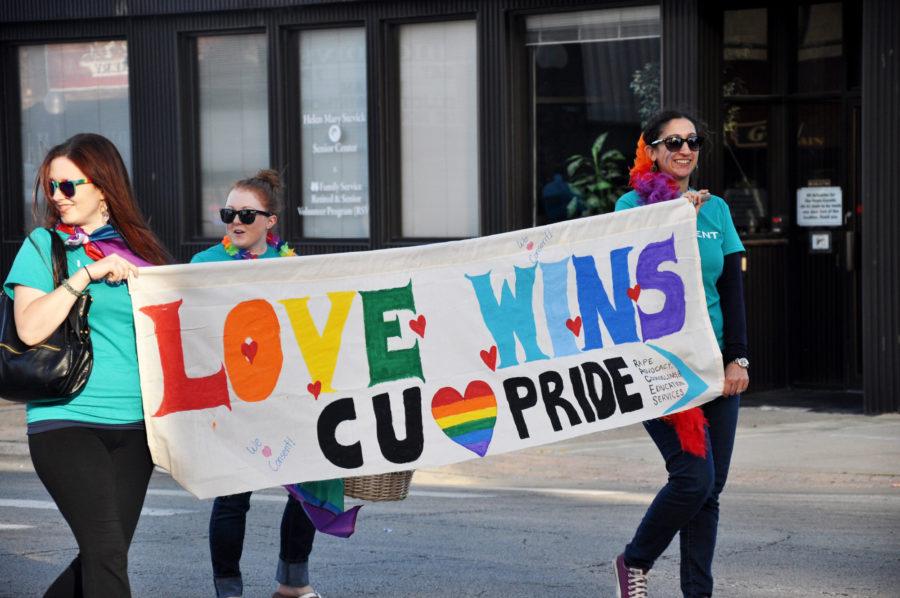 Residents walk through Main Street at the Champaign Pride Parade on September 19, 2015.

Mark Kirk, Illinois senator, became the first Republican senator to co-sponsor the Equality Act Tuesday. The Equality Act would ban discrimination against people on the basis of their sexual orientation or gender identity by building on past civil rights laws. These laws already protected individuals on the basis of race, religion and national origin, but would now potentially include sexual orientation and gender identity.

However, this act brings attention to issues of discrimination in today’s society. While all members of the LGBT Resource Center were unavailable to comment, Noah Chisman, freshman in FAA and member of the Theta Chi chfraternity said he has personally experienced discrimination on campus.

“I actually joined a fraternity on campus and was pleasantly surprised to find the fraternity life here to be (at least in my chapter) to be accepting,” Chisman said. “However, there was one brother who originally didn’t want me in the frat, simply because I was gay.”

Chisman explained that the other fraternity brothers “shot that member down” and all agreed they wanted him in the frat. Chisman said he wasn’t there for that process, but had heard of a slight disagreement before he was inducted.

“It’s been a very interesting experience,” he said. “Part of it has been sort of difficult because that has been one of the first times a lot of these guys have been exposed to a gay guy for a daily basis and getting to know and befriend one.”

Chisman said that while all of his brothers are good, well meaning people, it is hard to deny that his different lifestyle throws a wrench into the straight, white, male, privileged stereotype of a fraternity. Chisman is doing what he can to limit discrimination, including eliminating the use of slurs in his fraternity.

“Some of (the fraternity brothers) still occasionally use gay slurs, and while they don’t mean to actually be offensive to gay people, I do call them out on it,” he said. “But I have seen some decided improvement, and the guys have been really nice and people other than me have stuck up for the idea of knowing what words are and are not okay to say.”

Chisman said his experience coming into the fraternity has been a process, and while it can still be difficult at times, it has been an overall welcoming and accepting one.

“Now I feel that a good amount of people in this country know that it’s not socially acceptable to discriminate against the LGBT community, but we’re in between a new age of acceptance and the leftover hatred of older generations,” he said. “While the hatred has seemed to have gone away, the slurs born from that hatred have not.”

Chisman said that initially having to come out to his fellow frat brothers and waiting to see how they would react, was his most memorable moment.

“I wouldn’t have stuck it out if I hadn’t (felt comfortable being myself), but the overwhelming, enthusiastic support was outstanding and I never really felt awkward or that I had forced anyone into accepting me,” Chisman said.

Coming to the University and joining a fraternity were not the first instances that Chisman has felt ostracized because of his sexual orientation.

“My parents weren’t accepting and neither was the community I grew up in, but I don’t know if I can think of any formal kinds of discrimination,” he said.

Chisman was advised by his parents to take down Facebook photos of himself celebrating gay pride at a parade, but chose not to remove them, expressing disinterest in working for a company that would refuse him, based on sexual orientation. Although Chisman hasn’t put much thought into how his orientation would impact employment opportunities, he supports the stride Kirk is taking on make LGBT discrimination illegal.

“Personally, I don’t think a lot of the idea of getting discriminated against, but feel as though I wouldn’t want to work for anyone who would think of discriminating against me because (of my sexual orientation), so I’ve never thought of that as an issue.”