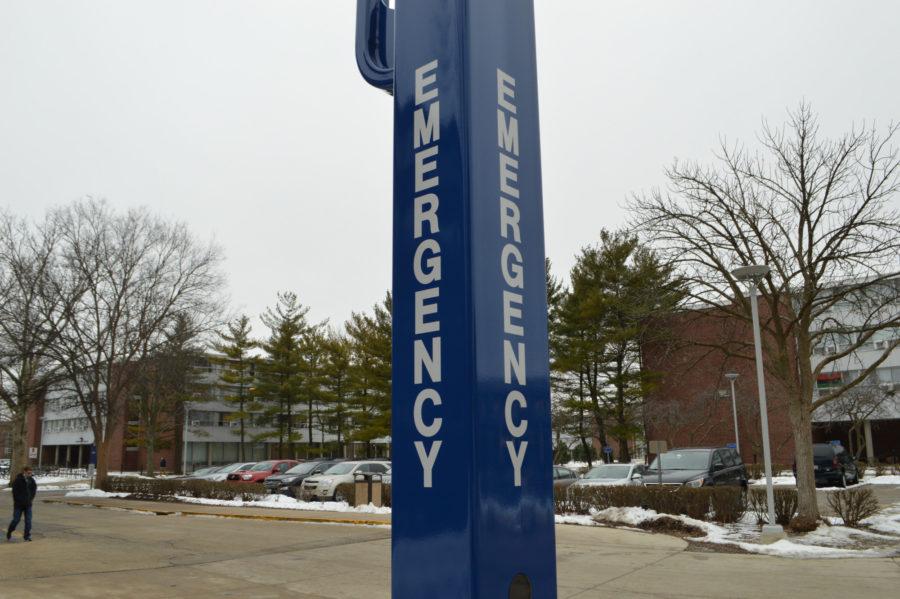 The blue emergency phones can be found in a variety of convenient and visible locations all over campus.

On Jan. 15, the University campus experienced a nearly 2 ½-hour outage to the entire campus phone system. Callers trying to dial off campus and people trying to reach on campus phones failed to get through; however, calls between on-campus phones worked normally. The University said a third party vendor, Windstream, was responsible for the outage. As a result, an Illini Alert was released informing students and faculty to use cell phones to dial 911 in the case of an emergency.JT

Brian Mertz, Chief Communications Officer of Technology Services,JT said this recurrence is concerning. The University contracted Windstream for 99.99 percent of uptime, which equates to roughly 4 ½ minutes of downtime per month, or outages. Yet within the year and a half since the University entered the contract, six outages have occurred. Each lasted nearly an hour, and some extended upward of six hours.JT

“It’s obviously something we’re not happy about. We strive to provide the campus and community with best service possible in everything we do,” Mertz said. “We’re a global institution. We depend on being able to make phone calls during business hours.”

The issue led Mertz and Technology Services to consider the future of the University’s relationship with Windstream. The University’s contract with the company expires in June 2017,JT but according to Mertz there aren’t plans to switch vendors just yet.

“Anytime a major contract ends, we always consider if there are more improved technologies and more affordable options for any service that we contract with,” Mertz said. “The reliability and repeated outages will be a factor we consider. It’s hard to ignore this quality of service that Windstream has provided.”

Though in contact with Windstream during the outage, Technology Services said that is still waiting for a diagnosis about the cause of the outage. Michael Teague, Windstream’s spokesperson,JT said the company is still looking into the outage but he believes it’s connected to a simultaneous occurrence in St. Louis, Mo.

Teague said he understands the University’s concerns about frequent outages but noted that being a nationwide vendor presents variants among services.

“The systems generally work the same at a 50,000 foot level, but a lot (of the) time the components in the ground are different,” Teague said. “Everyone has their unique challenges. If every component and piece of network were the same, it sure would make it easy.”

“Part of figuring this out is to build the system in a way to address the issue if it occurs again. That’s a constant in our industry. People have outages,” Teague said. “Figure out, first and foremost, the problem. The second piece is figuring out who all was impacted and why.”

When the outage occurred, Technology Services worked with the University Police Department to issue an Illini Alert and notify faculty and students to use cell phones to reach 911. UIPD spokesman Pat Wade said the Illini Alert system informs the campus community during an event in which they may have to protect themselves in an immediate risk or safety concern.JT

For Wade, the phone outage presented an unusual situation. While not an immediate emergency, UIPD used their Illini Alert system to inform the community The idea of this preemptive action resulted from a previous phone outage.

“We had a similar outage a few months ago where the phones went down and we realized people were going to have trouble calling 911 if they needed to,” Wade said. “We recognized the need after that outage where we did not have a service set in place to alert people to use a cell phone to call 911.”

In the end, no 911 calls were made during the outage; however, METCAD, operators of the 911 line, would have been able to obtain the name and location of the caller, Mertz said.JT

Technology Services issued an Illini Alert during the last two phone outages but making use of the emergency system is the last step in the notification process. Technology Services uses an escalating scale when releasing information about on-going outages, Mertz said.

Correction: A previous version of this article stated that Illini Alerts are sent by Technology Services. Though Technology Services provides the technology for the alerts to be sent they are always dispatched by the University of Illinois Police Department. The Daily Illini regrets the error.