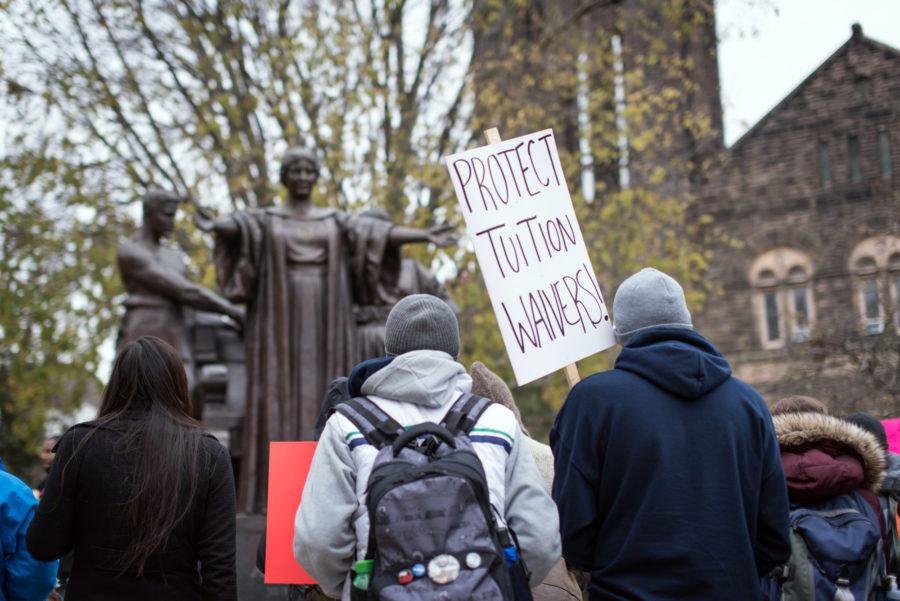 Students and faculty gather around the Alma Mater to voice support for graduate employee tuition waivers on Nov. 12, 2014.

The Graduate Employees’ Organization will celebrate its successful defense of graduate students right to tuition waivers at a rally Thursday.

Grace Hebert, grievance officer for GEO, said the organization was made aware Tuesday that an arbitrator found the University in violation of the terms and conditions of the GEO’s contract, in a case involving graduate students in the Professional Master of Computer Science program.

The GEO’s Facebook page states that for more than six years, the organization has been fighting for the protection of tuition waivers, but “the University administration continues to look for ways to erode tuition waivers and profit off of graduate students.”

Hebert said students — most of them international students — were being recruited specifically for Engineering’s MCS program, and were under the impression that they would receive an appointment when they got to the University. But, when the students arrived at the University, it was difficult for them to receive assistantship because the University departments employing them were asked to pay for the graduate students’ tuition, instead of the tuition being waived. Failing to waive tuition for students in this program violated the University’s contract with the GEO, Hebert said.

“The College of Engineering has started recruiting international students by telling them they can find a waiver-generating appointment when they arrive on campus,” A post on the GEO Facebook page stated. “After moving halfway around the world those students arrive at UIUC and find themselves functionally unemployable because their academic department demands that any employing department pay that employee’s tuition in cash!”

“Graduate students are an important part of our campus, and they are the backbone of our educational and research efforts in the College of Engineering,” Cangellaris said when asked about the GEO’s claims.

According to a statement from the arbitration, “The Masters in Computer Science (MCS) Program violated the 2012-2017 collective bargaining agreement, in particular the Side Letter included in that agreement, by seeking reimbursement for tuition costs of MCS students in assistantships in units other than the MCS program.”

Hebert said there are around 2,700 University graduate students, or members, represented by the GEO. Half of the members are signed members, which means they have voting rights in the organization. The current contract between the GEO and the University was signed in 2012 and runs through 2017.

Becky Schumann, co-president of the GEO, said she sees the organization as a “social justice organization that ensures that (students) get better working conditions as graduate employees.”

Hebert emphasized the importance of tuition waivers for graduate employees.

“As a teaching assistant, I receive a tuition waiver so I have to pay less tuition than I would otherwise, and that’s really important because otherwise I couldn’t be here,” she said. “I essentially would be paying to work.”

“International and domestic students who apply to our programs are treated the same in all cases, based on the tuition policy of the program that they are part of,” Cangellaris said. “The tuition policy for each program is explained in all pertinent literature and web materials describing the program. We absolutely do not tell students that support will be available or be a possibility when it is not.”

Though the arbitration has been finalized, the GEO will still hold a rally on Thursday. The event will include speakers at the Alma Mater and a march around Bardeen Quad and the North Quad. Attendees will then send postcards to Andreas Cangellaris, dean of Engineering, according to the GEO Facebook page.