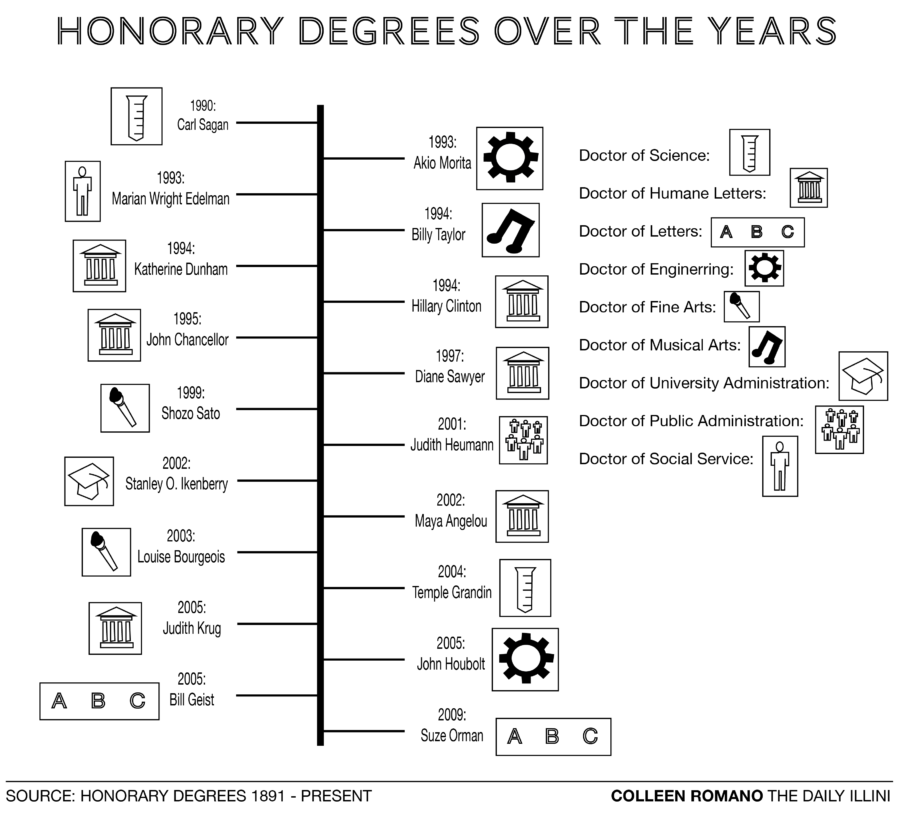 At graduation each year, thousands of students are awarded for their years of hard work with a diploma. But students aren’t the only ones recognized on that day. Since 1891, the University has awarded honorary degrees to people who have done exceptional work in their specific fields.

The list of nominees for this year includes Ron Adrian, former University engineering professor; Edward Taylor, Princeton chemistry professor; Jagdish Sheth, Emory marketing professor; Narayana Murthy, founder and former executive chairman of Infosys; and director Ang Lee. Lee, who is unable to attend the ceremony in May due to a new film, will be awarded his degree at another time.

An honoree can be nominated by anyone on campus, and the nominations are decided by academic units.

According to the Senate’s webpage on nomination criteria, “The prime, controlling consideration should be distinction. The person should have made a distinguished contribution to knowledge and creativity in the relevant field of endeavor, or have shown sustained activity of uncommon merit.”

Other than being well-known and well-accomplished in their profession, honorees can also be recognized for criteria specific to their occupation. The three things needed in order to nominate someone for an honorary degree include: a form that lists the person’s accomplishments, a list of people who could write letters of reference and a connection to the University.

“How are you going to judge a performing artist compared to a brain surgeon,” said former University professor of aerospace engineering. “They each have their own performance characteristics and their own achievements.”

After each academic unit concludes the nominee possesses the specific criteria worthy of an honorary degree, it is passed up to the Senate’s Honorary Degrees Committee, comprised of around seven staff members, faculty and a few student representatives.

“Each nominee is looked and judged on their own merits,” Hilton said. “We don’t make comparisons that this person is better than another.”

After reviewing the nominations, the committee determines if they wish to send out requests for letters of reference to help narrow down the specific honorees.

“We’re looking at this person’s impact on and their contribution to their field,” said Stephen Cartwright, chair of the Honorary Degrees Committee. “So they may be a humanitarian, they may be an entertainer, they may be an academic.”

Awarding honorary degrees to these individuals is also a sign of respect and appreciation for what they’ve accomplished and contributed.