Carnival: A celebration of Latin-American diversity 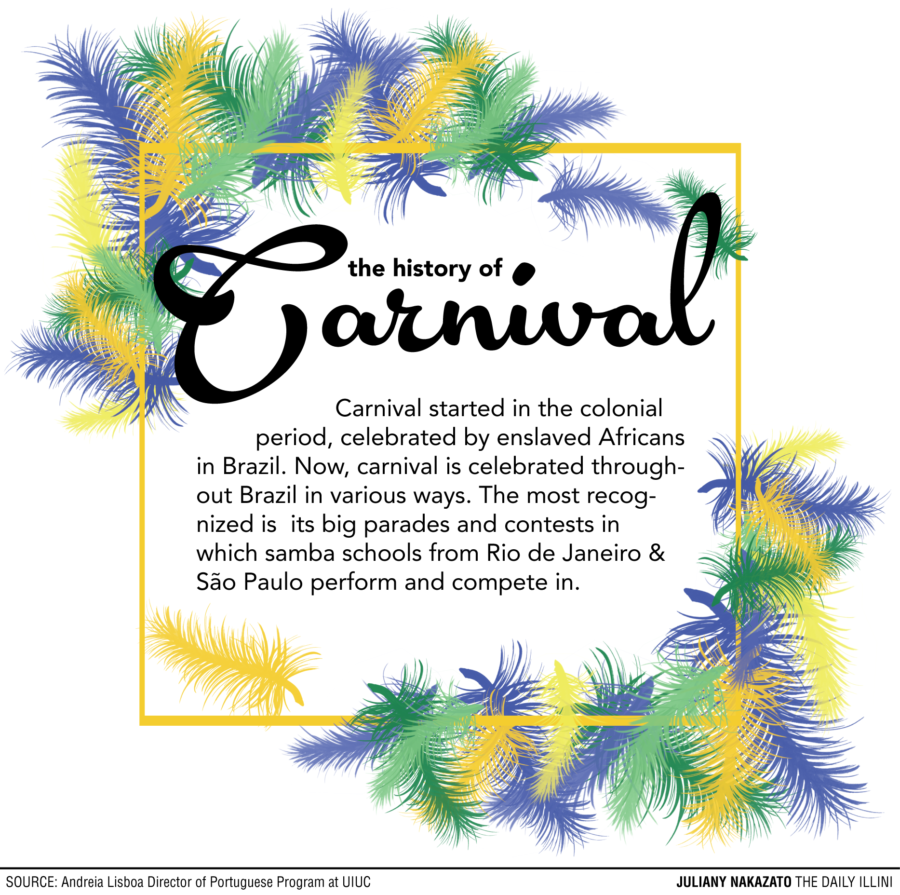 In Latin America, “Carnival” is known as a celebratory tradition of fun, freedom and life, where people don decorated masquerade-style masks and watch parades in city streets. Though “Carnival” has a common theme, it is observed differently from country to country.ej

With the goal of recognizing this cultural diversity, the University’s Center for Latin American and Caribbean Studies (CLACS) was inspired to sponsor a program entitled “Celebrating Latin American Carnivals” in collaboration with Champaign’s Douglass Branch Library. Alejandra S. Seufferheld, outreach and the Foreign Language and Area Studies coordinator for CLACS, said she hopes the program can expose Champaign-Urbana area youth to the diversity within the Latin American community.ej

The Carnival, held at the Douglass Branch Library on Wednesday, Feb. 3, is geared toward school-aged children.ej Participants are able to learn several songs in different Latin American languages as well as make carnival-inspired masks. Attendees can also watch a few educational videos about the different rituals that are staples of Carnival traditions.ej

But this program focused around the Latin-American celebration of “Carnival” is just one of the many activities that CLACS sponsors in collaboration with the Douglass Branch Library. Andreia Lisboa de Sousa, director of the Portuguese program within the Department of Spanish and Portuguese, said CLACS has created many efforts to reach beyond the campus community.ej

“With the library, we can reach more people, students from high school (and) elementary school, and to really promote the languages that are taught in Latin America: Quechua, Spanish, Portuguese, Creole,” Lisboa said. “So because of this idea of reaching and exposing students in the community to this language, we have been developing some activities, and one of them is the Carnival.”

“Carnival” in the Latin American tradition is typically a six-to-seven day celebration that takes place within the weeks leading up to Lent.ejDuring the festivities, partygoers engage in a wide range of tradition-based activities that vary from country to country, encompassing dancing, music, creative costuming and simply celebrating.

Sixto Clodoaldo Soto, University lecturer in the Peruvian language, Quechua, explained one of the Carnival traditions that his people celebrated while growing up in the mountainous regions of Peru.ej

“People do what they call ‘Cortamonte,’ which means to cut in the tree. … They get a big branch of any tree, sometimes very huge trees, and they plant in the plaza or in some specific place, and they dress the tree,” he said. “They put different kinds of presents, and the people start dancing around the tree and cutting the tree with an axe. Each couple has two or three hits to the trunk of the tree, and the one that makes the tree fall is the one in charge of bringing the tree for the next year.”

When the tree falls down, Soto said all the children rush to pick up the presents and candy.

In Brazil, where Lisboa is from, music is a major influence on Carnival festivities, and it speaks to the history and culture of the tradition.

“In the samba schools, it’s very beautiful because the lyrics are really history. There is a huge competition, so there are lyrics talking about Africans going to Brazil, the kings from Africa in Brazil, one about China and the history of China,” she said. “It’s so beautiful because the lyrics determined which kind of costumes, the colors, which kind of dance for the samba school, and you have sometimes 500 to 600 people in one school doing the parade.”

In Argentina, where Seufferheld is from, celebrations are centered around children and playing.

“Children dress up in costumes, dance and play with water,” Seufferheld said.

Argentina is not the only place where water is used to celebrate. Soto shared one experience he had during Carnival as a professor in Peru.

“One time I was teaching at (San Cristobal Huamanga University), and the students were chasing the girls with water,“ he said. “One class, two or three girls came together with me because they were thinking that these guys would not be prepared to throw water at me, and I also believed that.”ej

Before he knew it, Soto said the boys dumped a full bucket of water on him.

Tying together the differences and similarities among these different countries is important when trying to educate the public about the rich and varied cultures that make up Latin America, according to Lisboa.