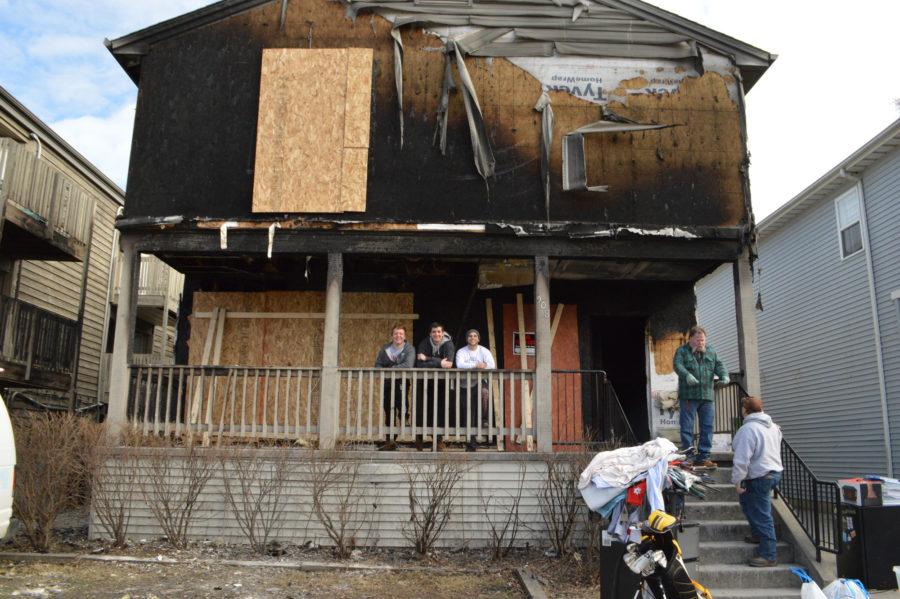 As the flashing lights and loud sirens of fire and emergency responders’ trucks contrasted against the dark hours of the early morning, senior Phi Delta Theta member Robert Penicook was in shock. Sitting in a provided bus, Penicook stared at the smoking, blazing shell of his home.

“At first I was just so blown away, I had no idea how that had even just happened,” Penicook said. “I was in absolute disbelief, mostly so glad everyone was okay, so grateful.”

On Jan. 22, the Phi Delta Theta senior house on 908 S. Oak St. caught fire in the early morning. According to the Champaign Fire Department, there were six injuries due to the fire, though Penicook clarifies that everyone was fine.

“I bruised my hip falling, my girlfriend burned her hand a little turning a doorknob, but we’re fine,” Penicook said.

Penicook said one of the first things he did after getting out of the house was make sure all of the 14 residents that lived there were accounted for and okay. For him to escape the house though was a process, he said.

“We tried to go downstairs, but there was this thick cloud of hot smoke, burning, keeping us from going back there. I shut the door, and then we all, there’s five of us at this point on the second floor, we ran to the right back room, looked out the window and saw all the other guys who had crawled out the basement window,” Penicook said.

“They were screaming, ‘You gotta get out of there, the entire place is on fire.’ So what we did was me and Troy and Grant folded Grant’s mattress in half, threw it out the window, dropped the girls down first from the two-story window, then we jumped.”

The Champaign Fire Department firefighters appeared on the scene at 3:51 a.m. and contained the fire by 7:06 a.m., just before sunrise.

The seniors received a plethora of support, from the emergency deans who came at 5 a.m. to the other senior houses that offered their homes as temporary living places to the parents who came down, Penicook said.

“We were offered to stay in a bunch of senior houses, a couple of our parents came down, a couple of us stayed in the chapter house. The younger guys were absolutely welcoming,” Penicook said. “Everyone was really helpful and that was awesome. It was amazing, the emergency deans were there at like 5 a.m. They contacted our professors for us, saw if we needed anything. They definitely made the situation feel a lot more safe and secure. We really cannot thank them enough.”

As of now, twelve of the seniors found apartments relatively close to each other, which was very important to the group, Penicook said.

“It’s our senior year and everything like that, we wanted to try and remain close,” Penicook said. “Six of us are in an apartment at the distillery, the other six are at an apartment on First Street, First and John. We are still within two blocks of each other, so we can still kind of stay together. That was an important thing.”

As far as future plans, such as paying for the $300,000 damages to the house, Penicook said it’s unclear.

“As of now, nothing is finalized. All that, I’m assuming is all I know. Roland will be in contact with us soon, everyone has been very helpful in terms of the investigation and everything. As of now, there’s no clear outlook for that,” Penicook said.

The cause of the fire is still under investigation.

“We’re going to spend more time on the scene, doing the scene examination,” Smith said. “It’s usually some time before the investigation comes out.”