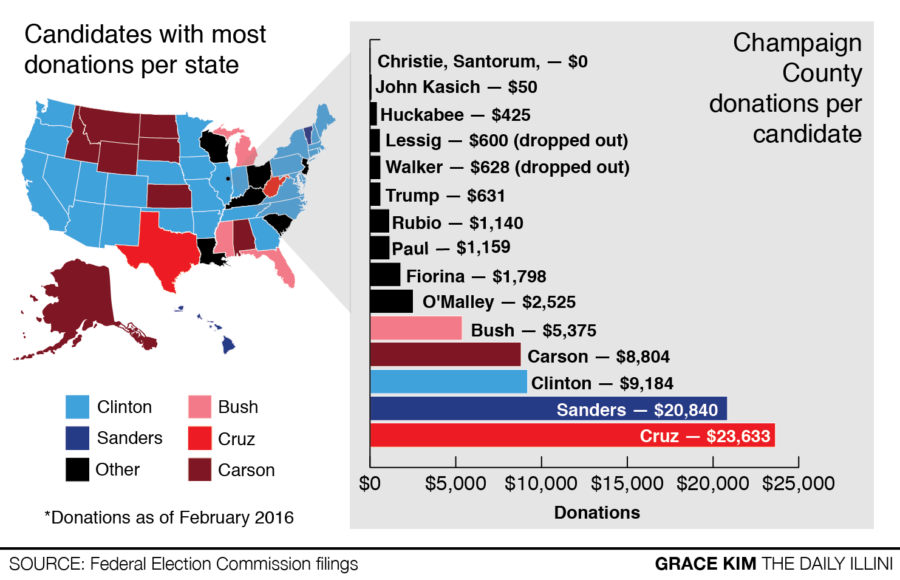 Presidential campaign donations from Champaign County residents spiked approximately 60 percent to $84,618 in the most recent numbers released from the Federal Election Commission on Monday morning.

But the county still only accounts for 1 percent of the state’s total of $8,178,857. Nationally, campaign donations rose to $430.9 millions. And while former Secretary of State and Democratic candidate Hillary Clinton leads the national race with $112 million raised, Clinton is still fourth in Champaign County with $9,184 raised.

Clinton still follows Republican candidate Ted Cruz, who has now raised $23,633 in Champaign County, Vermont Senator Bernie Sanders with $20,840, and retired neurosurgeon Ben Carson, who has raised $16,381 in the county.

A full breakdown of how much has been raised in Champaign County for all 15 presidential hopefuls can be found alongside this piece.

Champaign-Urbana isn’t a presidential political hotspot, at least based on the most recent filings from the Federal Election Commission.

But the excitement surrounding both Democratic and Republican candidates leading up to Monday’s Iowa Caucus has been felt for a while in C-U.

Just take the Urbana Market at the Square, where on a cool, mid-October Saturday morning, the “Feel the Bern 2016” shirts seem to be the dress code.

“I fully expect (Sanders) to win Champaign County in the March primary,” said Jehle, as she feeds crumbs from the remnants of a Cracked sandwich to her terrier, Pimm. “He’s the counterpoint to Donald Trump.”EJ

But Champaign County residents haven’t donated much money to match their enthusiasm for the 2016 campaigns, according to FEC filings.EJ

Illinois’ voters gave $5,310,546 as of October, a sliver of the U.S. total of $269.5 million donated to 2016 presidential candidates. Within Illinois, Champaign County registers at under 1 percent of the state’s total with $52,739 raised for both Democrats and Republicans.EJ

Just 96 county citizens donated money to candidates in the election, according to the filings, which candidates must report quarterly. The Daily Illini plans to update this piece with new numbers once the FEC releases them, which is to be expected this week. While the most recent number of cash donations may be low in comparison, local support for certain candidates continues to make an impact.

The 2016 presidential field is comparably larger than it has been in past years, but it’s also more diverse. The 15 presidential candidates that are still in the race are fighting to win over the support of voters from every socioeconomic class across the U.S. But according to a New York Times analysis, just 158 families, mostly upper-class white families, have funded nearly half of the country’s total raised.EJ

While the support for candidates like Sanders continues to be prominent around the community, many others are gaining traction financially with Champaign County residents.

One of the Republican party’s front runners, U.S. Senator Ted Cruz, is leading in the County with $20,882 raised.EJ And even though nationally, Sanders’ financial totals are double those of Cruz, at the time, Sanders was still trailing at No. 2 with only $9,908 raised within the County, according to the filings.EJ

Retired neurosurgeon Ben Carson is trailing third with $8,804, and former Secretary of State Hillary Clinton — who is winning the national financial race with $76 million raised — has collected only $1,318 from Champaign County.EJ

“We are the liberal hot spot in a desert of red,” Jehle said. “If you look at the presidential election, I think it was the first Obama election, you could tell Illinois was all red except for Chicago and the collar counties, they were blue. East St. Louis and Belleville, Edwardsville it was blue and here was Champaign County, blue.”

But for the 2016 race, Champaign County residents have only managed to bring in $13,826 for the Democratic candidates, compared to $38,913 for the Republican candidates.EJ

“We’re not going to see a lot of (presidential) candidates come through Champaign-Urbana,” he said. Harrison did say that candidates like Carson and former Hewlett-Packard Co. Chief Executive Officer Carly Fiorina have started to get the attention of Champaign-Urbana citizens, while real estate mogul and now-Republican favorite Donald Trump has had minimal success in the county, only bringing in $631 through two different donors.EJ

Harrison said despite the Republican party’s struggles within federal elections, local politics tend to lean red when it comes to Champaign-Urbana.

“We can win elections here,” he said. “Champaign is a large part driven by Republicans.”

Jehle said she wasn’t surprised about the lack of presidential donations originating from Champaign County. One ongoing issue that affects campaigns is the lack of student voter turnout, according to Jehle.

“I don’t understand why students don’t vote,” she said. “It’s like use it or lose it.”