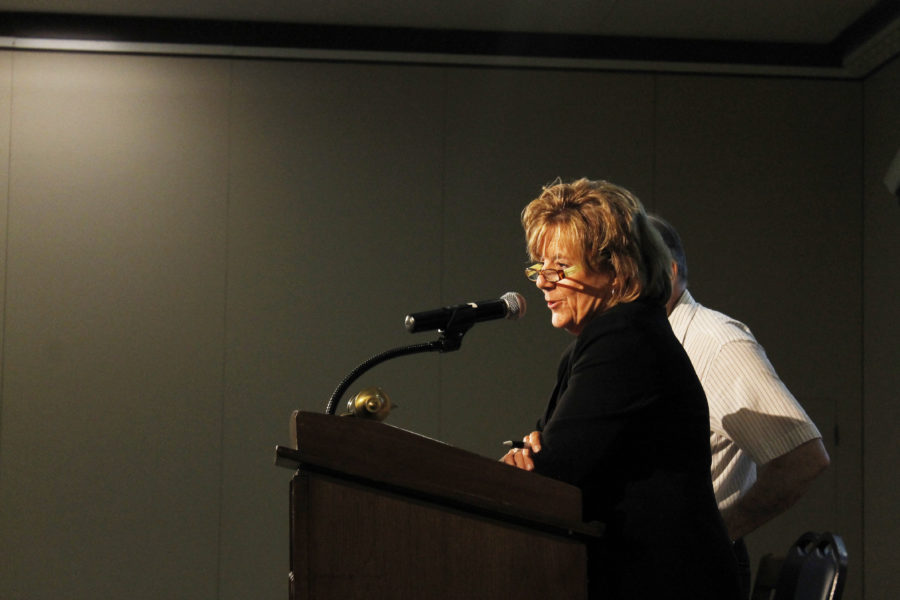 Wilson said the College of Medicine dean search committee is still on the hunt for someone to lead the college after it received 44 applications.

She said the committee hopes to name a dean by the summer and continues to plan curriculum for the new class of students expected to be enrolled in 2018.

“The search is going well,” she said. “(The announcement) should be coming soon.”

Wilson also said they are close to announcing the new Associate Chancellor for Diversity Efforts and Initiatives. She said the University continues to work with student leaders such as Ron Lewis of Being Black at Illinois, so students can, “think about inclusion in a more expansive way.”

The Academic Senate continued to discuss the uncertainty of the state and University budget at its meeting Monday afternoon.

“The state is really at a standstill in regard to the budget, and we are stuck in the middle,” said Interim Chancellor Barbara Wilson.

She said President Timothy Killeen is continuing to work on an agreement with the state. In the proposed agreement, the University would receive a three-year budget as long as the University meets certain metrics, such as graduation and retention rates.

She said Killeen received support for the proposed idea in conversations with the Illinois Caucus.

“It’s something that would give us a little more certainty over time,” Wilson said.

Interim Provost Edward Feser said a budget task force is also continuing to work on budget affairs at the University.

He said they recently sent guidance to the deans of different colleges that present strategies for revenues and cost reductions that are likely to come with decreased state support.

“We’re at this weird point where we don’t have a budget,” Feser said. “It’s a difficult time in terms of planning.”

He said they will initiate a comprehensive reform of the University’s budget system this semester that will address accounting procedures.

“We are very well aware that it’s hard for people to understand where money is coming from and where it’s going to,” Feser said.

Applications reached a record high this year, tallying in at over 37,000 applications to the class of 2020, with a 19 percent increase in applications from Latino and African-American students.

Around 22,000 students were notified of their acceptance into the University’s 180 different majors on Friday.

“There’s a heightened interest in business and in engineering and in STEM fields,” Wilson said.