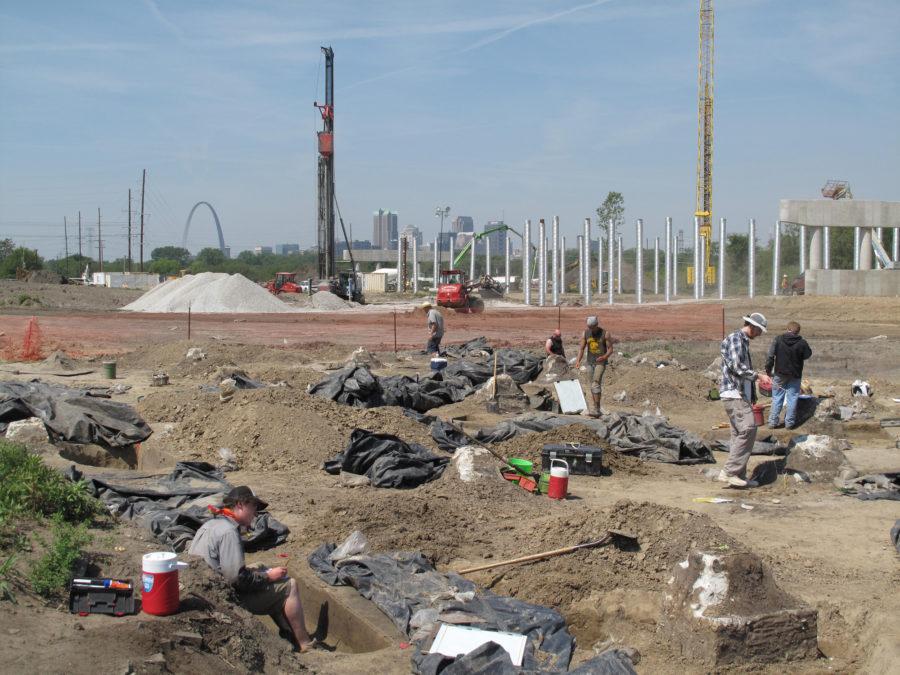 Courtesy of the Illinois State A

The University excavation crew works at the dig site while the St. Louis skyline looms in background.

When a team of archaeologists began a routine review of the site marked for potential construction plans on Interstate 70, one of the last things they expected was to find a city untouched for a millennium.

The Illinois State Archaeological Survey at the University discovered of 1,000-year-old city and uncovered artifacts dating back to an ancient Native American settlement.

The prehistoric city that was excavated is one part of an urbanized area that belonged to the Cahokia civilization. According to Joe Galloy, research coordinator for the American Bottom Field Station, the area encompassed by the Cahokia mounds – stretching from East St. Louis to Collinsville – would have been bigger than London at that time.

As Galloy and other archaeologists dug deeper they found remains of the city that were preserved by the concrete and development, instead of being destroyed.

“The scope of the work we did was so extensive and the significance of the discovery is so important. It’s something that’s never been done before,” Galloy said. “It’s wonderful to be a part of team that was able to pull off something like this, a very complicated project. It shows how archaeology is compatible with economic development.”

Although the excavation project ended in 2012, archaeologists are now spending time analyzing the artifacts and trying to understand the significance of them.

Tamira Brennan, field coordinator of the American Bottom Field Station, emphasized the importance of the findings after the excavation process.

“As the project started it was apparent that there were archaeological features still intact below the historical debris,” Brennan said. “We were able to see that the society became more organized and the material culture became more homogenous and then it backtracked to less organized. So now being in the analysis stage, archaeologists are trying to investigate the events and tie the results to the broader region.”

According to Brennan, approximately between six to eight thousand features were uncovered. As the team expanded the site search, they discovered that the site is the second largest Native American settlement in North America.

“One of the most important things was simply to show that there were intact archaeological deposits below (East) St. Louis,” Brennan said.

Many artifacts were uncovered, but one in particular stood out to the archaeologists: a figurine of a woman kneeling and holding a shell cup that had survived a catastrophic fire.

Alleen Betzenhauser, senior research archaeologist for the American Bottom Field Station, said that through working on the project, she found further gratitude for early civilization.

“I’ve always had an appreciation of what the Native Americans could accomplish and this gave me more of a direct connection to seeing the extent of the settlement: how big it is, the amount of effort and coordination required to build this urban area,” Betzenhauser said.

As a result of the excavation project, the team received an international award from the Shanghai Archaeology Forum of the Chinese Academy of Sciences in Beijing.

The team plans to publish volumes of archaeological raw data and interpretations of the artifacts and features.

“It’s one of those untold stories. It’s a surprise to people to find out that an important civilization was here a thousand years ago,” Galloy said. “I hope this work leads to a greater awareness of this ancient civilization, as it is something that needs to be preserved.”

Correction: A previous version of this article incorrectly stated that the area encompassed by the Cahokia mounds would have been larger than England. It should have stated the area would be larger than London. The Daily Illini regrets the error.

TWEET: U of I affiliated archaeologists have discovered a civilization in East St. Louis, untouched for a whole millennium