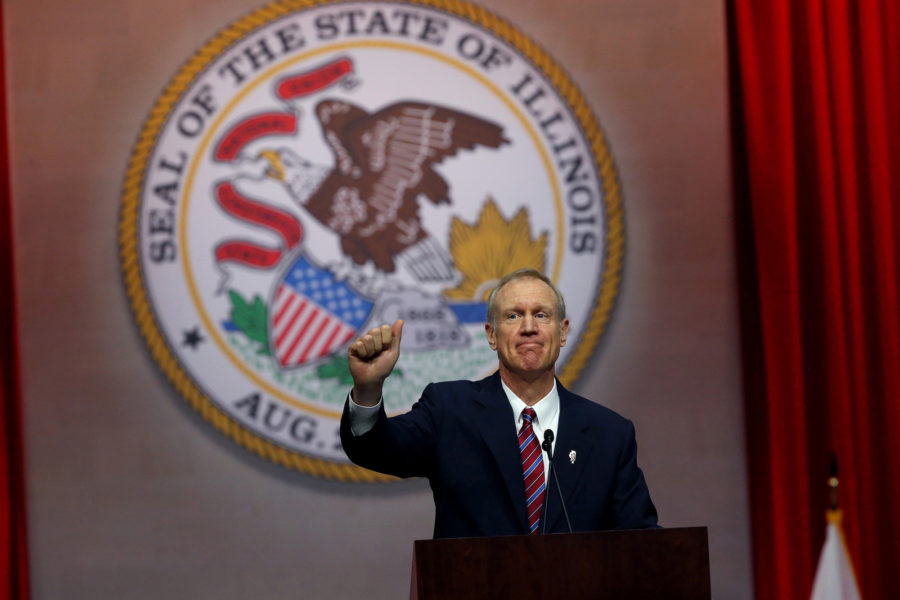 Gov. Bruce Rauner gives a thumbs up after giving his first speech as governor on Monday Jan. 12, 2015 at the Prairie Capital Convention Center in Springfield, Ill. (Nancy Stone/Chicago Tribune/TNS)

After months of a budget standstill, Gov. Bruce Rauner said he still can’t approve the state budget until it’s balanced.

“The truth is, we haven’t had a truly balanced budget in Illinois for decades,” he said in his budget address Wednesday morning. “In ways both obvious and hidden, we’ve overspent and raised taxes to cover it.”

A year ago, Rauner proposed a budget with $6 billion in cuts, which was rejected by the legislature.

Democratic legislators then passed a spending plan that was more than $4 billion over Rauner’s proposed budget; Rauner subsequently vetoed it.

The state hasn’t had a budget since July 1.

“That leaves us with only two choices: either you give the executive branch the authority to cut spending to live within our revenues.” Rauner said. “Or, we agree — together — on economic and governmental reforms, to accompany a negotiated balance of spending reductions and revenue, that ensures that Illinois can be both compassionate and competitive.”

Despite the uncertainty of the futures of Chicago State University and Eastern Illinois University, Rauner barely touched on higher education but said he hopes to increase K-12 education funding.

“Governor Rauner’s complete lack of support and funding for higher education while touting a education appropriations bill is a perfect example of the shortsightedness being used in this budget process,” said State Rep. Carol Ammons, D-103, in a press release.

“Higher education is a must these days and if Governor Rauner was truly in support of education and building a better future for Illinoisans, our universities and colleges would have been funded appropriately months ago,” she said.

Still, Rauner pledged to find a bipartisan solution to the budget issue.

“Ladies and gentlemen, the paths before us are well-defined. Now it’s time to choose,” he said. “With my hand outstretched, with a genuine desire to compromise, with respect, I humbly ask you to join me in transforming our state for the better.”