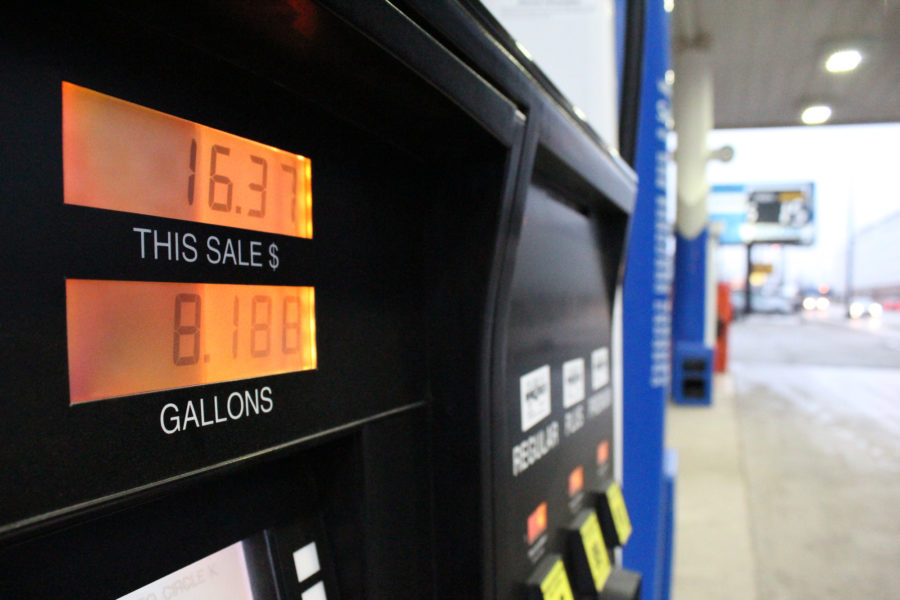 Gas prices across the nation have hit recent lows as a result of the fall of crude oil. The drop in gas prices is leading consumers across the U.S. and in Champaign-Urbana to spend more on other goods.

Bob Sinclair doesn’t keep his eyes on the gas meter as he fills up his Lexus RX350. In seconds, a click signals that the retired dentist’s SUV is filled back up; the pump reads $10.14.

Drivers across America like Sinclair have been feeling their wallets expand because of gas prices’ continued fall, a result of crude oil’s plummet on world markets. Crude oil has been trading at its the lowest since The Great Recession of 2008.

With the extra money, consumers are spending more on clothing, cars and online goods, according to Bloomberg. For the third straight month, Americans continued to spend more, and with an expected increase in airline ticket sales this summer, they continue to splurge.

While consumers are enjoying the low gas prices, the ramifications of the decline in crude oil is somewhat of a perfect storm, according to University Professor Scott Irwin, who specializes in agricultural and consumer economics.

Newer technologies, such as fracking, or the practice of high-pressure drilling to retrieve natural gas, have led to oil supplies growing. But when the economy in China, the world’s largest energy consumer, began to dramatically cool off, oil began to fall. In response to the fall of oil, Saudi Arabia, Russia, Venezuela and Qatar made the first international oil agreement in 15 years when the countries elected to freeze their oil outputs at January levels.

Now various industries and markets in the U.S. are hurting, including companies and regions related to energy production, according to Irwin. But the U.S. economy’s labor force has yet to take a direct hit from oil’s fall. January’s unemployment hit 4.9 percent, the lowest since February of 2008, according to the Bureau of Labor Statistics.

Champaign-Urbana residents aren’t exactly keeping track of where their newfound money is going. Instead, they’re simply spending more on things like groceries and eating out. The national average gas price officially fell below $2 a gallon on Jan. 11 for the first time in seven years, according to the U.S. Energy Information Administration. Gas prices in Champaign-Urbana officially are averaging at approximately $1.70, as of Tuesday afternoon.

“I imagine this helps a lot of people that have to commute for their jobs and stuff like that,” Sinclair said. “Monticello people go to Champaign-Urbana and Decatur. … People here come from Danville, I’m sure they appreciate it.”

Maria Lux drives an older, silver Subaru and has to travel the approximate 50 miles Northwest to Bloomington-Normal from C-U for work twice a week. Lux isn’t complaining about the low gas prices. For her, gas is a necessity, no matter the cost.

“I’ve kind of just accepted like I have to drive to certain places so I have to pay whatever it is,” she said as she pumped her tank full for $18.19, drastically down from the normal $40 to $45 she’s paid in the past. “It’s great if it’s cheap, but if it’s expensive it’s like, ‘Well OK, that’s what we have to pay.’”

But some other residents still are hoping for a continued fall of gas prices.

Derek Bell, of Gibson City, drives 22 miles to Champaign five times a week for work with his new construction company. Bell said that prices have already started to go back up from their lowest, and after having just bought a brand new silver Chevy Silverado with a trailer, he’s hoping at the very least that the prices plateau at $1.63. In the meantime, Bell is just hoping to continue to re-invest as much as possible to his new business.

“I know they’re way down compared to a couple years ago, and that’s amazing,” he said as he filled the Chevy, up to $20.01. “It’s a necessity, and I’d like to see it stay here or cheaper.”

While Irwin said the only consistent thing about crude oil is that it’s never consistent, he said the best analysis shows that the low oil prices will continue for the better part of the next 18 months.

“We’re blessed. We’ve got great low gas prices,” said Greg Purnell, a C-U resident who topped off the tank of his red Dodge Caliber for $10. “I’m just enjoying it as a consumer.”CC