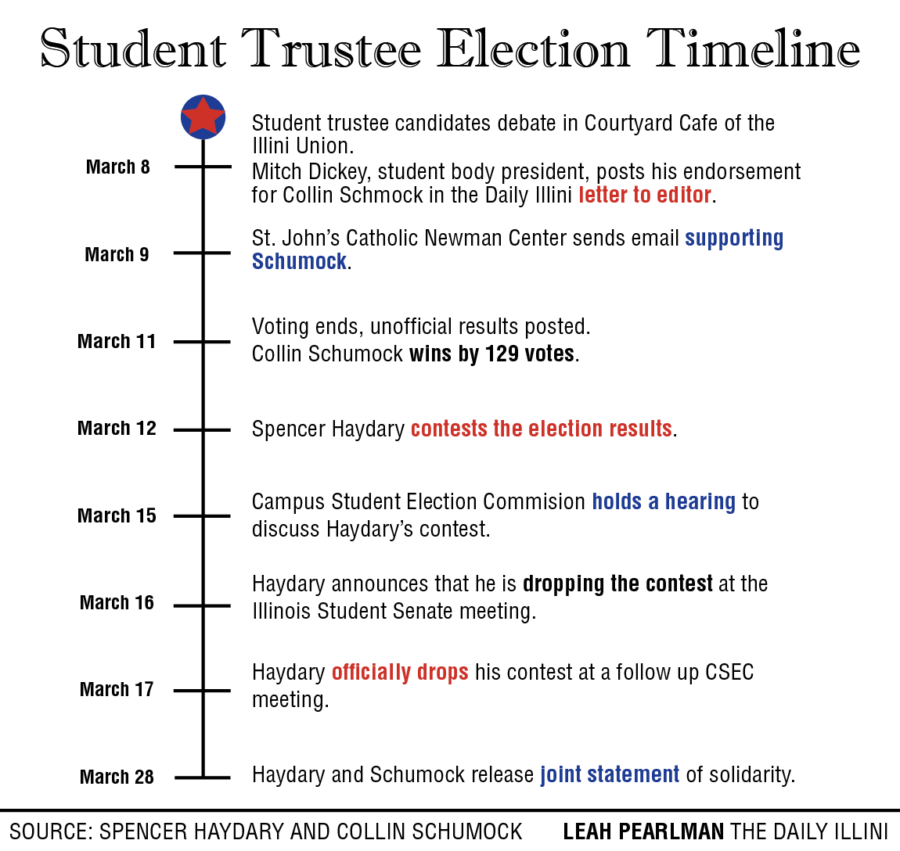 Collin Schumock and Spencer Haydary released a joint statement of solidarity in light of the student trustee election controversy.

Haydary and Schumock, both juniors in LAS, were the two main candidates for student trustee. Schumock won the election by less than 130 votes, according to the unofficial election results released March 11. The official results are not yet available.

Dickey’s endorsement was published by The Daily Illini as a Letter to the Editor on March 8.

Haydary said the endorsement from the student body president violated campaign bylaws and the constitution of the Illinois Student Senate at the hearing held by the Campus Student Election Commission two weeks ago.

However, Schumock said Haydary submitted his complaint too late after the election results and that Dickey’s endorsement did not violate the student senate constitution.

Since the hearing, Haydary has dropped his contest against Schumock. Shortly after, they released their joint solidarity statement.

“The reason I dropped my contest is because it was dividing our campus, and that’s not what I campaigned for,” Haydary said. “I campaigned to unite the campus. I don’t have to be the student trustee in order to resolve student issues.”

In the statement, both Schumock and Haydary said the contest of the student trustee election has resulted in “unnecessary division and disagreement” within the campus community.

“Therefore, we have jointly decided to drop our claims against each other and end the contest of the election,” they said.

Both Schumock and Haydary also agree that there needs to be some form of election reform. Specifically, Schumock said there are not clear definitions between a campaign complaint and an election contest.

“The rules as they’re written are fair, but in some cases, there needs to be things that are added, amended and clarified, and in some cases, some aspects need to be removed,” Schumock said.

Schumock said election contests are not uncommon when it comes to the student trustee position. In the ‘80s, a contest resulted in legal action and was brought to the courts.

“There’s a history of this happening, so we need to have an election system where there’s enough confidence in the results that we’re not having hearings every year,” Schumock said.

“If he really thought the right thing to do was contest the results, then he should have,” Schumock said.

In the statement, Schumock and Haydary stress that they will continue to work together on campus to advocate for mental health services, combat racism and discrimination, promote the values of ethics and unite the University’s diverse campus community.

“We have both enjoyed the campaign and election process. We met thousands of passionate, engaged students,” they said in the statement. “Although there is a lot of work to do, we are confident that the great Illini family will forge ahead to achieve our university’s mission of enhancing the lives of people from Illinois, across the nation and around the world.”