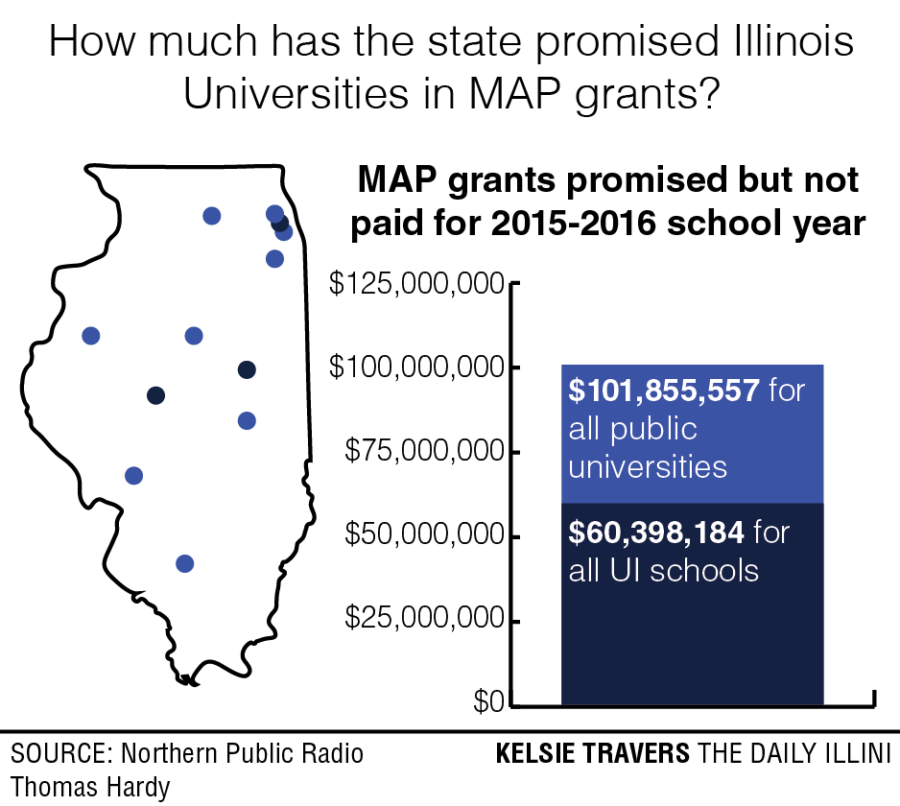 Matthew Eaglin wouldn’t be able to go here without the Monetary Award Program, MAP, grants. Eaglin, junior in Media, said he receives about $5,000 a year in MAP grant funds.

Eaglin said as a low income student, MAP grants have been a major help to him and his family.

“I don’t really see any other way to be able to go to school here without it, so just approaching my senior year I’m like, ‘Okay, am I going to have to take out any loans or do I need to ask the people of my scholarship for more money?’” Eaglin said. “If something happens, I’m at a dead end kind of.”

In February, Illinois Governor Bruce Rauner vetoed legislation that allocates $397 million from the state for MAP grant funding. Despite a proposal that passed through the Illinois Senate, the Illinois House of Representatives failed to pass the three-fifths vote threshold to override Rauner’s veto. Since then, there has been a lack of state MAP grant funding for Illinois universities and colleges.

In response, many Illinois colleges are paying for students’ promised 2015-2016 academic year MAP grants out of their own pocket.

With a state budget, ISAC announces the MAP grants to the schools, which then puts that estimated award amount in student financial aid letters. These MAP funds are then sent to the student’s university account to pay for tuition and fees.

“The grant is indeed an award to the student, but MAP funds are sent directly to schools on behalf of students,” ISAC Managing Director of Communications Lynne Baker said. “So the funds don’t go to the student directly, but rather to the student’s account.”

In a dataset compiled by Katie Finlon at WNIJ Northern Public Radio news, it was found that Illinois public universities are covering about $41 million in MAP grants for the year, not including the University of Illinois campuses.

The lack of MAP grant funding is a “casualty of an incessant, intractable budget impasse in Springfield,” Hardy said.

“Colleges and universities, including all three U of I campuses, covered the MAP shortfall for the fall semester and are doing so for the spring semester thus far in the expectation that funding will be approved,” Hardy said.

“I think it is kind of a thin line,” Eaglin said. “I think somebody said to me, like ‘Yeah, the school is going to cover it, but you’re going to have to pay it back later in life or whatever. I don’t know how that would affect us right now per say, but that is more a conflict between the University and the state. It’s nothing I can really do on that end.”

In a survey of MAP-approved universities and colleges done by ISAC, it was found that of the six schools that identified as public universities, two said they would require students to pay back any shortfall in MAP funding.

The Illinois Institute of Technology, a private school, recently announced that students will have to pay back their MAP grants for the fall 2015 semester.

“The fact is, for the schools that indicated they were crediting student accounts for MAP, most were undecided as to whether they would require students to pay any further shortfall in state funding,” said Baker. “I would expect that if there is not a state MAP appropriation in time for the 2016-2017 school year, there would likely be less schools able to cover MAP grants overall.”

The Urbana-Champaign campus specifically has 6,202 students promised MAP grants for the 2015-2016 school year, according to campus spokesperson Robin Kaler. Additionally, $25,920,619.61 in MAP grants for the overall 2015-2016 academic year was promised to these students. At the moment Hardy said there is no decision yet about having students reimburse, or pay back the grants, for the 2016 spring semester.

“Man this year… I mean [the MAP grant] did show up on my award letter,” Eagin said. “I haven’t gotten any emails saying I have to pay them back or anything, so it’s looking promising, but I don’t know.”

At the moment, there is currently a bill that awaits consideration in the Senate that will appropriate $397 million to ISAC for MAP grants. There is another bill that would also appropriate $397 million for MAP grants in addition to other programs. This bill awaits consideration in the House after being passed by the senate on March 17.

In the March 31 issue of The Daily Illini, the story titled “State short $100 million in MAP grants” said the governor vetoed legislation that allocates $721 million in funding for MAP grants. The bill actually allocated $397 million for MAP grants and the rest was for community colleges.

The design says $1,855,557 worth of MAP grants for the 2015-2016 academic year is covered by public colleges. Public universities are actually covering $140 million worth of MAP grants, according to Lynne Baker, director of communications for ISAC.

The quote “With a state budget, MAP grants usually are arranged between the Illinois Student Assistance Commission, ISAC, and the qualifying student. The college or university would then essentially be the facilitator of the transfer of the funds to the student,” inaccurately represented the process. ISAC awards the grants to the student and funds are sent to the school to go directly towards payment of the student’s tuition and fees.

The following “At the moment Hardy said there is no decision yet about having students reimbursed for the spring semester.” This is incorrect, the students would be the ones reimbursing the University.

The following “At the moment, there is currently a bill going through the Illinois Senate that will appropriate $397 million to ISAC for MAP grants.” This is incorrect, there are two bills going through the process right now

The Daily Illini regrets these errors.