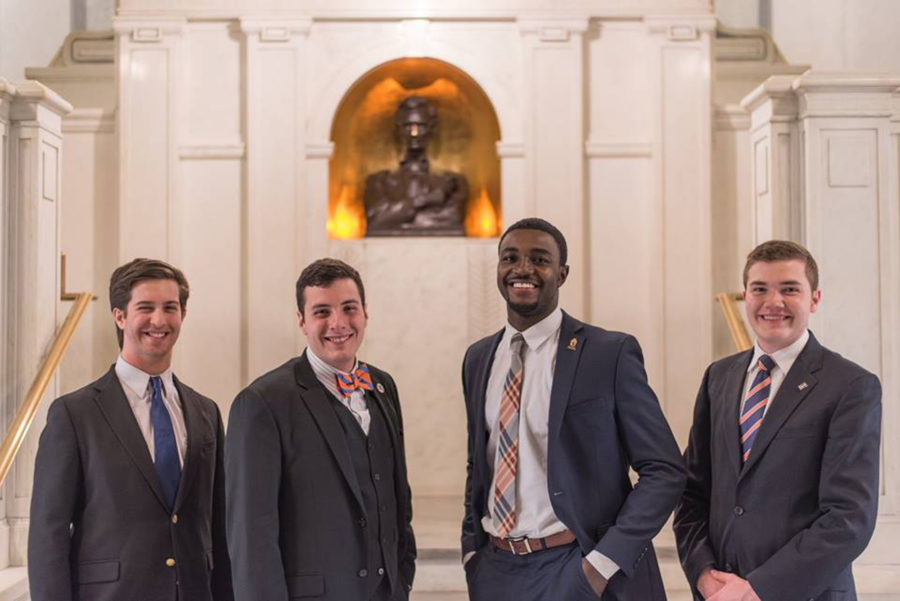 Lewis, junior in Business, won the majority vote for student body president and will serve for the school year.

His personal experiences at the University have made him passionate about representing the student body as a whole. His future initiatives prioritize the voice of minorities.

In his speech, Lewis emphasized his dedication to campus unity and the student senate’s commitment to the campus body.

“We need to be able to reconnect to the campus, which we represent as well as each other,” he said. “We represent the students, so if we don’t have that connection and work from the bottom up, all that we do wouldn’t be representative of the students.”

Villanueva, junior in LAS, was elected as student senate vice president – external. He emphasized themes of communication and growth within the senate and campus community.

“In order for the senate to improve, we have to grow, we can’t be stagnant,” Villanueva said. “We need to go to events, speak with RSO leaders,and encourage them and their members to tell us how we can help them.”

He spoke on the issue of developing a constitution which has been in the works for months.

“We really need to get a constitution going. We need to have a constitution ready to go and that’s up to the vice president – external for the fall,” Villanueva said.

Haydary, junior in LAS, won the seat for vice president internal. He said his short time on campus did not correlate with a lack of passion or insight for the community.

“When I got here, I got involved, joined committees, and went to iHelp. I jumped right in and I would jump right into the position of vice president,” he said. “I would show the same energy and resolve that I have thus far.”

Senators also discussed the efficiency within the senate multiple times. Haydary focused on specific plans for the ISS that he felt were important in combatting this issue.

“I want to develop a training program for new senators. I want everyone to feel like they are of value and capable of making decisions,” Haydary said.

Braganca, freshman in LAS, secured his spot as treasurer, with plans for improving student life, specifically through transportation.

“I spent most of the year working on charter bus services. I’ve worked on getting better alternatives for charter buses because that’s a service that affects thousands of students and it’s something that could easily be changed,” Braganca said.

Braganca spoke about what success meant to him personally, as well as what it meant within the student senate.