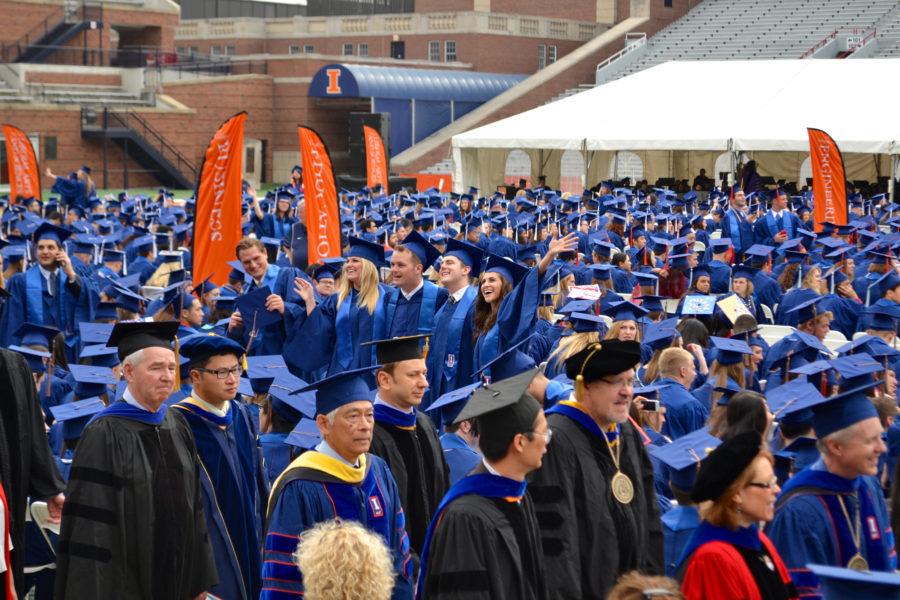 Graduates pose for photos as University officials enter Memorial Stadium for commencement on May 16, 2015.

Huber then worked as an engineer and senior executive at Google from 2003 to 2016. His work at Google included an integral role in developing products such as Google Maps and Gmail.

Since leaving the Google, Huber is now serving as CEO at Grail. Grail is committed to cancer research and medical technology advancements and was founded in memory of his wife, Laura, who passed away after a late cancer diagnosis.

Grail’s latest experiment involves “liquid biopsy,” which helps indicate forming tumors and tracers of cancer DNA in blood. With this technology helping to detect cancer earlier, “80 to 90 percent of cancers can be cured with current treatments,” Huber said in an interview with CNN.

Among the investors of Grail include Microsoft founder Bill Gates and Amazon founder Jeff Bezos.

Despite State Farm Center being a past spot for commencement, Senior Director of Events Laura Wilhem-Barr said that it is still going through renovations, so the ceremony will continue to be outside in Memorial Stadium this year.William Sanders, the head of the Electrical and Computer Engineering department said in a massmail he sent to the department, “I’m gratified and honored to announce that Jeff Huber … will deliver the campus commencement address this year. This is a testament to the great ways ECE Alums are changing the world!”