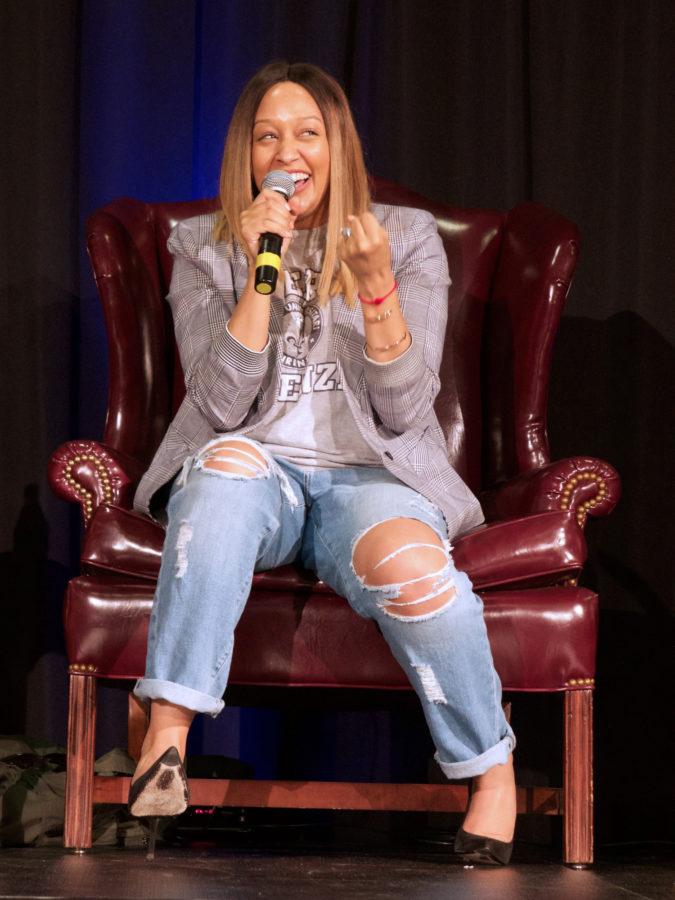 Tia Mowry talks to students about college at the Illini Union on March 30, 2016.

When Tia Mowry and her husband, fellow actor Cory Hardrict, enter a parking lot, they often turn left, even when the signs say to turn right. But this took Mowry years of getting used to. As a self-proclaimed “good-girl,” she still wants to follow the arrows that tell them to turn right. However, as Hardrict points out, they don’t tell you not to go left.

So they do go left, and Hardrict usually finds the closer spot.

Speaking to a crowd Thursday night as part of the Illini Union Board’s March Lecture Series, Mowry, formerly of “Sister-Sister,” credited determination to stand out for her long, successful career in television.

Mowry ended each question that she answered with advice, parlaying her life stories as tips for the college audience. She discussed many things, from diversity on television to believing in yourself.

Mowry even provided advice to a set of twins struggling with one’s partner who couldn’t tell them apart.

She gave a look and said, drop the man.

But she noted that the place she learned the most about herself wasn’t on the red carpet or even in Hollywood — but in college.

“I wanted to discover myself. I wanted to find out who I was. You don’t really know that, unless you have all of these possibilities in front of you,” she said.

Until she attended college at Pepperdine University in Malibu, California, Mowry’s life was comfortable. She was surrounded by her parents and siblings. Her drill sergeant mother gave up her military career to let Mowry and her twin sister Tamera focus on acting. This decision ultimately led to their breakout role in the WB sitcom Sister, Sister in 1994.

“Growing up, my parents were very happy with my sister and I and even my brother pursuing our dreams,” she said. “But what was more important to them than that, was our integrity, our character.”

But for Mowry, it was the freedom of college — specifically studying abroad — where she took her parent’s wisdom and matured on her own.

“So there I was growing up into this woman. I traveled abroad, I was dating, I was cheated on, I got hurt, so I say this to say, I was experiencing life as this young woman,” she said.

It was not until seven years after Sister, Sister ended that Mowry landed her next television starring role in BET’s The Game.

But not everyone wanted her for the role — not even herself. With her signature loud, deep laugh, Mowry recounted how Hardrict helped reassure her that she was right to audition. Building on her college experiences, she wanted to showcase her abilities in a more mature role.

“I had to fight for that role, because everybody was like ‘Oh, that’s the girl from Sister, Sister’,” Mowry said.

Because of her drive, she has become something of a television jack-of-all trades. Mowry has worked on everything from sitcoms to reality television. But now, she said she is showcasing her true self.

“I don’t do it just for fame, or for money,” she said. “Everything that I do, I have to be passionate about it.”

While reminiscing on the importance cooking had on her childhood — her family often made dinners together because they could not afford take-out — Mowry discussed her new Cooking Channel show Tia Mowry at Home.

“My mom told me this: She said, ‘no matter what job you have, if you are passionate about it, you will find success’,” Mowry said.

So she’s taken this advice and she only takes roles she is passionate about. She can currently be seen recurring on cable dramas in both Fox’s drama Rosewood and this summer on ABC’s Mistresses.

But these new dramatic roles hold a different importance — they are personal.

Notably Sister, Sister and The Game occurred on cable channels, but her two new programs are on broadcast networks.

“They were networks that catered to African-Americans. Which is great and awesome, but I am seeing a change in that,” Mowry said.

Rather, Mowry wants to see herself and all people represented on television screens.

“I want to be able to watch a television show and be able to say ‘oh my gosh, I relate to that’,” Mowry said.

Mowry’s flair for inspirational anecdotes stems from other women sharing them with her. She said she wants to continue creating a community where people support each other. Life is hard enough as it is she said.

Her advice to college students: study the greats in your field.

“Once you’ve mastered how to constantly get up after being knocked 1,500 times, eventually somebody’s going to open up that door,” Mowry said.

And sometimes that door is found by turning left in a parking garage.