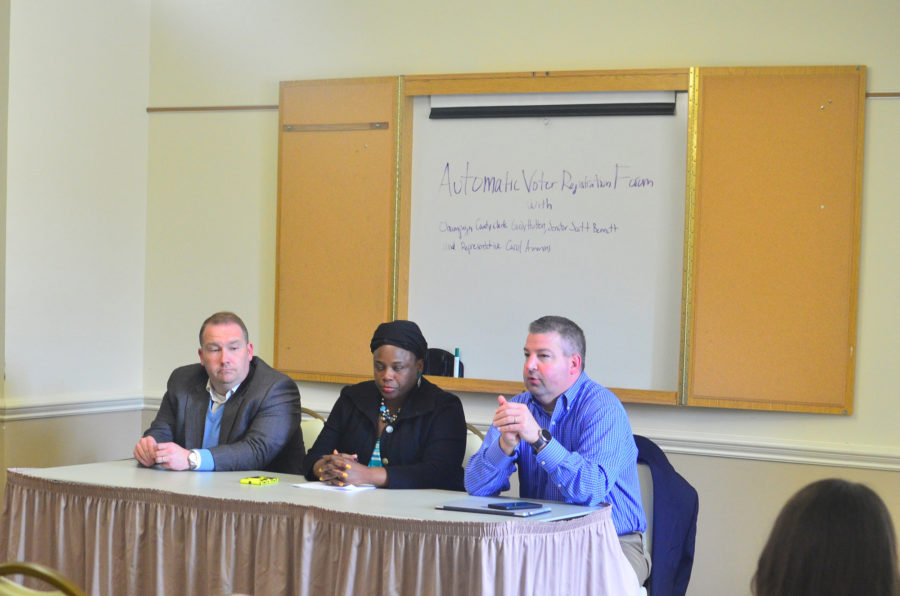 A public forum was held at the Illini Union to discuss automatic voter registration last Thursday, March 31. Students at the University and members of the community gathered to express their curiosity and qualms with the voting process.JT

Voters would automatically be registered to vote in their new district whenever they update their address with the state, if it becomes law.JT

“Essentially it means that every time you update your information with the Secretary of State’s office, the information gets put in a master database and forwarded to local election administrators so we can keep the voter registration address up to date,” said Gordy Hulten, Champaign County Clerk.

This system has already been implemented in other states such as Oregon and California.JT

“It is a very simple process, and in reality should exist already,” said Carol Ammons, member of the Illinois House of Representatives. “Unfortunately, we haven’t been as progressive in technology. The government’s talking about how to fix some of our technology roles in the state of Illinois.”

However, there are financial and technological limitations within the state which are impeding the progression of this bill.

“It will cost a significant amount of money,” Hulten said.

Concerns about automatic registration led to discussion on the voting system and voters’ mentality in the United States.

“In the primary election, we just had almost 60,000 votes. 7,000 of those were election day registrations,” Hulten said. “We need more technical equipment, better training for our election judges and more judges to avoid some of the lines that we saw at the primary election”.

Despite increasing turnouts, many registered voters don’t exercise their liberty on election day. The panel was asked their opinions on why the voting rate is so low in America compared to other developed nations.

“In many other nations where you have higher turnout, you have a longer period of time to vote. Often it’s weeks or months where you can cast your vote,” said Scott Bennett, Illinois State Senator.

“In our presidential elections, which start three or four years out, there’s a malaise or apathy that comes along with that. People pretty much hate all the candidates by the time the election comes around,” Bennett said.

Despite America’s lower turnout, legislators are focused on making the process easier and more convenient for those who do come out on voting day.

“I’m excited about the legislation and the negotiations that will take place in the next few months to try to get us at least one step further towards a universal registration process,” Ammons said.

“In Champaign County, we want to make it so that every eligible voter has the ability to vote. That’s always been our commitment,” Ammons said.

Though the initial costs of automatic registration are high, in the long run, it would reduce the number of people and steps involved in the process.

“(Automatic registration) requires an investment and I think the investment is worth it,” Ammons said.