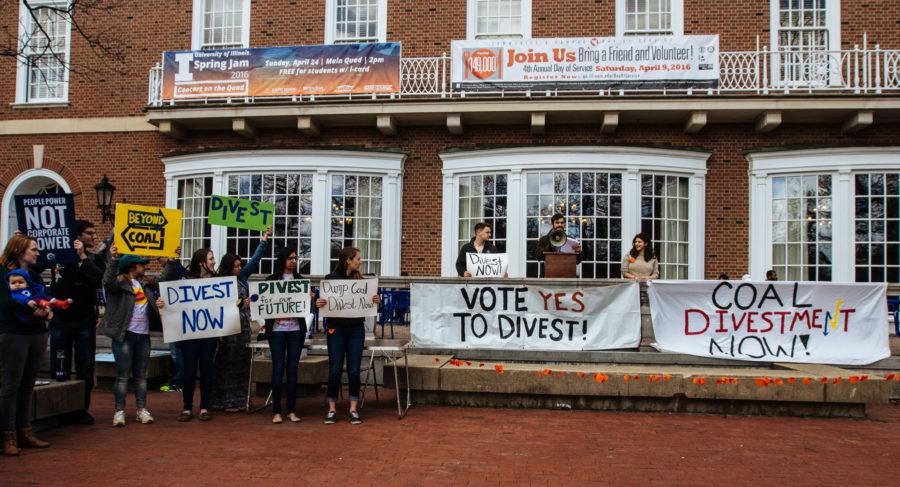 UIUC Beyond Coal organizes a student rally before the Academic Senate's votes on divestment of coal interests at the University Main Quad on Monday, April 4.

Athena, a 9-month-old infant, was in attendance at Beyond Coal’s rally Monday. While she couldn’t speak words or even hold a poster in support of divesting from coal, she represented something bigger — the future.

Joe Edwards, co-president of Beyond Coal and Athena’s father, said his daughter is part of the reason he continues to fight for the University to divest its $5.1 million holdings in coal industries.

She, along with future generations, will have to deal with the environmental impacts of climate change, he said.

The Academic Senate made two moves Monday in support of decreasing its harmful environmental impact at the University.

The resolution in support of iCAP was unanimously approved and urges the University to make the plan’s goals a top priority by giving funds and human resources.

Some senators expressed concern over the recommendation of spending money toward iCAP when the state has still not approved a budget and is preparing to make cuts. Additionally, the presentation did not present any financial information regarding how much the iCAP goals would cost.

Ben McCall, associate director for Campus Sustainability, said that with the state budget impasse, people often ask if the University can afford to work on sustainability.

However, he said the cost of inaction is greater, not only for our environment but for the future of the students. The University has been a leader in environmentally sustainable initiatives and needs to continue the charge, Interim Chancellor Barbara Wilson said.

A rally was held before the Academic Senate meeting in support of divestment and was hosted by Beyond Coal, an organization that has been fighting for divestment since 2011.

Genova said the industry has lost 97 percent of its stock value over the last four years.copy: http://www.marketplace.org/2016/02/10/world/blocking-us-emissions-rule-wont-save-coal-industry

“During a time where we are constrained in a very serious budget crisis, it makes absolutely no sense to invest money in something that has lost its value,” she said.

While Marshaun Montgomery, Illinois Student Senator and author of the resolution, feels happy the resolution passed, he knows there is still a long way to go.

To start, students and Beyond Coal members will begin meeting with the Urbana-Champaign campus treasury to ensure campus-level funds are switched to socially responsible investment funds immediately.

Montgomery said he hopes to reach out to the University’s Chicago and Springfield campuses to see what the faculty and student body think about coal divestment in hopes to receive their support to pass along to the Board of Trustees.

The ultimate goal is ensuring both the board and the University of Illinois Foundation’s board of directors will switch their funding and divest.

More than 458 institutions around the world have committed to divest $2.6 trillion in assets according to the resolution passed by the Academic Senate.

The campus is trying to achieve climate neutrality by 2050 through iCAP, which was created in 2010 and updated in 2015. The University recently created its first on campus solar farm, and another part of the plan is to encourage the campus to not expand its square footage of the campus.

The Beyond Coal organization plans to ensure the vote is enacted. Edwards said that they are no longer a bunch of students pushing now, but they have another governmental body behind them.

He says his daughter is what continues to motivate him to keep pushing.

“When you’re working for the future and when you have your child physically in front of you, it’s a lot more inspiring than just doing it for yourself or general environmentalism,” he said.