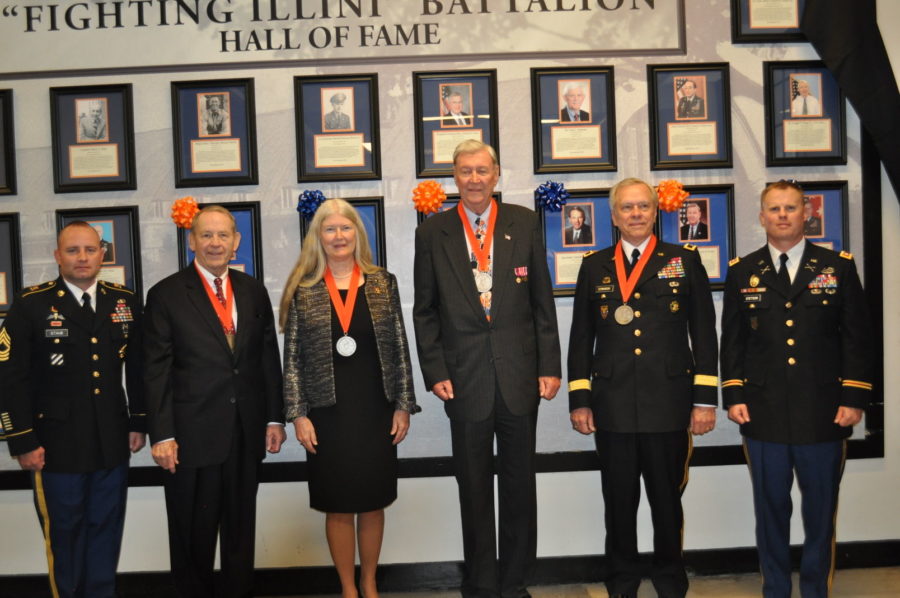 Four University ROTC alumni being awarded their medals at the 2014 Hall of Fame ceremony.

ROTC will be hosting their third annual Hall of Fame Ceremony on April 8 to commemorate some of the program’s alumni.

The Hall of Fame began in 2013 and currently holds 22 people, with five more being inducted next week.

Erin O’Neil, senior in Linguistics and the Cadet Public Affairs and Recruiting officer for the Army ROTC program, said the Hall of Fame was created “in order to commemorate and recognize some of the alumni who have gone through the ROTC program.”

The alumni are initially nominated based on leadership excellence not only in their military career, but their civilian career as well. Then, the final decision is made by both previous inductees and the Department of Military Science Cadre in an open board process.

The ceremony is ran in part by Military Science Professor Lieutenant Colonel Christopher Leung with coordination by Master Sergeant Jason Staub in conjunction with other Cadre members and Cadets.

The Hall of Fame Ceremony starts in Huff Hall where a power point is shown with pictures from when the ROTC program first started all the way through today, O’Neil said. Then, then five inductees biographies are shared along with why they were inducted. At the end, the inductees are presented with a special coin and then brought from Huff Hall to Armory where their picture is unveiled on the Hall of Fame, O’Neil said.

O’Neill said part of the meaning of the ceremony is to bring back alumni and show them how the ROTC program has changed to what it is today.

“We want to commemorate all they’ve done because they’ve done something spectacular to come into the Hall of Fame,” O’Neil said.