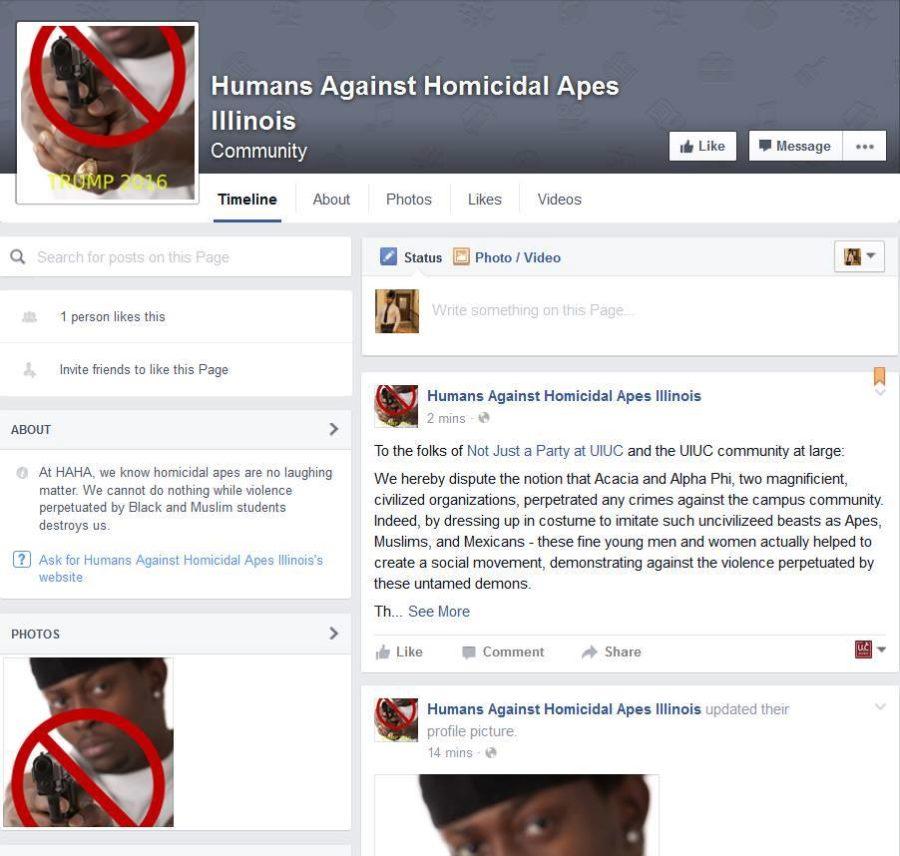 The statement said the page,“While obviously a hoax, created by a deeply racist and hostile individual, the mentality demonstrated in such rhetoric is without a doubt shared by some of the students on this campus.”

Vice Chancellor for Student Affairs Renée Romano released a statement about the Facebook page Friday and said, “this week we have seen an anonymous Facebook post titled ‘Humans Against Homicidal Apes Illinois’ aiming indefensible and inexcusable racist insults at members of our campus community.”

Despite noting that freedom of speech and expression “is a foundational principal (sic) of this university,” Romano called the page “reprehensible” and “a supreme act of cowardice.”

“It most certainly goes beyond speech that we can defend, and we strongly condemn its message and language,” Romano said.

Romano said that the incident is under investigation, and that if those that are responsible are identified and turn out to be members of the campus community, “any and all appropriate actions” will be taken as allowed by the Student Code and University Statutes.

“It is disappointing, frustrating and maddening that there are those in our society who seem intent on trying to divide us,” Romano said. “As a campus community, we are better than this.”

Gioconda Guerra Perez, director of the La Casa Cultural Latina, sent an email saying the campus Latina/ Latino community has also faced racist attacks with recent messages on the sidewalks in front of the Department of Latina/Latino Building, such as “Build the Wall” and “Trump Deportation Force.”

“These actions are unacceptable and we firmly condemn them,” she said.

The Black Students for Revolution and Students for Justice in Palestine’s statement addresses the University administration claiming it has “repeatedly disregarded our humanity and safety to coddle the feelings of racist students and alumni.”

“We have lost our faith in you ever addressing our righteous concerns with enough effort to produce justice without first being forced to do so through radical student action,” it said.

Interim Chancellor Barbara Wilson has sent two mass mails this year regarding free speech and first amendment rights, after students created a White Student Union Facebook page in November and recently wrote “They have to go back” and “Build a wall” in chalk near the Department of Latino/a studies building.

“The University’s mass mails cannot protect our communities from the violent bigots who form pages like Humans Against Homicidal Apes Illinois and the Illini White Student Union,” the Black Students for Revolution and Students for Justice in Palestine’s statement said.

The statement said they will no longer direct statements to “ineffective and inadequate administrators,” but instead direct their words toward communities “that we seek to organize to soon topple the system.”

The “Humans Against Homicidal Apes” page directly addressed the independent student activist group Not Just a Party at UIUC who condemned an alleged racist event and photo by members of the greek community on campus.

“Indeed, by dressing up in costume to imitate such uncivilized beasts as Apes, Muslims, and Mexicans – these fine young men and women actually helped to create a social movement, demonstrating against the violence perpetuated by these untamed demons,” the statement said.

The page also posted, “Join us if you want to see Trump elected president, so he can rid us of our infestation and Make America Great Again! By Great Again, we mean pre-1865!”

The comments by the Black Students for Revolution is the most recent of a series of events occurring among the campus community concerns racism and student organizations.

The Acacia fraternity and Alpha Phi sorority apologized Thursday “for any offense we have committed to any students on campus or online who were offended by any part of the picture shared.” The statement came after a photo of a “Spring Break” event was shared heavily on Facebook.

Late Thursday night, Not Just a Party’s formed a Facebook page and released a statement in response to Alpha Phi and Acacia’s comments. The statement called for a three-year suspension of Acacia and Alpha Phi and any other organization that holds a racist party, theme event, or gathering of any kind or has members associated with one.

Other demands include an immediate institution of a US Minority general education requirement and mandatory diversity training for Greek organizations.

“Our tuition and fees must not be used to fund organizations that hold racist parties,” it said.

Robin Kaler, Urbana campus spokesperson could not immediately be reached for comment.