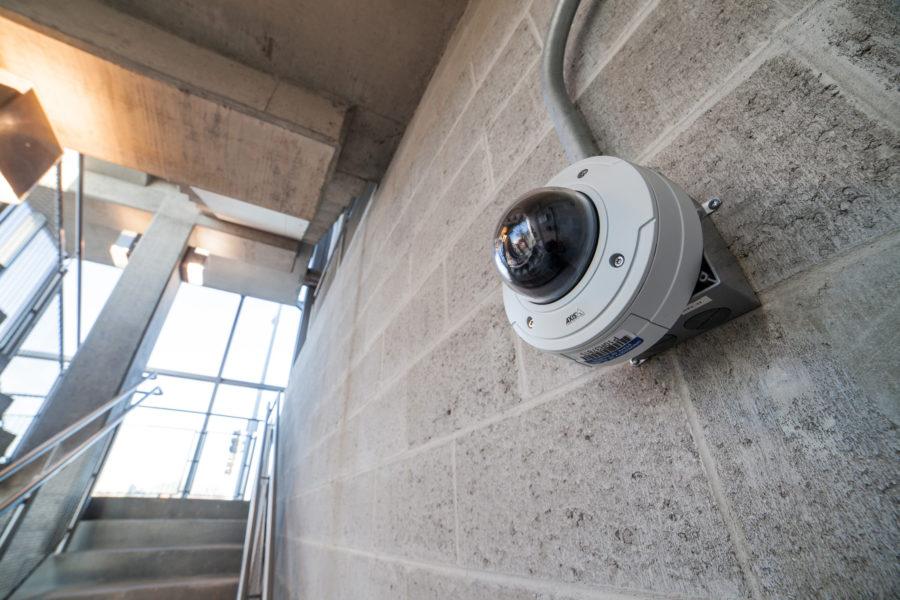 A security camera seen on the wall of a parking garage at the northeast part of the campus at the University of Illinois Urbana Champaign on Sunday, April 10, 2016.

The push for this safety tool to help fight and prevent crime started nine years ago in response to an increase in availability of better technology.

The security cameras are strategically placed in different areas on campus, including outside residence halls, academic halls and on the main Quad. While cameras may be found inside academic buildings and common dormitory area, UIPD makes sure to refrain from placing them near University offices and living areas.ag

“Cameras give us the ability to review what happened and a lot of times we get a good image of the person’s face, the clothes they were wearing, or car they were driving – we can make identifications off that video,” Wade said.

While Wade acknowledges the difficulty in directly correlating security cameras with a decrease in crime rates, these cameras are one of the many important factors that help keep campus safe.

“In 2015, we used security camera footage in about 50 separate investigations,” Wade said. “They were key in solving those crimes in about 30 court cases.”ag

Because the police lack the time and resources to monitor crime on a day–to–day basis, they only actively cover major events such as football games, marathons, or Unofficial St. Patrick’s Day, Wade said.

When the police receive a crime report, they go back to the location and see if there is any footage from the incident. This video coverage is collected and saved for 30 days. agWade said the centralized system allows for the police to know where the security cameras are, ultimately helping to predict crimes.

The new system is a drastic change from the previous individual security cameras on campus, Wade said. The old approach was not unified or convenient for police officers.

In this current system, cameras are purely a visual aid and serve as an extra set of eyes for the Police Department meaning they do not have audio capabilities. Wade said UIPD worked closely with the American Civil Liberties Union to make sure that privacy was not an issue for the University.

In this initiative to create a safer campus, UIPD also consulted with the University’s Technology Services.ag

Brian Mertz, media, information, and communication manager at Technology Services,ag said that they primary install and maintain the centralized camera network. Additionally, they provide administration of the servers, software and video storage.

Mertz said that the University buys about 200 cameras annually through the Division of Public Safety. The cost to maintain them is “fairly inexpensive.”

“The cost of installation varies depending on the type of camera, it’s location in a building, and existing infrastructure,” Mertz said. “The cameras have an expected life cycle of approximately 10 years.”

For Nikita Dekate, freshman in LAS,ag while there is little harm in having these cameras, she does not see them as fully effective.

“I feel like it would be beneficial as it is easier to access the footage (and) easier to retrieve. In terms of whether or not it is necessary, it depends on the situation and the place. I don’t feel like it is as necessary to have it in dorms, but in areas where crime arises, more is necessary,” Dekate said.

The University’s crime rate ranks in the middle compared to other Big Ten schools. Wade said that our community will never be entirely crime free, but UIPD’s intention is to protect the community as much as possible. For Wade, this is most effective through the use of security cameras.

“Thats our philosophy: We want to be able to keep an eye on what’s going on, but we want community members to be empowered and educated,” Wade said.